Enrichment week for our Centre Boys Ron, Little C., Smart and Blonde started off with a simple scent test. Earthwatch volunteers Bobbi, Rosemary, Ed, Craig, and student intern Jamie started by making papier-mâché balls. Once dry, Blonde and Ron (our test cats) were exposed to the following scents: mixed herbs, 5 roses tea, rooibos tea, ginger, garlic, cloves, cinnamon, earl grey tea, and coriander. Ron and Blonde were separated from the others, and each other (to avoid fights and outside interference), as each scent ball was placed in their yard. Ron was less than impressed with the exercise and had zero reaction to all 9 scents, while younger Blonde showed interest in mixed herbs, coriander, and ginger. Even though Little C. was not directly exposed to the scent balls, he was rubbing his neck along the fence line, so keepers and volunteers suspect that some of the scents became airborne and he was reacting to those scents.

After determining what scents would provoke the best response, Earthwatchers started to construct Ziggy the Zebra out of cardboard and papier-mâché. Once Ziggy was dry, and all scented-up, including 2 meat treats hidden inside his ears, he was placed next to the termite mound in the boys’ yard, all the while the boys were attentively watching Ziggy’s every move! When the gate was opened the boys cautiously approached their new pen-mate. Blonde and Smart were the first to reach Ziggy, and with the wind helping sway Ziggy back and forth, it made him seem even more life-like. Smart hissed, and Blonde pounced, grabbing Ziggy by the side, pulling him down on his butt. After that it was a series of tugs and pulls by Blonde, who then laid down on his side to paw at Ziggy’s legs while Smart and Ron licked and chewed Ziggy’s body. Little C. came over once more meat treats were added to Ziggy and proceeded to carry Ziggy around in his mouth, shake him from side to side. All in all it was an entertaining sight for staff and volunteers, and the cats appeared to also be enjoying themselves.

This whole while, Tiny next door was pacing at the fence line, waiting for her turn at Ziggy! When the boys had exhausted themselves, Ziggy was moved into Tiny’s yard. After some hesitation, Tiny grabbed all her courage and approached the swaying Ziggy. A few seconds later Ziggy was being dragged off by the tiny cheetah (keep in mind Ziggy is bigger than Tiny!). And she was able to enjoy the zebra all to herself, as Hermione, Harry, and Polly were too busy being lounging cheetahs. Tiny thoroughly enjoyed the papier-mâché head as when she pounced on it, a meat treat popped out, and was quickly eaten up by Tiny. 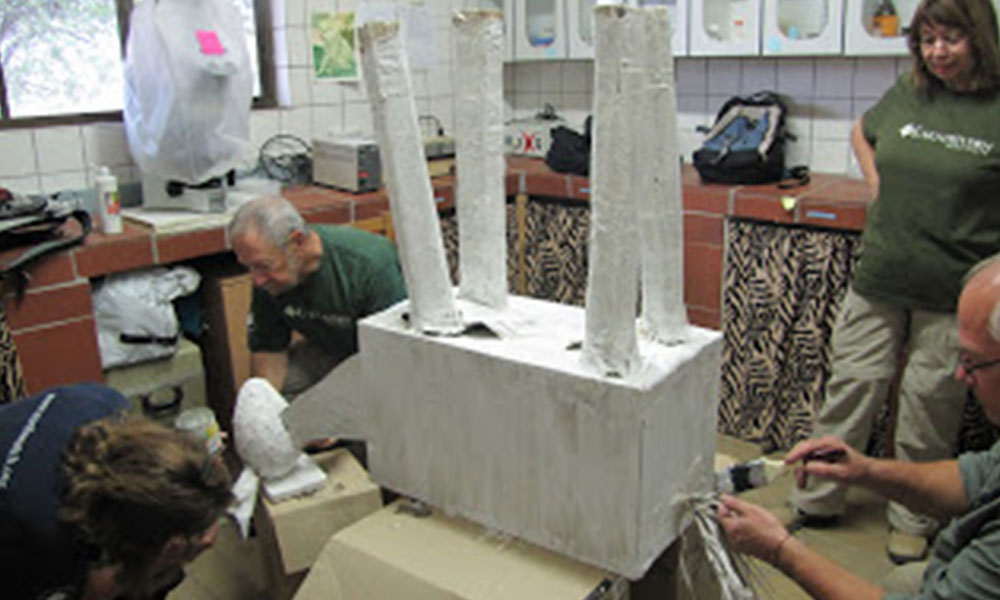 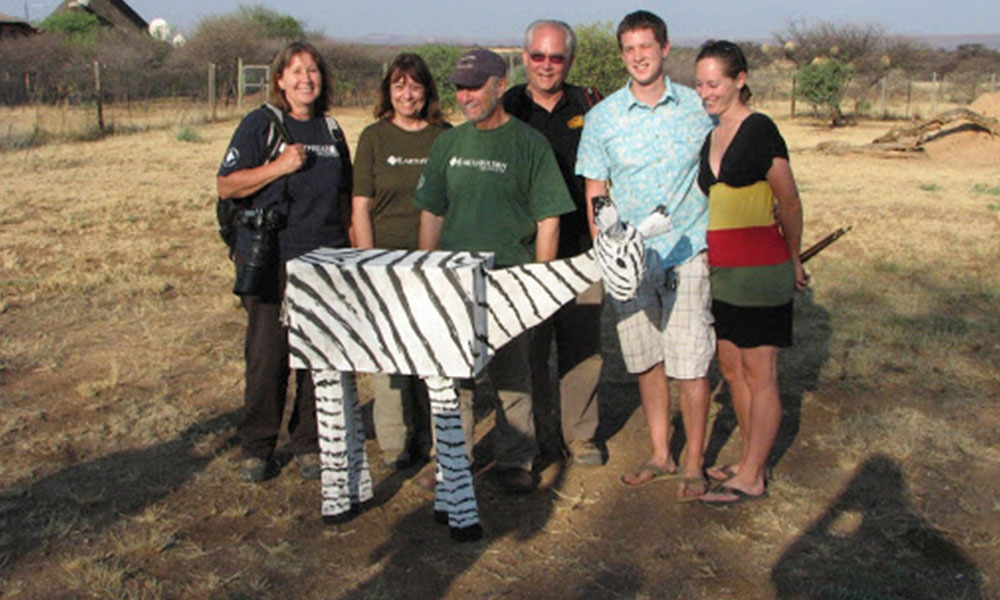 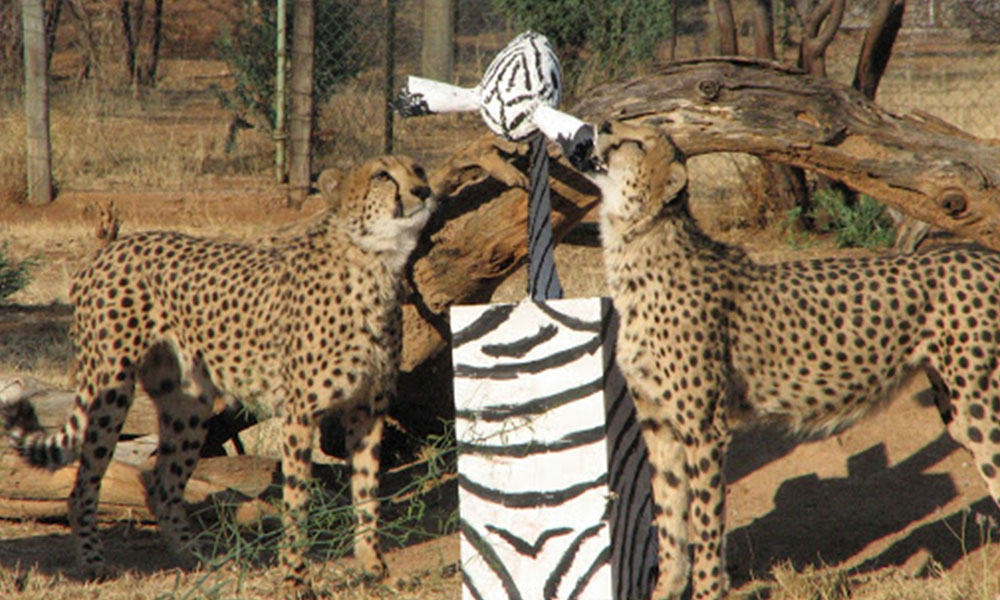 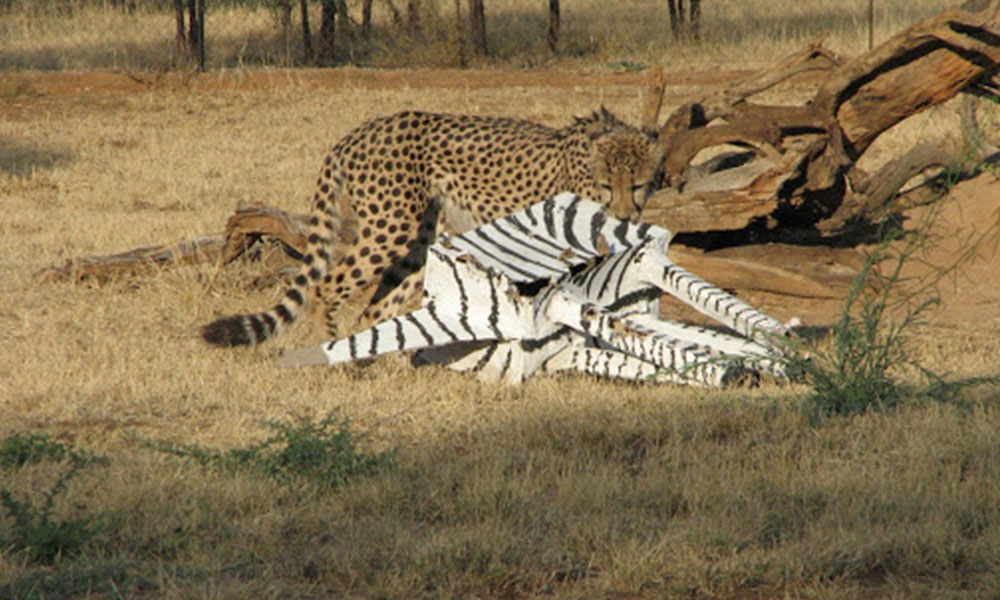