Ron and his sisters, Harry and Hermione, were brought to the Cheetah Conservation Fund in 2005 after losing their mother when they were about two months old. Named after the popular characters from the Harry Potter book series, they were always a very popular group with visitors, especially with young children. Though he weighed approximately 45 kilograms, Ron was quite small and dainty compared to most of our other male cheetahs. People would often guess that he was much younger than he was because of his smaller size and were always very surprised when we would reveal that he was one of our oldest resident cheetahs.

Much like his sisters, Ron tolerated people, but was not as comfortable as some of our other cheetahs. He very much loved his routine, especially around feeding time. He would always sit and wait very patiently for his food, while the other males in his coalition would get extremely excited, running around and vocalizing. He was always very patient with us, even if we did get the occasional glare from him if lunch was late. Other than feeding time, he liked to be as far away from the keepers as possible. He loved to find a nice shady tree to lay under for an afternoon nap, making him hard to spot in the tall grass unless he swished his tail or picked up his head to look around. As he got older, and he moved to a smaller enclosure, he had his keepers very well trained to bring his bowl of food directly to him without him having to move a muscle. We always indulged him – he deserved it being nearly 17 years old.

One of my favourite memories of Ron will always be watching him do the cheetah runs on our mechanical lure course. We would run him first, before the other males. He had a perfect routine. He would go and “hide” in plain sight in the exact same spot up by our motor that drives the lure. He would sit and wait. And wait. And wait. We could run the lure by him 5, 10, 15 times, and he still wouldn’t move. We could move it fast, slow, medium speeds past him, and he still wouldn’t move. He was like Goldilocks – waiting for it to be just right. Only then would he run. He was a great runner, but always demonstrated what cheetahs do best – short distance sprints. He sometimes would do a full lap, but typically only made it three-quarters of the way around our course before he started to slow down. As positive reinforcement for running, we would always let him catch the lure there. And if we were too slow walking over towards him with his treat, he would get up, let go of the lure, and walk over to us. He would sit a meter or two in front of us as if to say “I caught it, I would like my treat now please”. Always the perfect gentleman he would take his reward very nicely and gently off the spoon, then go and lay down under a tree to watch the other males run, typically not participating again. The run is always an optional activity for the cats, and Ron was a good opportunity for our tourism guides to talk to guests about how cheetahs are just like your domestic cats – they do what they want, when they want, end of story.

After losing his coalition mates – Shunga, N’Dunge and Little C over the past year, the decision was made to move Ron to a new enclosure next to Dr. Laurie and Dr. Bruce’s house, where he could get extra attention and care. We also moved his sister Hermione in with him, and while they mostly ignored each other and stayed in their separate spaces, I think they both felt relaxed knowing they had a sibling around.

In the wild, cheetahs will typically live between eight to ten years. With proper care, we can extend their lifespan in captivity, but unfortunately even the best medicine can’t reverse the effects of old age. Being nearly 17, Ron was one of our oldest captive cheetahs to ever reside at CCF. With regular blood tests, subcutaneous fluids to keep him hydrated, and a special diet of chicken along with chopped meat, we were able to help him live comfortably for quite a while. But as he slowly became less and less interested in food, lost weight, and stopped his daily walk around his enclosure, the keepers and veterinary team knew it was time to say goodbye. Ron was the last surviving member of the Hogwart’s trio, and we hope that he has now joined his sisters and his coalition mates on the other side of the rainbow bridge. He will be greatly missed by his keepers, and everyone whose life he touched in his many years at the Cheetah Conservation Fund. 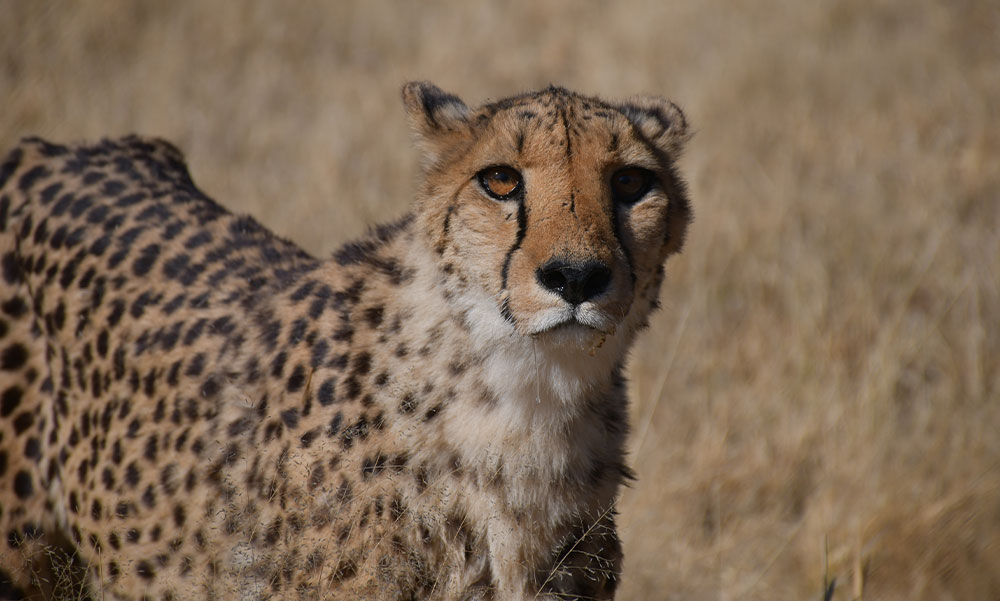 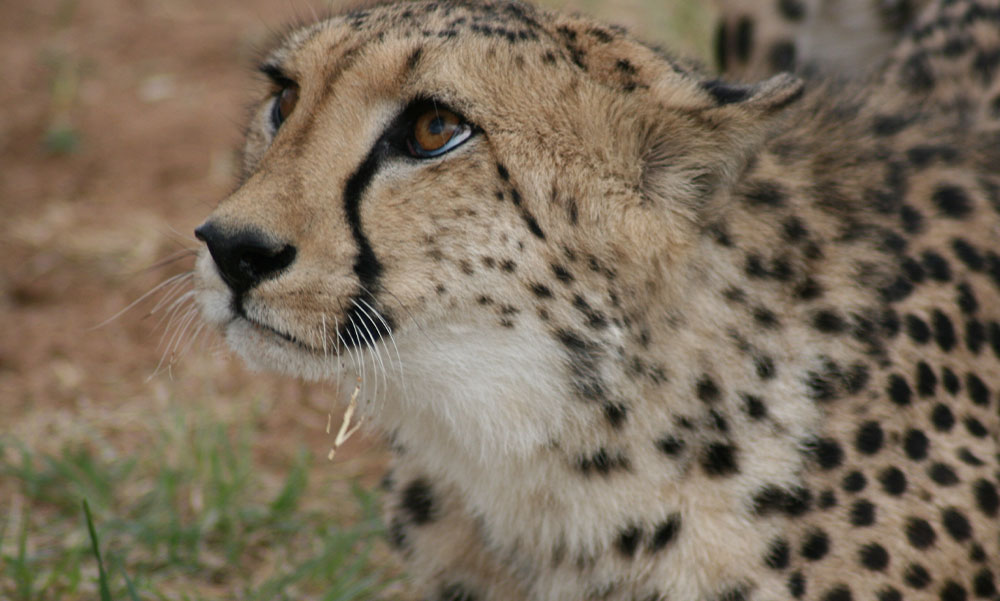 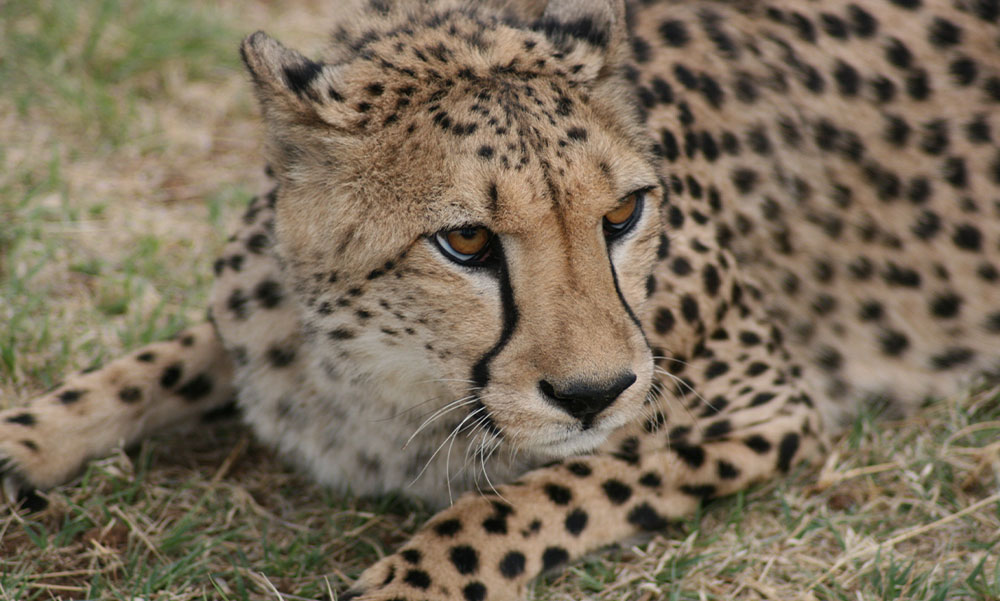 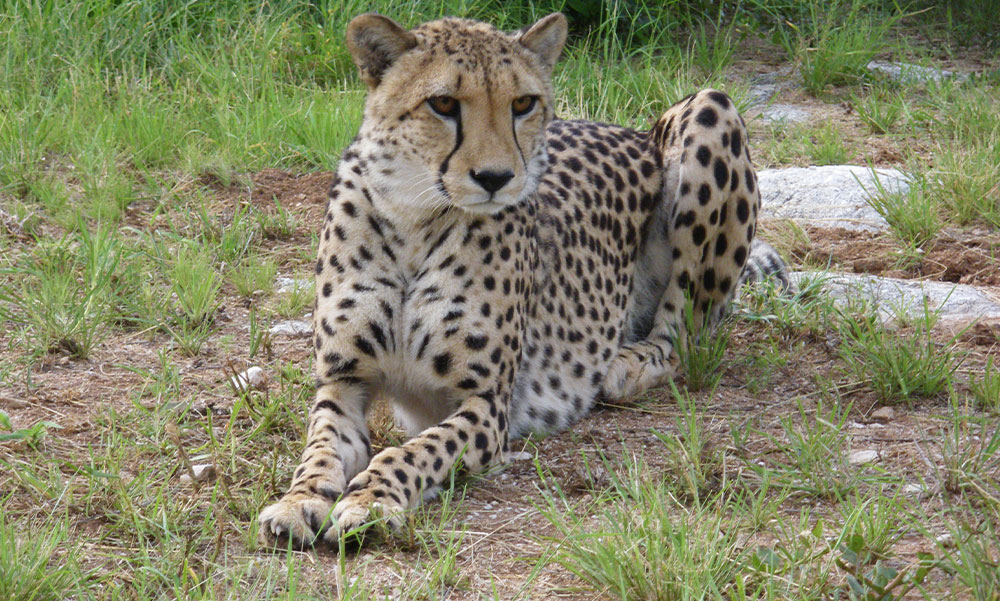 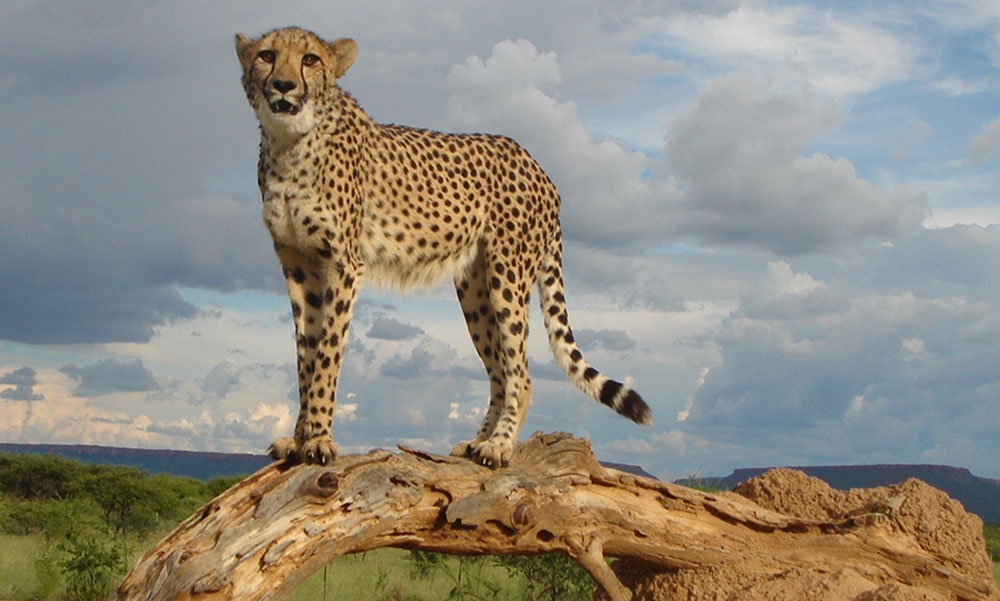 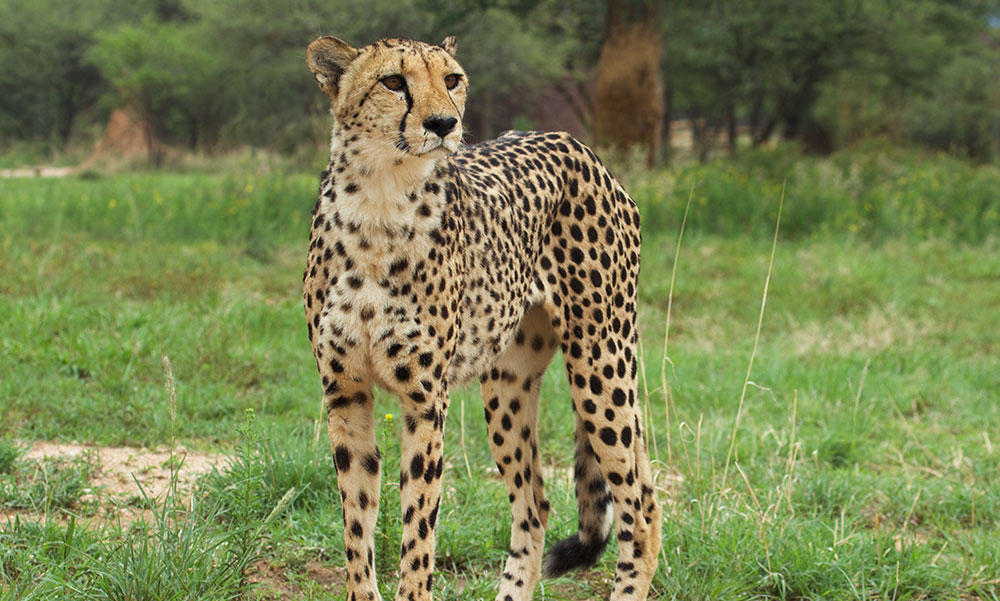 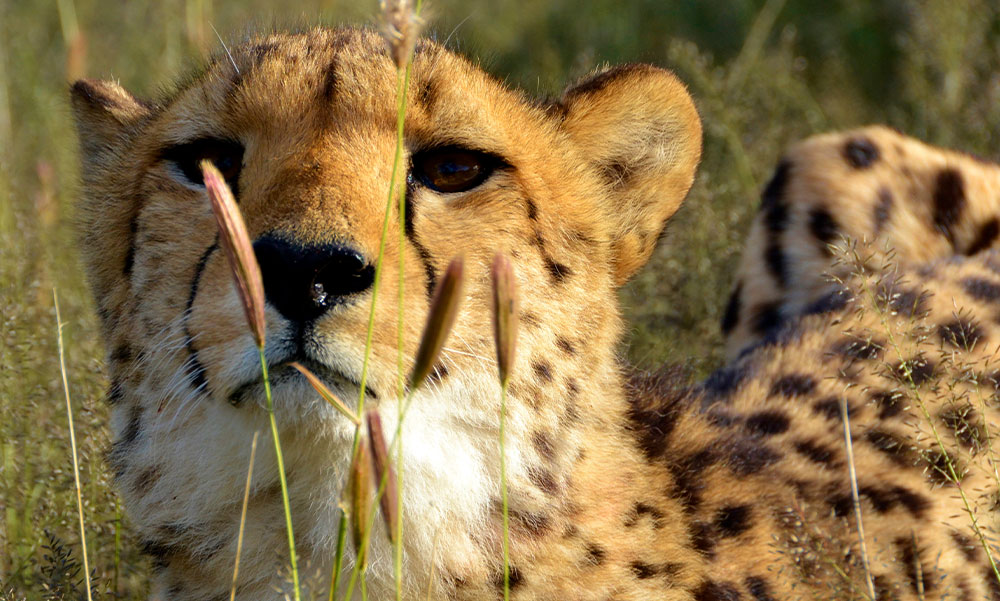 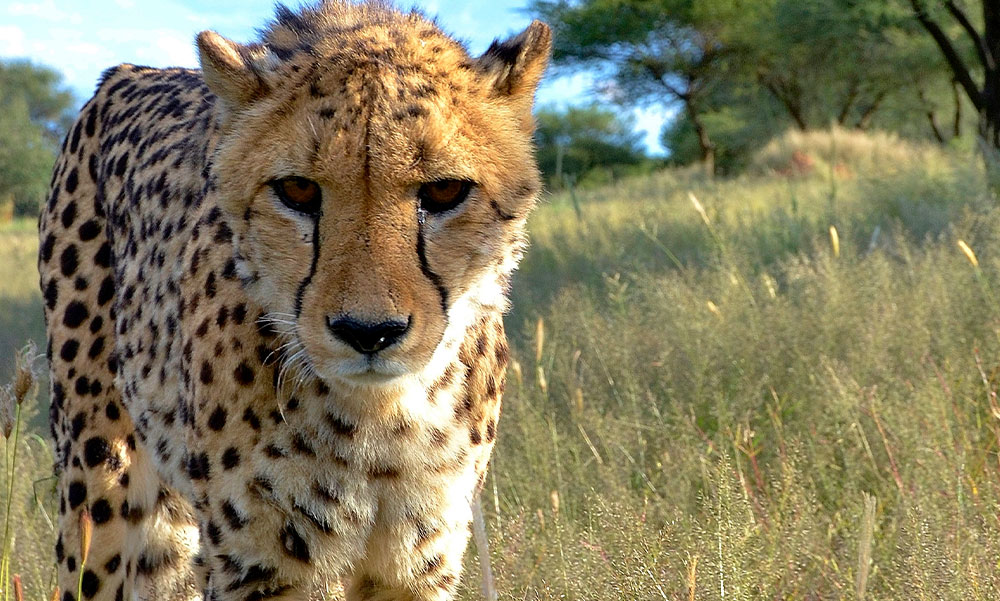 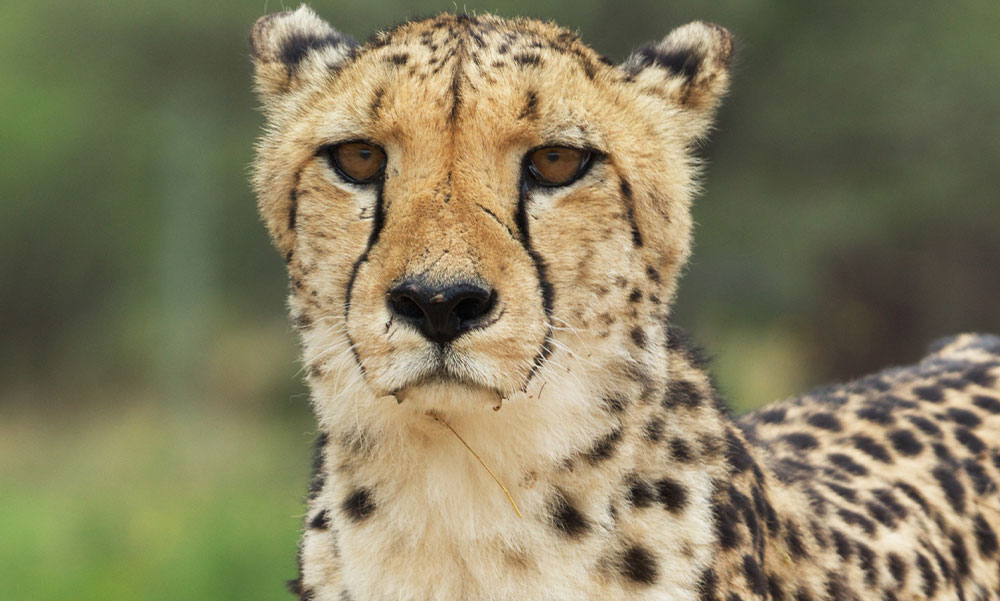 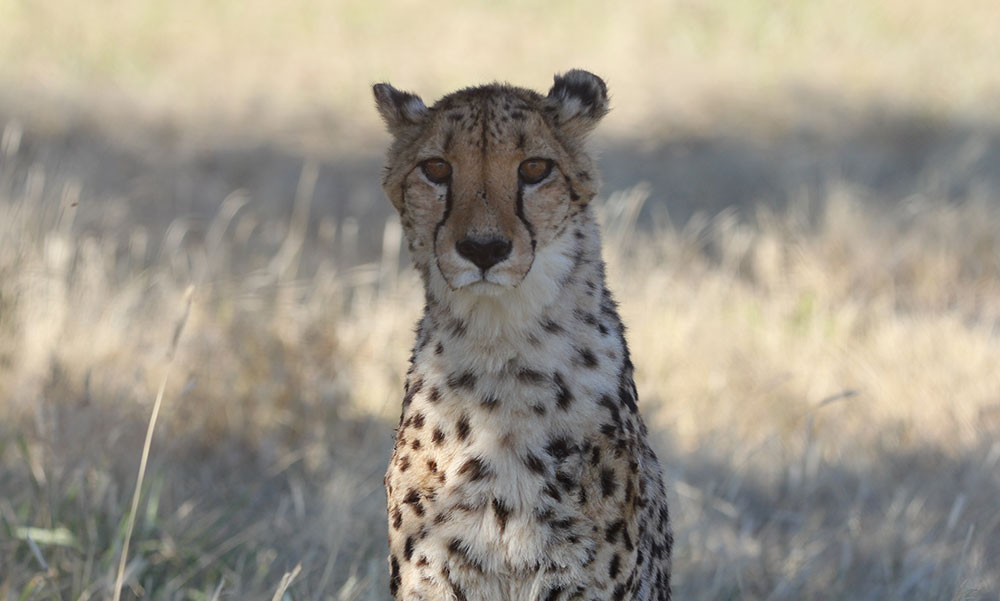 Khayjay along with his brother Peter, and sisters Tigerlily and Senay, came to the Cheetah Conservation Fund in 2010 when they were approximately three and a half weeks old. CCF was called by the Ministry of the Environment, Forestry and Tourism (MEFT) to collect cubs they had confiscated in the Eastern Communal lands, near the town of Okakara. Their mother had been shot by the communal farmers after she was seen catching his livestock. Luckily the tiny cubs were brought to CCF right away, as they would not have survived for very long without their mother. Nicknamed the “OK Cubs” because they came from Okakarara, the four of them settled in quickly to their new life at CCF. Under the watchful eye of Dr. Laurie Marker, Dr. Bruce Brewer, and a team of keepers, they thrived and grew quickly. Each of the cubs had consistent keepers who cared for them and Khayjay’s favorite and constant for nearly his whole life was Eli Walker.

Although they were littermates, each sibling developed their own personality and quirks as they got older. Khayjay was always shy and turned into the “follower” of the group. When called in for feeding or moved through the feeding camps for the cheetah run, Khayjay was always one of the last, following behind his siblings rather than leading. Trying to take a nice group shot was nearly impossible for the four of them. One cheetah would always be either facing entirely the wrong way or refuse to look at the camera. The majority of the time, it was Khayjay. He was also the favorite sibling of Tigerlily and his brother, Peter.

All four of the siblings were very fond of routine and didn’t like change (actually most animals don’t). When we would place their feeding bowls in a different feeding camp than normal, Khayjay would sit in his normal spot, staring at us and looking very confused. Often, he would wait until right before we put the food bowls down to decide that change wasn’t so scary, and he would try it for the day, if it meant he got his food! Meanwhile, the other cats would be impatiently waiting for their turn to come in for feeding. He had his keepers very well trained – especially at the cheetah runs. He would run a little bit – not very far and not very fast before flopping down onto the ground. But then when one of his siblings would catch the lure, he would immediately get up to come over to see if he could get an extra treat – sitting as close as he possibly could to the keepers and getting in the way. To get him to move out of the way, we would try every trick we knew, but often he would sneak in a treat or two before finally moving so we could continue with the run.

Even with his quirks, Khayjay was normally very laid back, and not a lot made him angry or upset. However, when new cubs arrived at CCF, and he was no longer considered the “baby”, it was a very sad day for him. The OK Cubs’ enclosure had always been close to Dr. Laurie and Dr. Bruce’s office which is also attached to the cub nursery area. Since they were hand raised from a very young age, they enjoyed the extra attention and got regular between meal treats.. As the new young cubs grew, the OK cats would losing one small part of their yard to the new cubs, and the cub yard expands as the cubs grow. Khayjay would sit at the gate leading down to the nursery yard and glare at the new cubs, or even stalk along the fence, trying to be big and tough, telling this new arrival to get off his turf. He eventually accepted that this intruder was not going anywhere, but it was the happiest day for him when any new cubs graduated to the bigger yards, and he got this small piece of ‘his’ space back. Until the next cub arrived, and it happened all over again.

Every single day, the cheetah keepers do a visual health check on every individual cheetah. The biggest thing we check apart from obvious physical problems, is their behaviour. Cheetahs are very much creatures of habit, and if they suddenly divert from routine behaviour, it can point to health problems. Luckily, we have a great full time veterinary staff on site at CCF and can address any health problems promptly. However, cheetahs are still wild animals, and are extremely good at hiding pain or sickness until it becomes extremely serious. Recently, Khayjay suddenly stopped eating and became quiet and lethargic. We knew something was wrong. The vet team X-rayed him which showed air buildup in his stomach and intestinal tract. We address this problem immediately, but Khayjay’s demeanor remained quiet, and he still didn’t have an appetite. Exploratory surgery was conducted a few days later which also didn’t reveal anything obviously wrong. Medications for the symptoms were given, but Khayjay got weaker. To try to assist his declining health, a blood transfusion was given to Khayjay using blood from his brother Peter to try and help Khayjay’s body recover from the mysterious illness.

Despite the best efforts of the veterinary and cheetah team, Khayjay knew it was time to go and passed away peacefully on his own. The necropsy revealed a large tumour hidden within his intestines that would not have shown up on x-rays or blood tests. The mystery may be solved, but it was unfortunately too late for Khayjay. It was a sudden loss for the team, and extremely sad, especially for Drs. Marker and Brewer and Eli Walker who had been with him since the very beginning. While Peter, Senay and Tigerlily have continued with their lives seemingly as normal, we have continued to give them extra care and support, as we all go through the grieving process together for their brother. Khayjay was an amazing cheetah to work with, and an amazing ambassador for his species. He will be greatly missed by everyone here at CCF and everyone whose life he touched in his time here. 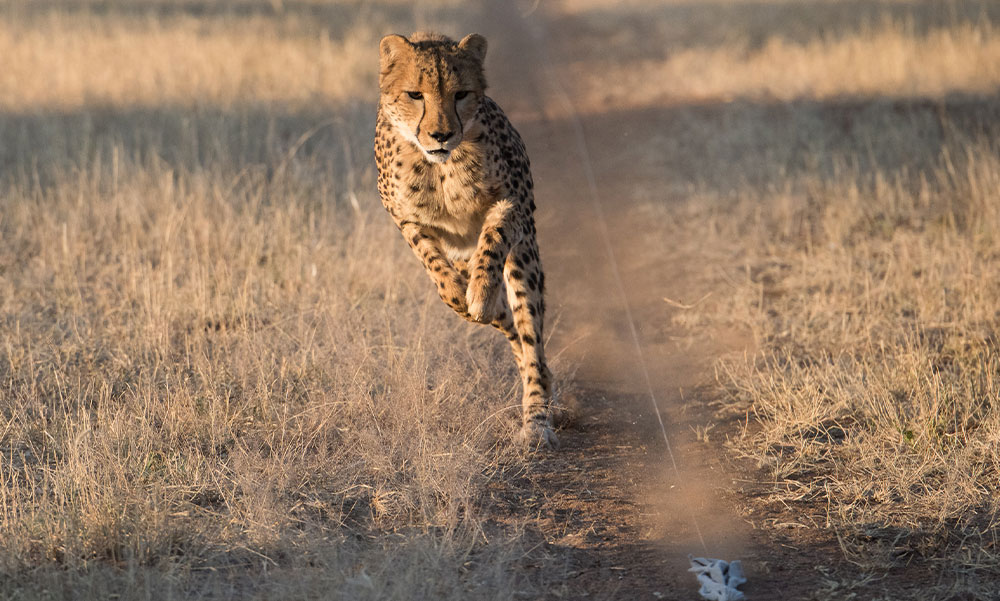 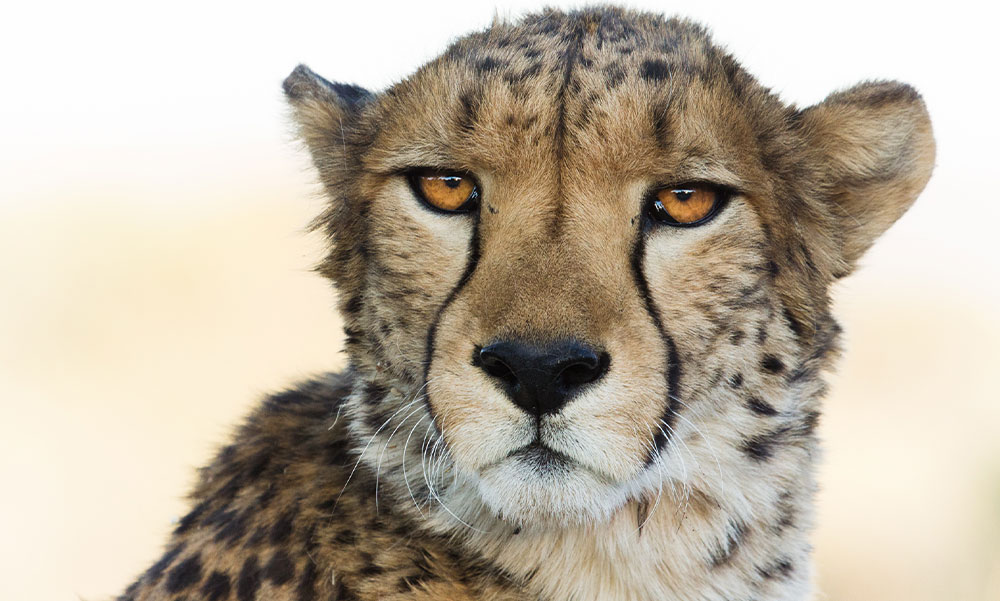 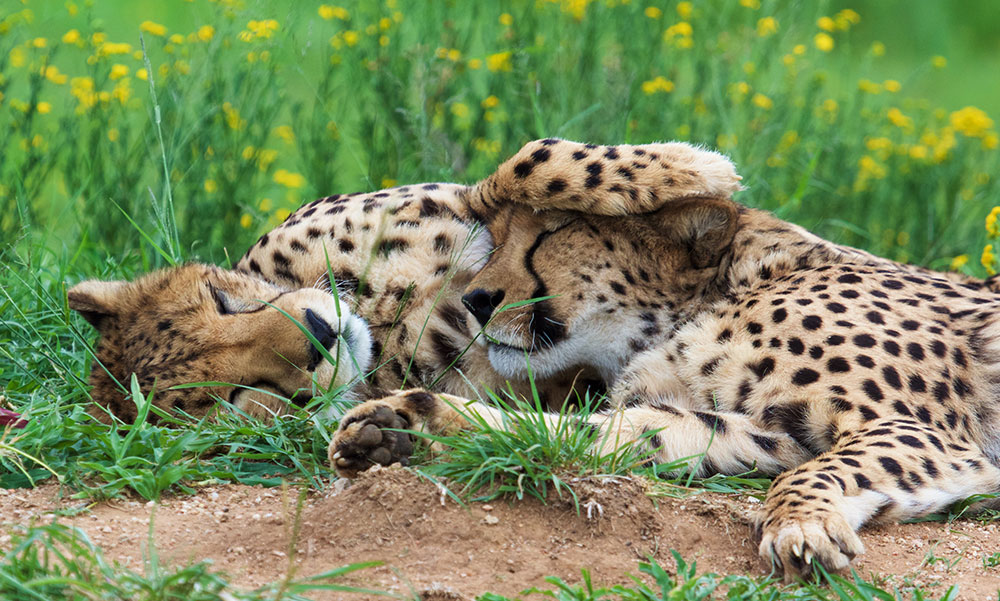 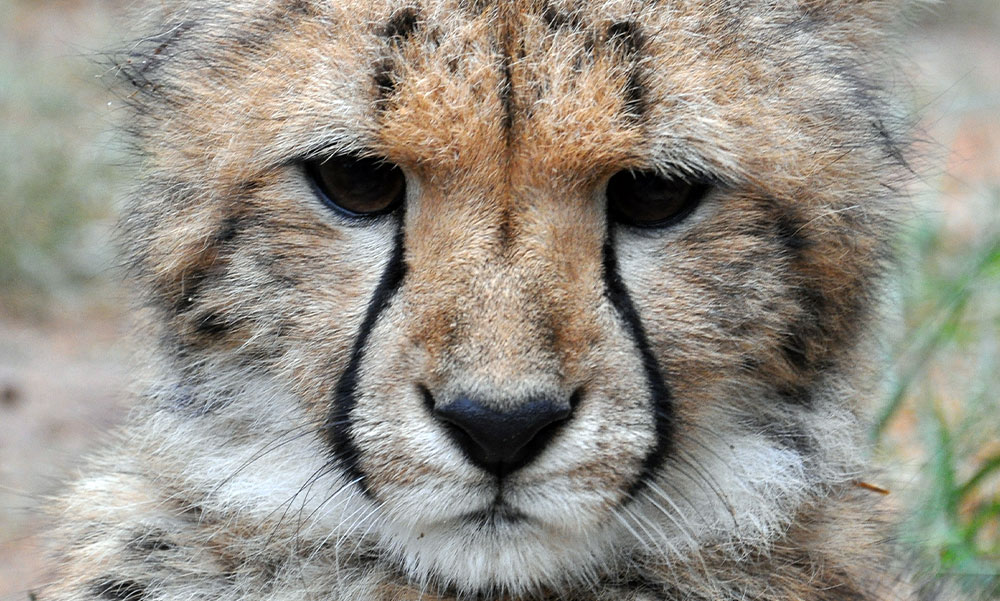 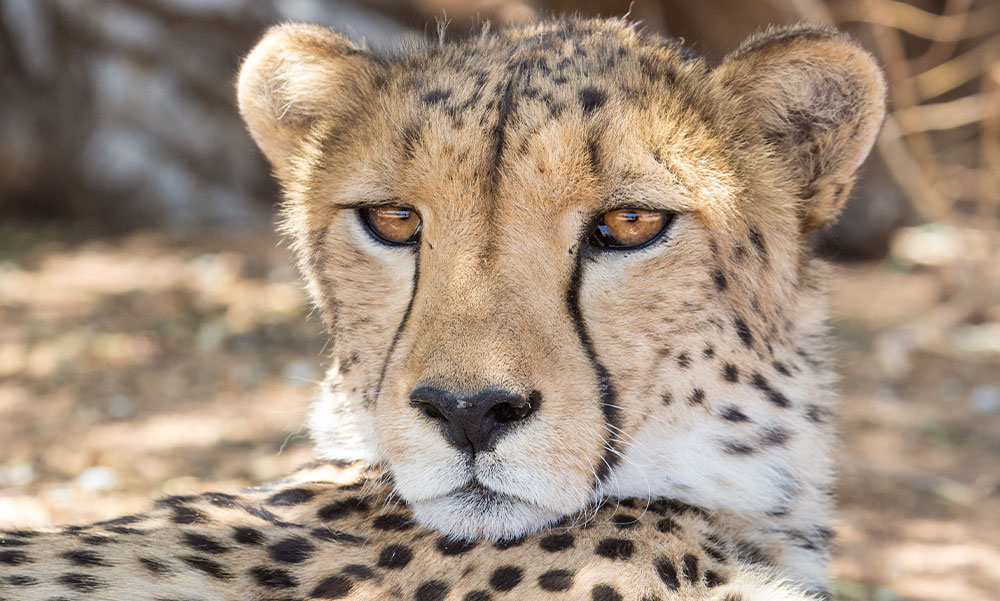 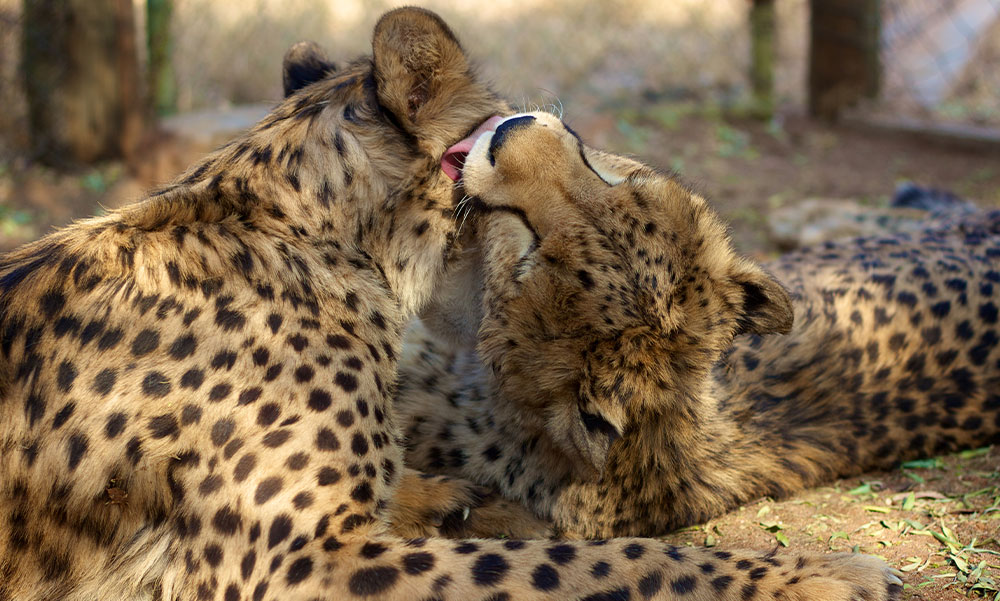 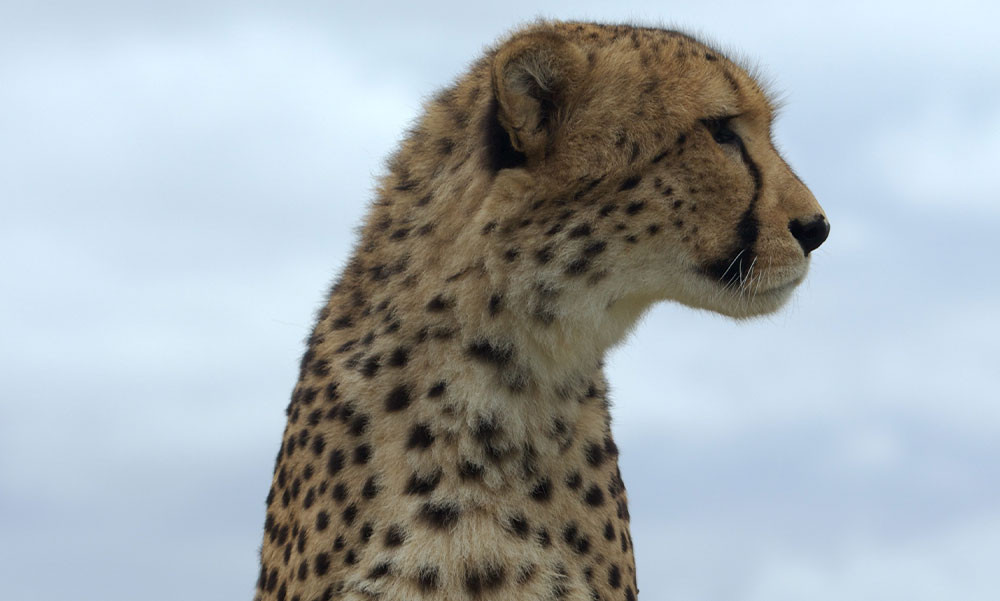 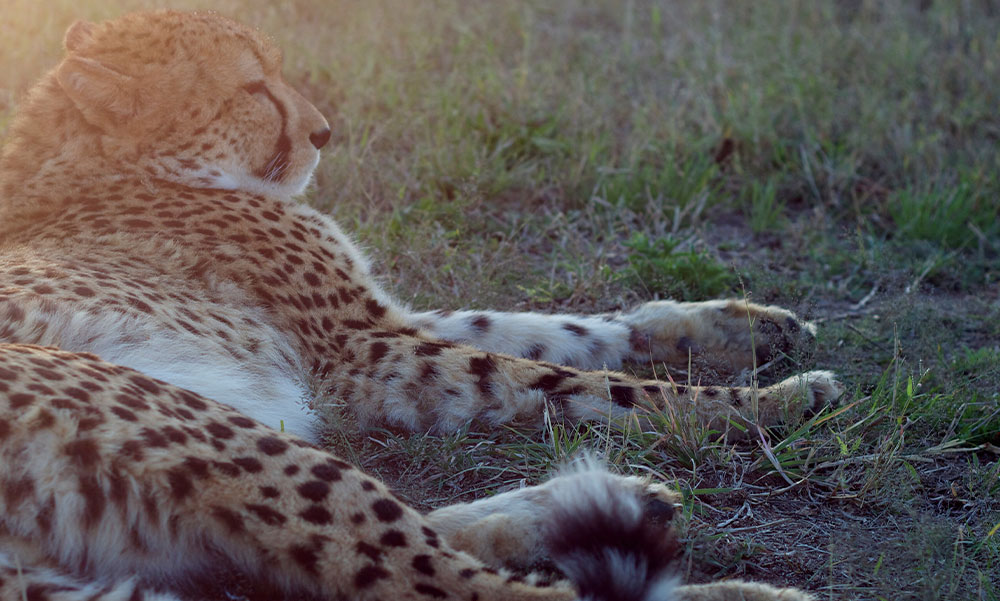 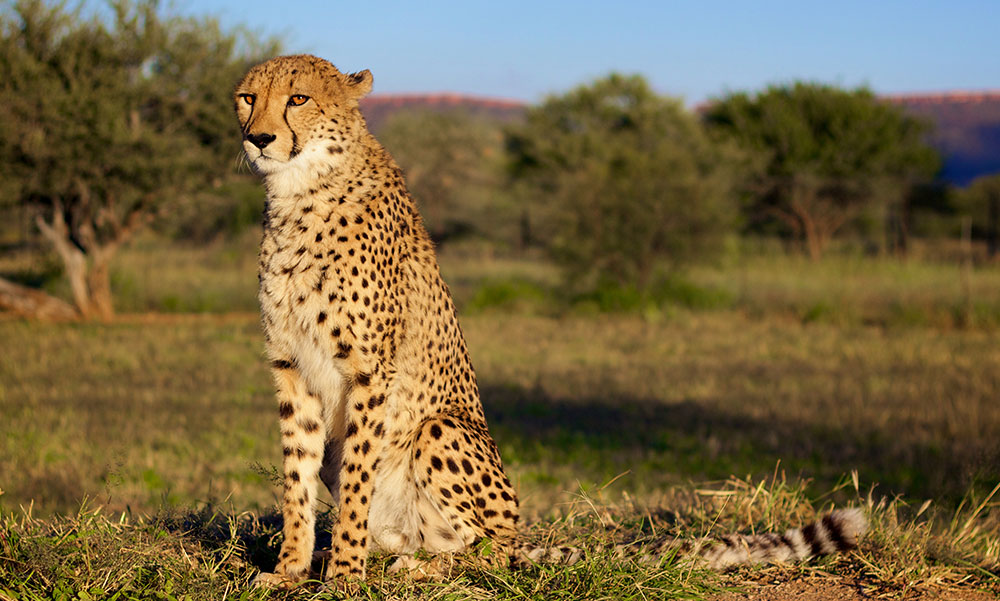 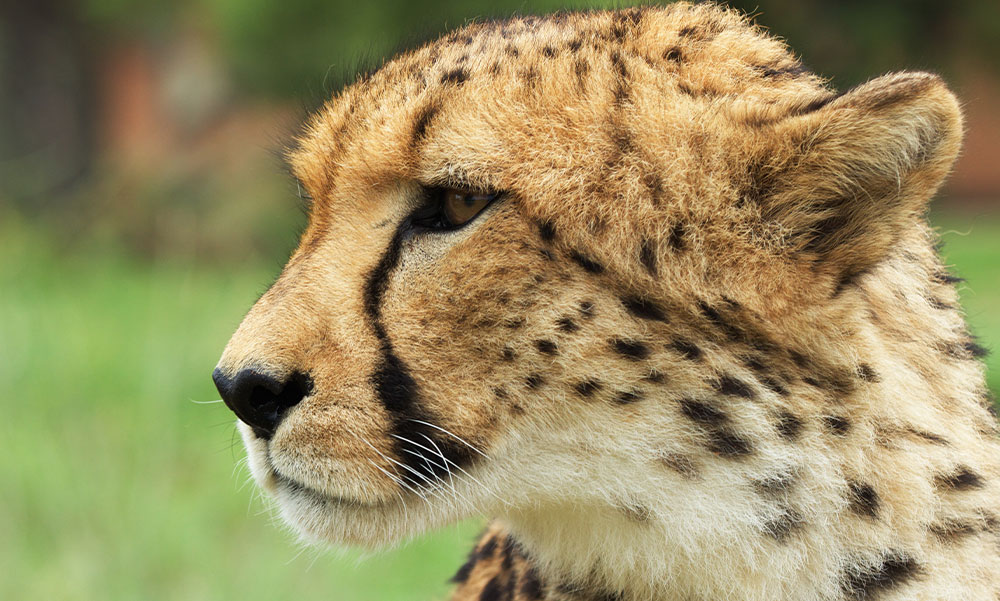