B2 arrived at the Cheetah Conservation Fund in 2014 when he was approximately six months old. Named after the B2 goldmine close to CCF, he was an extremely frightened young cub, and called endlessly for his mother the first few days. While Dr. Laurie Marker and Dr. Bruce Brewer tried their best to befriend him, he was extremely weary of people, and wouldn’t let them approach. Luckily, another adult male cheetah named Phoenix answered his calls, and the two became inseparable almost immediately. Normally, male cheetahs live in a coalition group with their brothers and are not friendly to other males. However, Phoenix had also been orphaned at a young age, and was extremely calm and confident. He took B2 under his wing and taught him that life at CCF wasn’t so bad. Even as he got older, B2 would always look to Phoenix for support and guidance, and the two were never far from each other.

Cheetahs are unique in that they are able to meow similar to a domestic house cat. However, because he called so much for his family as a young cub, B2’s meow was very unique. It sounded almost like a baby crocodile rather than a cat. It always made his keepers laugh when he tried to be a big, tough cheetah and scare us off, but a tiny little squeak would come out of his mouth rather than a more intimidating noise like a hiss. 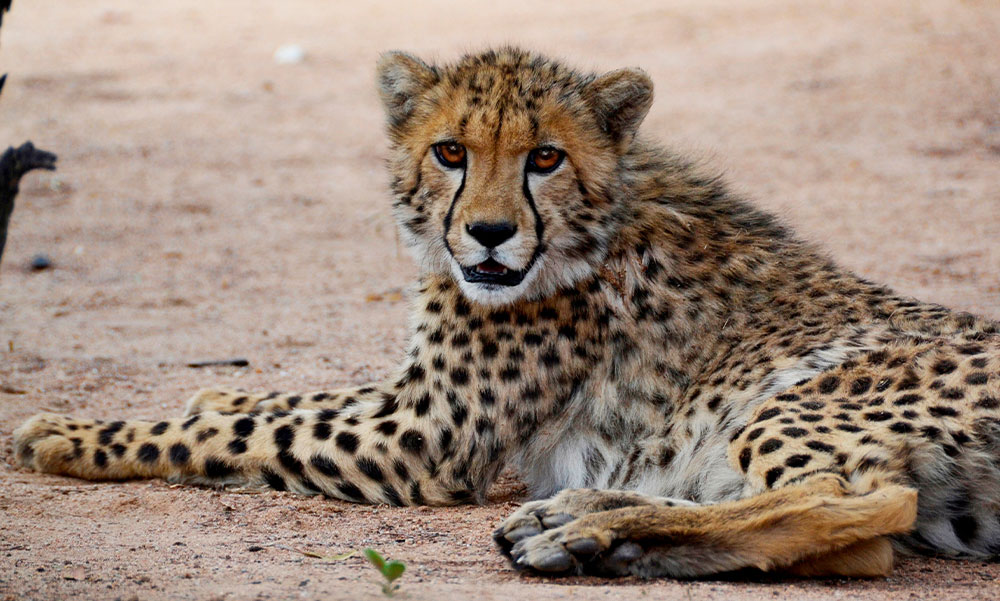 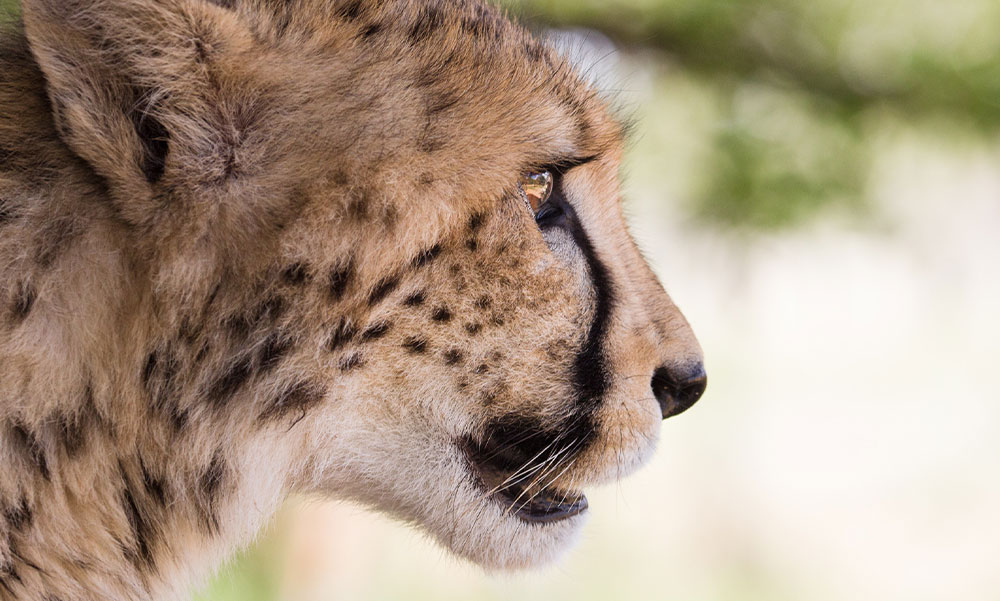 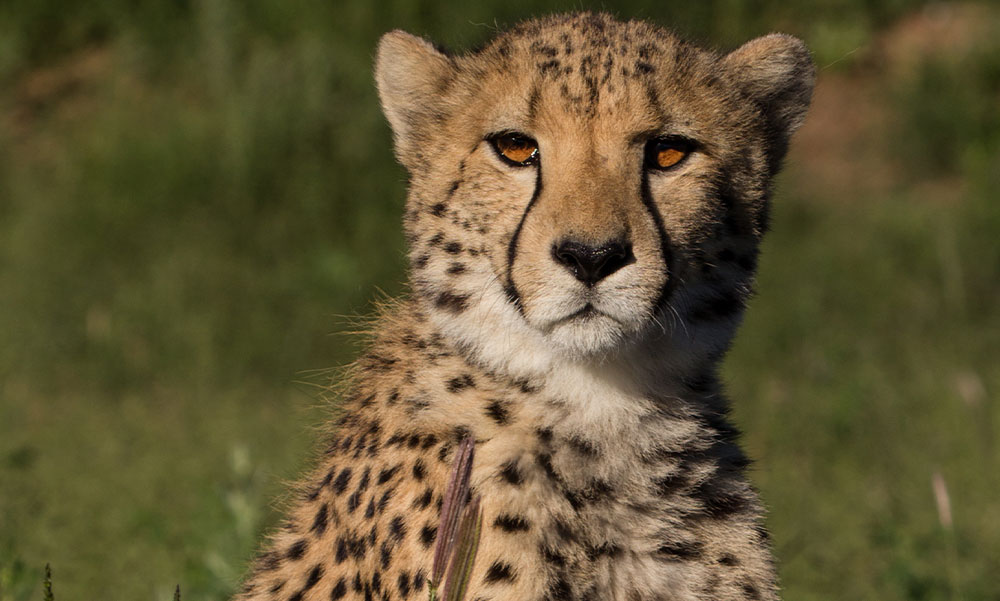 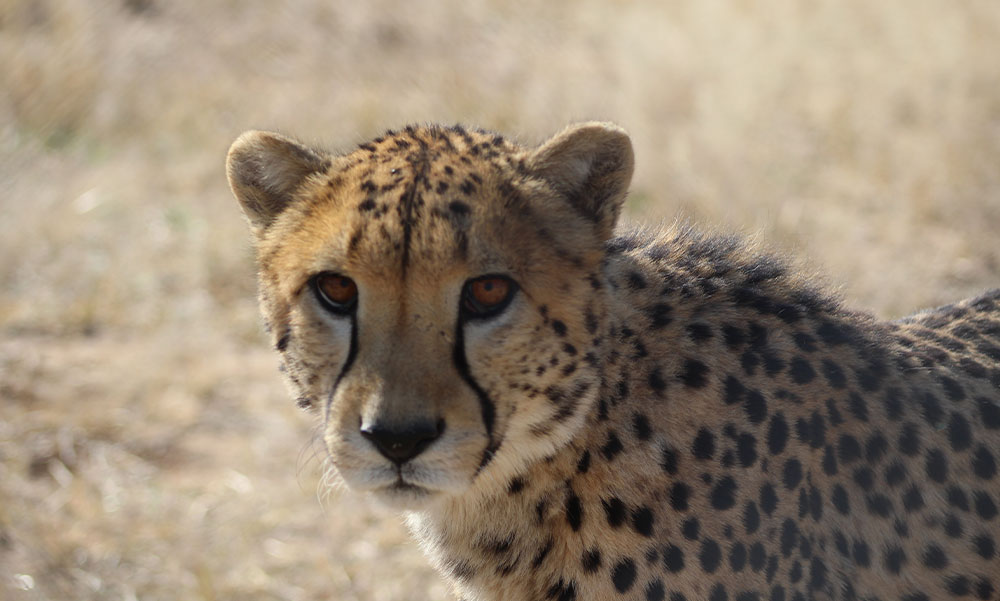 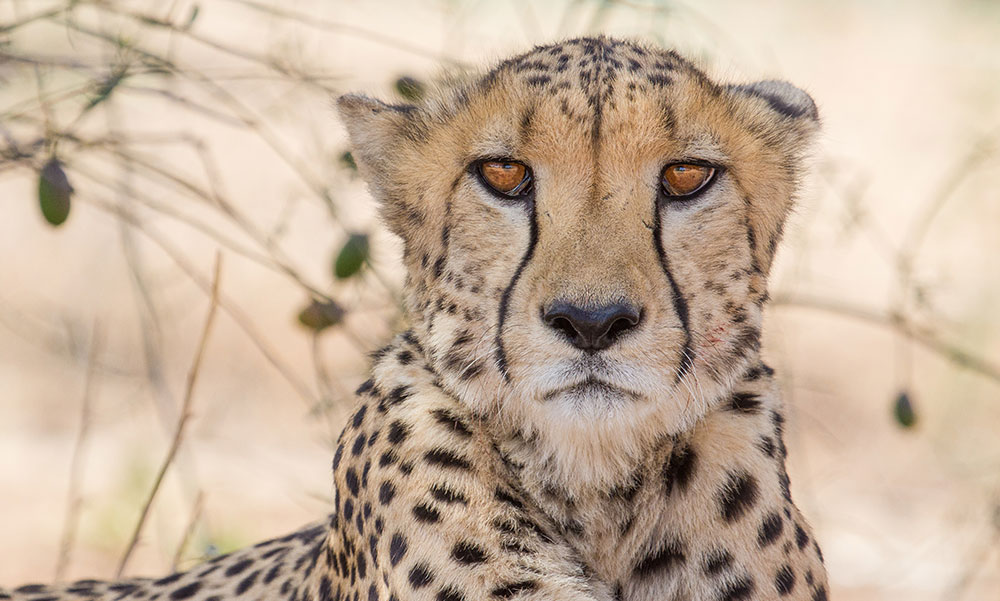 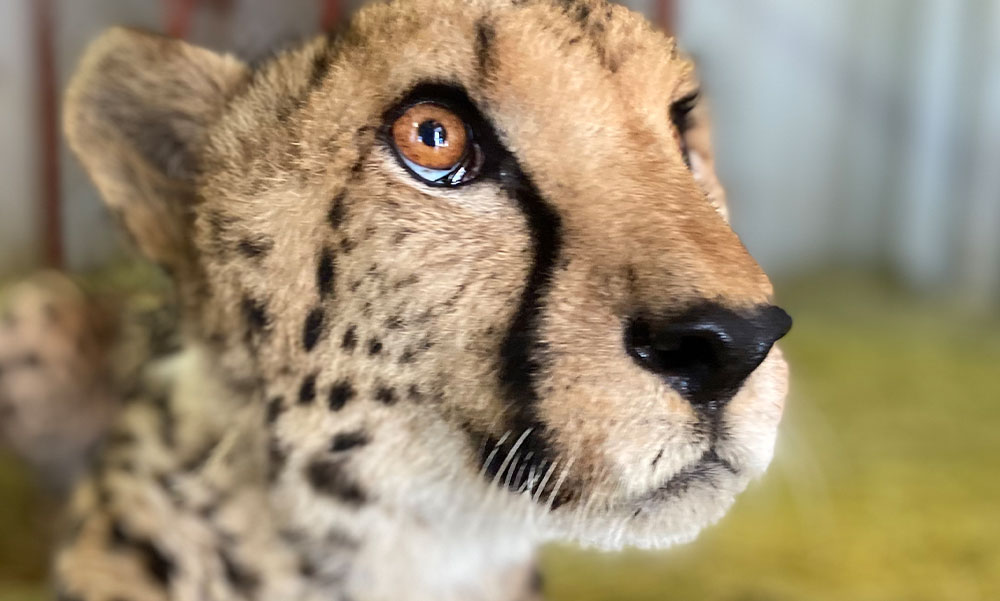 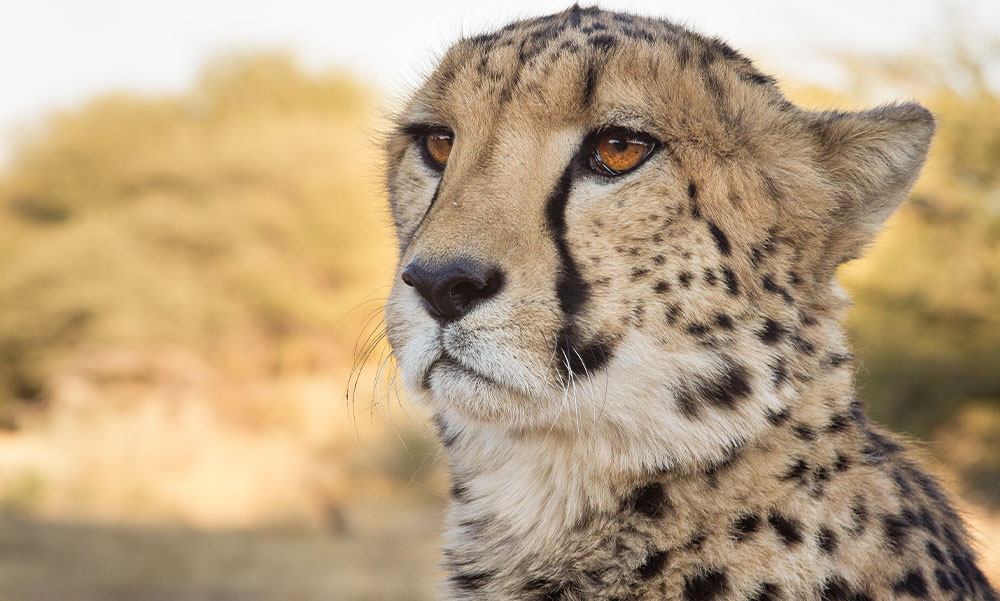 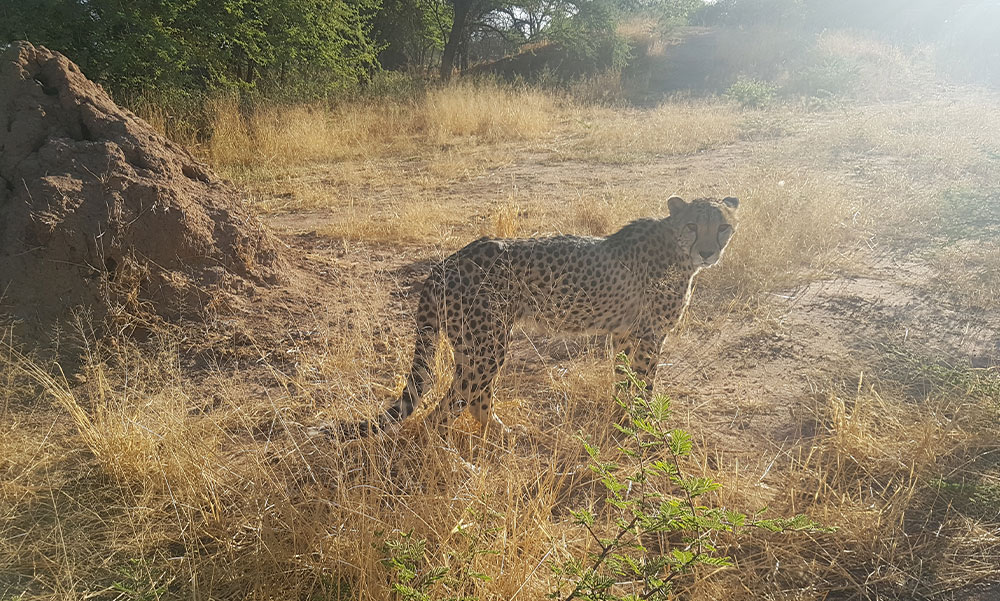 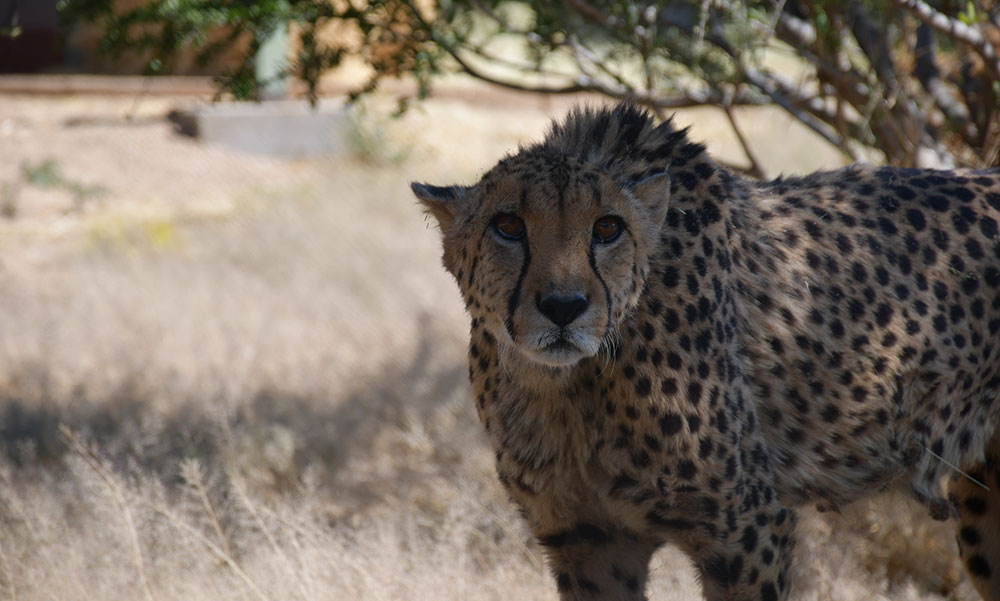 B2 always kept his distrust of people, and always liked to keep distance between himself and the keepers. But it helped that he was extremely food motivated and could be coaxed closer to the fence for things like health checks if needed. His food motivation also helped when it came to things like catch cage training. The catch cage is a smaller space that allows us to do procedures such as blood draws or vaccines while keeping the cheetah a bit more contained and still. Some cats are not a fan of the smaller more enclosed space. But B2 was extremely easy. As long as there was food involved, he was happy to sit still and eat his meal while the veterinary team or the cheetah team poked and prodded him. However, we were always in a race of who could finish first – us with our procedure, or him with his food. His teeth were still in very good condition, so an easy piece of meat he could finish in 10 minutes or less if he ate quickly. We always had to be prepared with extra food just in case, which he didn’t seem to mind.

While we consider cheetahs wild animals, we believe they are capable of showing emotion. When Phoenix passed away earlier in the year, B2 became a different cheetah. He would call out for his best friend constantly, walking around the enclosure day and night. His appetite was gone, and his once standoffish and sometimes aggressive behaviour towards his keepers became quiet and subdued. When he became sick with pneumonia earlier in the year, Dr. Laurie along with the veterinary and cheetah team had to fight hard to bring him back. While we were able to nurse him back to health, unfortunately his body took a hard hit. His liver and kidneys had started to shut down.

We were able to treat him with medication, which luckily he was very patient with. However, the disease eventually caught up to him, and there was nothing more that we could give to make him feel better. The decision was made to euthanize B2, so that he would no longer be in pain or suffer. While it was a devastating loss for the CCF team, it is made a bit easier thinking that he has gone to join his best friend Phoenix again on the other side. He will be greatly missed by everyone whose life he touched in his time here.