This year’s Spring Tour 2019 was very exciting beginning in New York City with the Explorers Club 115th Annual Dinner held at the NYC Marriott Marquis Times Square with many of my fellow Explorers and conservation friends. I had the privilege to be hosted by our cheetah friends Steve and Robyn Stong from Huntington Beach, CA with special guests David Dolan and Nancy Nenow. This year’s dinner was in celebration of Apollo 11 – 50th anniversary of the moon landing.

My tour lasted seven weeks traveling to 9 states and 17 cities with a special stop in Ottawa, Canada to visit our CCF Canada team and to give a talk at the Rideau Club hosted by Robert and Maria Peck. Robert Peck arranged a wonderful luncheon with friends to hear my lecture, “Cheetah Diplomacy: the race to save the world’s fastest cat” to a sold-out crowd.

Besides my lecture in Canada, I also gave 11 lectures throughout the US at various zoos and universities. I had the unique opportunity of speaking at Apple on April 4th on Cheetahs and Humans Sharing a Landscape. I spoke at the University of Arizona in Tucson as well as the Valley Charter School in Northridge, CA. While in Boston, I lectured at Tufts University for their Animal Matters Seminar Series after a quick stopover at the Franklin Zoo speaking at the Turtle Swamp Brewery on cheetah conservation in celebration of CCF’s 25th anniversary of the Livestock Guarding Dog program.

I was also invited to lecture at EarthX in Dallas, TX for their Earth Day conference again this year and interfaced with five conservationists in the Wildlife Recovery Panel for the Green Speaker Series at the Dallas Centennial Exhibit. I also gave a special EDTX Talk on Cheetahs in Illegal Trade.

In Los Angeles, CCF had a major Meetah Cheetah fundraiser at the Griffin Club hosted by CCF Trustee Adina Savin with cheetah ambassador cubs from San Diego Zoo Park. In Palm Springs, CCF Director Roswitha Smale hosted a wonderful cocktail and dinner party at her home with the introduction of Hasani, a new ambassador cheetah from Wild Wonders. With the added support of Chris Liebenberg from Piper & Heath Travel, we arranged a special trip to CCF Namibia for new travelers in 2020. I also had the opportunity to talk at the Living Desert Zoo for their spring 2019 Speaker’s Series before heading off to a lovely cocktail party and dinner hosted by CCF Canadian cheetah friends Jo-Anne Reynolds and Molly Woods. 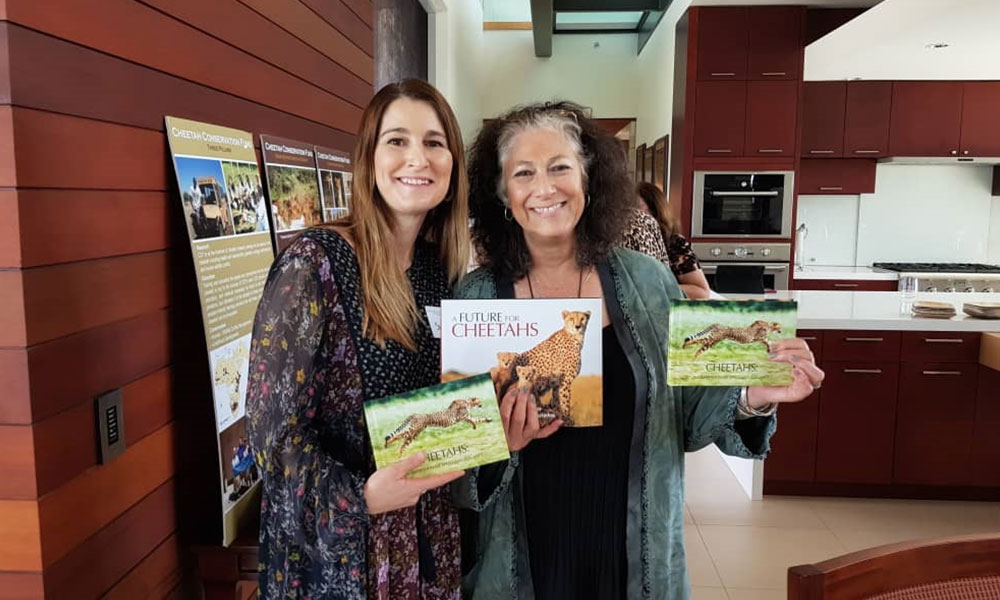 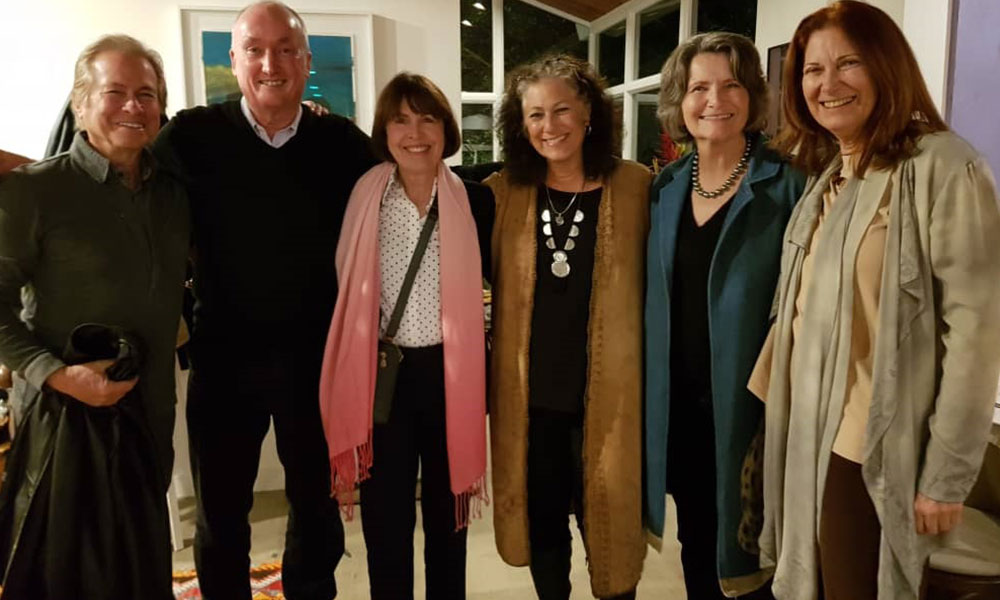 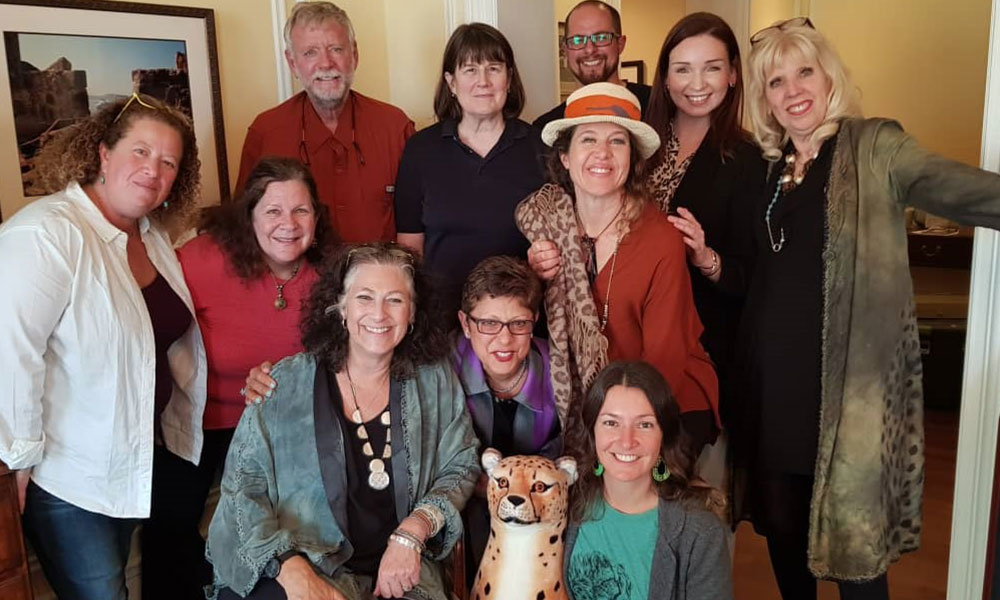 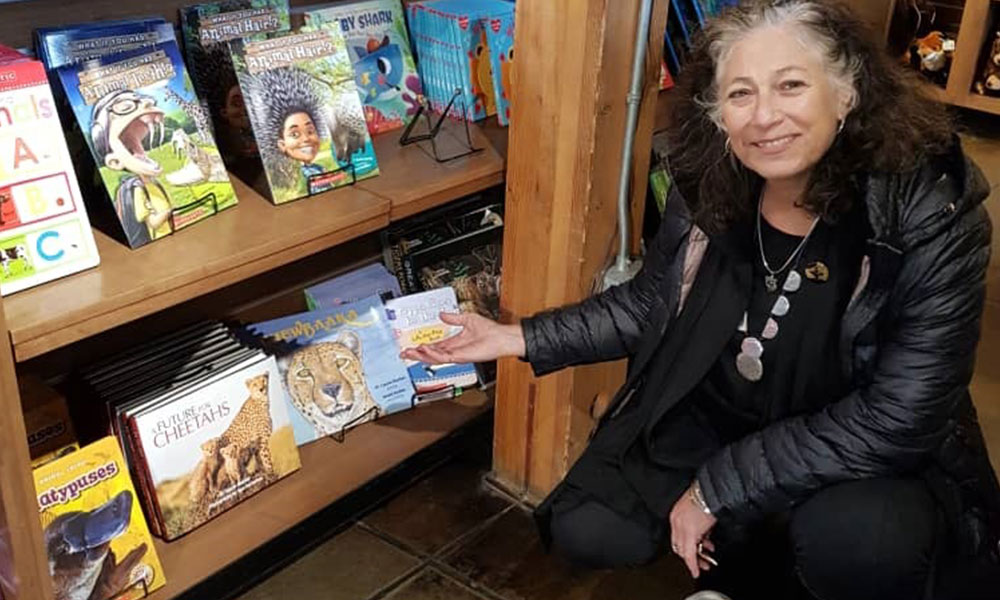 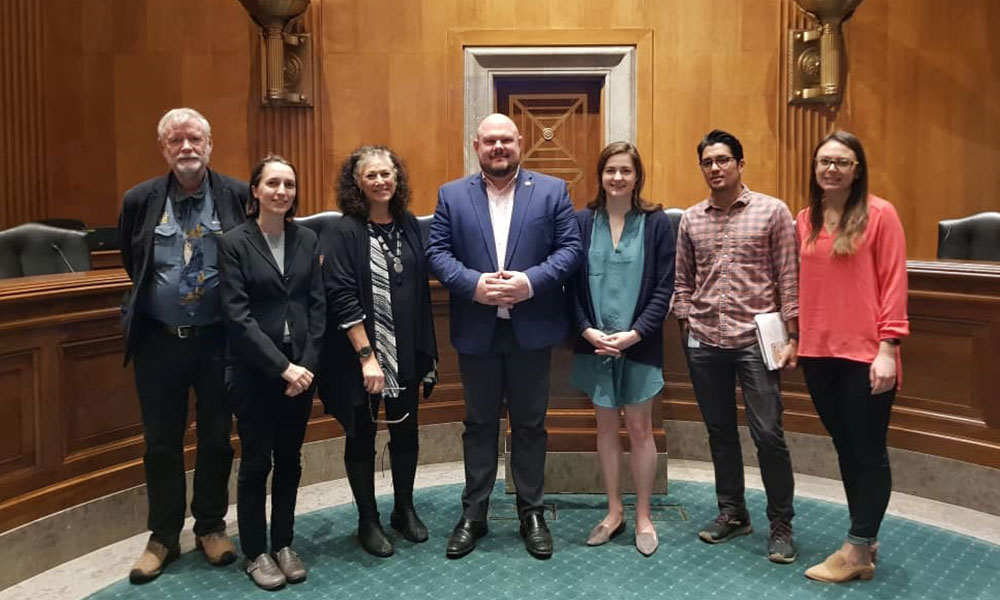 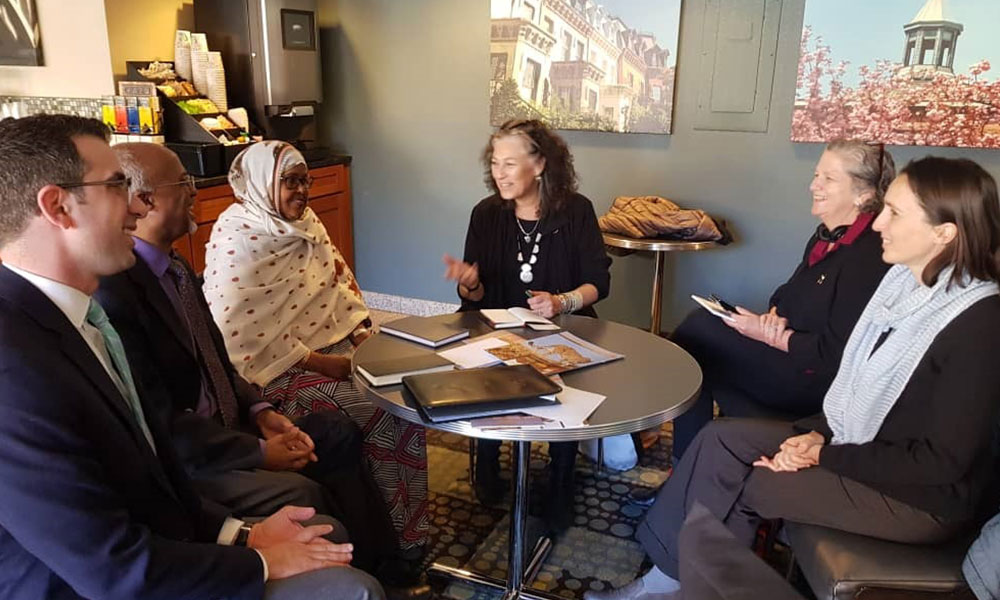 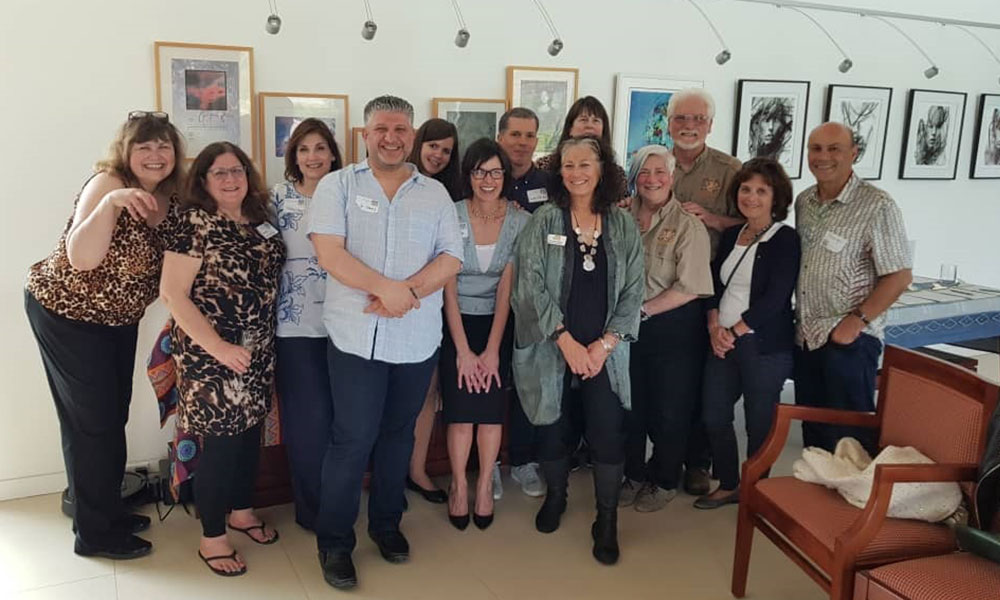 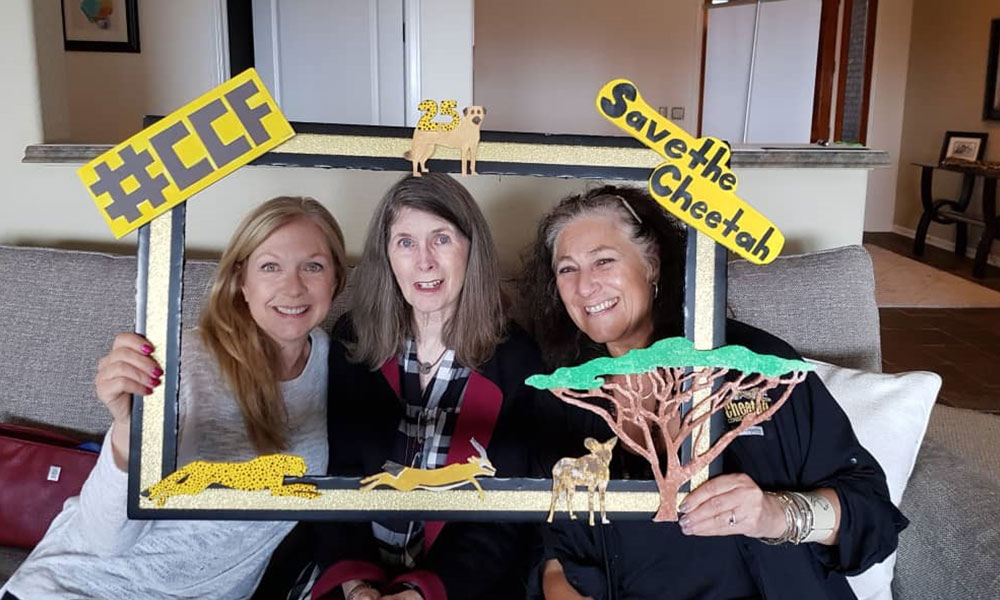 With my tour travels going for West Coast to East Coast, I stopped in many cities for events hosted by CCF Trustees along the way. In Tucson, I visited with CCF Trustees John Carver and Nina Gibson and had a special Dutch Dinner – Tasting & Tapas & Cheetahs with my Arizona friends. In Denver, Laura Nachbur and family had a private Wine & Cheetah with cheetah friends before my lecture at the Denver Zoo in celebration of CCF’s 25th anniversary of the Livestock Guarding Dog program. In Washington, DC, CCF Trustees Mary Josie Blanchard, Angela Weisskopf and CCF Director Sally Davidson, co-hosted Cocktails for Cheetahs at the Blanchard’s home to a full crowd of cheetah friends. It was a lovely evening to highlight the work in Namibia to our supporters in the DC, VA area.

This year I had the pleasure of traveling with Dr. Bruce Brewer, CCF General Manager, for part of my spring tour in April as we spent a week at Cornell University for my A.D. White Professorship internship which consisted of major meetings and lectures with the Vet School professors and students. From Ithaca, we traveled to New York City to be supported by the Bronx Zoo and the CCF New York Chapter in a special cheetah encounter fundraiser co-hosted by CCF Trustee Kathleen LaMattina, for an evening called Cheetah in the Spotlight: A View at the Bronx Zoo. It was a great success and wonderful to share the mission of CCF and our work in Namibia.

I also enjoyed attending many smaller fundraising events around the country to support the cheetah with a dinner in Brentwood, CA with my cheetah friends, Leslie Johnson and Shari Leinwand and CCF Director Sara Nichols. In San Diego, we had a lovely dinner hosted by Dr. Timothy Radke and his wife Judy who are planning to come to Namibia this year. All in all, throughout the US and Canada I had over 15 private lunches and dinners to support CCF as well as a total of 28 events. It was great to visit with everyone and to give my highlights on what CCF is doing this 2019 and to give them additional understanding of the plight of the cheetah and how they can contribute to our many programs and needs for the cheetah.

On behalf of everyone at CCF, thank you for joining me and hosting me this special spring tour in honor of the Livestock Guarding Dog program’s 25th anniversary! CCF fundraisers both great and small are made possible through the dedication of our Board, Trustees and Staff as well as the local CCF Chapters and volunteers at the various zoo facilities who support us through their ambassador cheetah programs. Entertaining on a smaller scale with intimate parties is a perfect way for me to personally thank our special donors and cheetah friends while traveling the USA. If you are interested in hosting and supporting me during my fundraising tours, please contact, Paula Martin at paulam@cheetah.org.