The special family photo above is a direct result of Cheetah Conservation Fund’s efforts to rehabilitate and release injured and orphaned cheetahs back into the wild. The image, taken at the time when countries around the world began to go into lockdown due to COVID-19, perfectly illustrates the success of our programs.

Cheetahs, like most other threatened and endangered species, suffer from many negative human-caused ecological impacts like habitat fragmentation, habitat loss, and human-wildlife conflict. Since cheetahs mostly live outside protected areas – alongside humans and their livestock – CCF’s research, education and conservation programs are focused on saving the cheetah and its ecosystem by helping people better manage their resources.

From now until August 31st, you can make twice the impact toward our programs. During Chewbaaka’s Wild Cheetah Challenge, a group of dedicated donors are doubling your contributions up to $225,000. 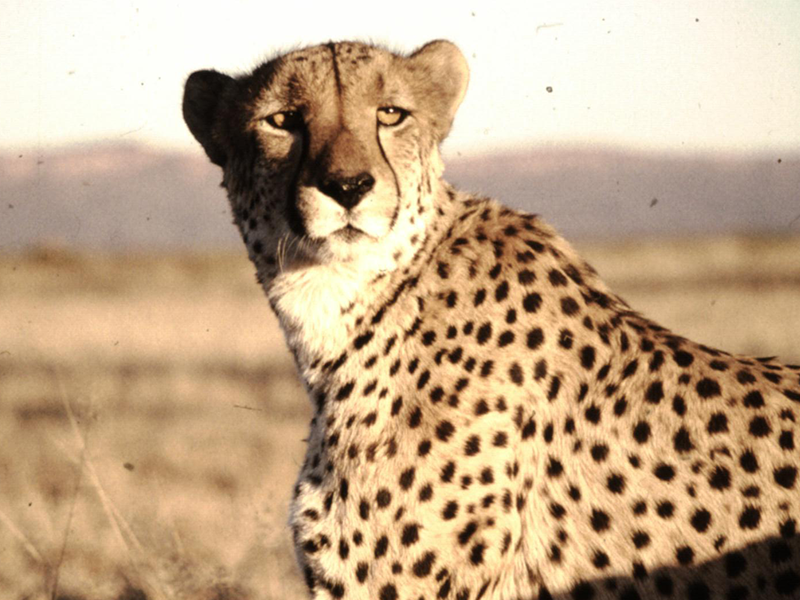 Chewbaaka, played a big part in CCF’s rewilding program by helping farmers understand more about how special cheetahs are and that their survival is in the farmer’s hands. He brought a calming presence to the Namibian farmers he met when they visited CCF. During Chewbaaka’s 16 years, he met thousands of farmers and school learners.

Without farmer support, CCF wouldn’t be able to release cheetahs back into the wild. By helping people live alongside predators CCF is helping save the cheetah and its ecosystem.

Savanna, the adult cheetah pictured below, was born to a CCF cheetah named Jacomina in 2014 in Erindi Private Game Reserve. Jacomina was rescued by CCF as an orphaned cub in 2007. After a long period at CCF’s Centre, Jacomina and her two sisters had the opportunity to return to the wild. Jacomina was first released onto CCF’s property but was later translocated to Erindi for release there. At Erindi, Jacomina gave birth to two cubs – Savanna and Shandy. With support from CCF and Erindi, Jacomina managed to raise both these cubs to adulthood. Now as an adult, Savanna has managed to successfully raise cubs of her own at Erindi.

Earlier this year, Savanna’s previous litter of two males, Oban and Talisker, achieved independence and ventured off into Erindi on their own. Savanna did not waste any time giving birth to a new litter only a couple months later.

Jacomina and Savanna are two of CCF’s greatest success stories. Returning orphaned, rehabilitated cheetahs back to the wild is no simple task. Regardless of how well we try to prepare release candidates, the risks are always high. The ultimate sign of success in any rehabilitation and release effort is reproduction in the wild.

Savanna’s cubs represent the second litter of second-generation cheetahs born to a rehabilitated and released CCF cheetah. Jacomina’s legacy seems secure with the success of her daughter Savanna.

Erindi is also home to three other CCF rehabilitated female cheetahs, Daenerys, Georgia, and Tatjana. Tatjana (in the banner at the top of the page) and Georgia also now have cubs of their own. They seem to be following in Jacomina’s footsteps. Over the next few months we will be watching, observing, and learning from these new mothers.

CCF has demonstrated the highest level of recorded success rehabilitating and releasing orphaned, captive-raised cheetahs. We can always do better. Our partnership with Erindi has been instrumental and together we are collecting important information to inform CCF’s research. With greater understanding we can improve the protocols and methodologies of rewilding and help range wide conservation organizations to save the species.

Please donate during Chewbaaka’s Wild Cheetah Challenge. Your donations allow us to do the work to rehabilitate and release cheetahs like Jacomina back into the wild and help keep cheetah cubs like Savanna’s living free and wild. We hope their stories and photos were uplifting to you.