In 1994, I embarked on an experiment to determine if livestock guarding dogs – the same kind used in Turkey for 5,000 years — could be effective in reducing predation losses for small stock farmers in Namibia. Today, some 25 years and 650 livestock guarding dogs later, our program celebrates its landmark silver anniversary, and Cheetah Conservation Fund Livestock Guarding Dogs (CCF LGDs) have gained an international reputation as the world’s best protectors of Namibian goats and sheep!

Known for their imposing physical presence, fierce bark, and loyal, protective nature, our livestock guarding dogs function as a buffer between small stock like goats and sheep and wildlife sharing farmland habitat. They deter most would-be predators with their presence alone, alleviating pressure on farmers to trap or shoot predators on sight. In Namibia, they are credited with saving hundreds of cheetah and other predator lives.

Before our dogs, farmers were removing 700-800 cheetah a year from the Namibian landscape. They regarded cheetah as pests that have a severe negative impact on livestock farming and the wild game industry. I wrote about this conflict is a research paper published by the Zoological Society of London in 1996, Conservation Strategies for the long-term survival of the Cheetah. In the article, I wrote about the need to engage with local farmers to save the species,

“The survival of the Namibian Cheetah is in the hands of approximately 1,000 commercial farmers and their willingness to integrate Cheetah conservation efforts into farm management.”

This was true then, and it is still true today. I would like to thank all Namibian small stock farmers who have agreed to work with CCF and our Livestock Guarding Dogs over the past 25 years, especially the pioneers who were there from the beginning helping us develop the program. Without them, we would not have reached this milestone. 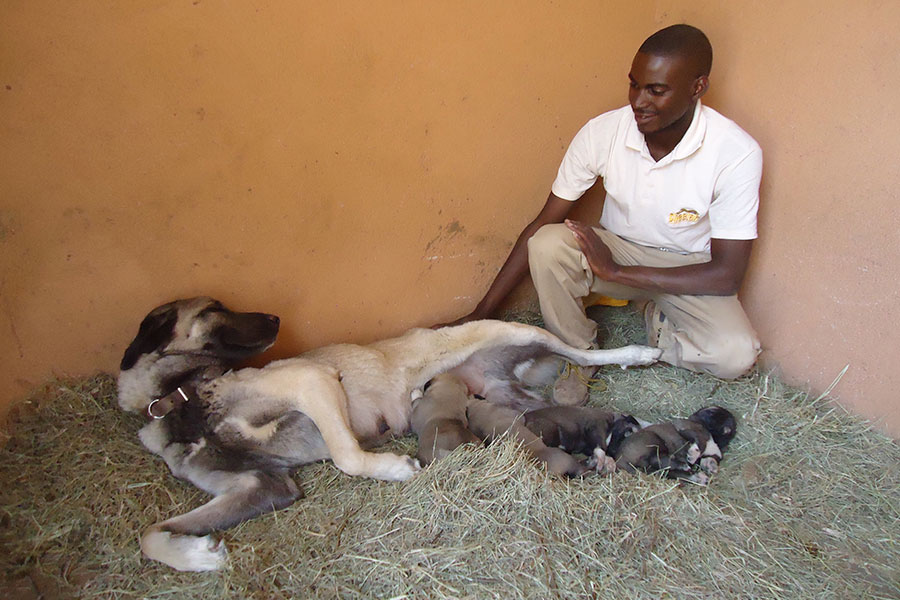 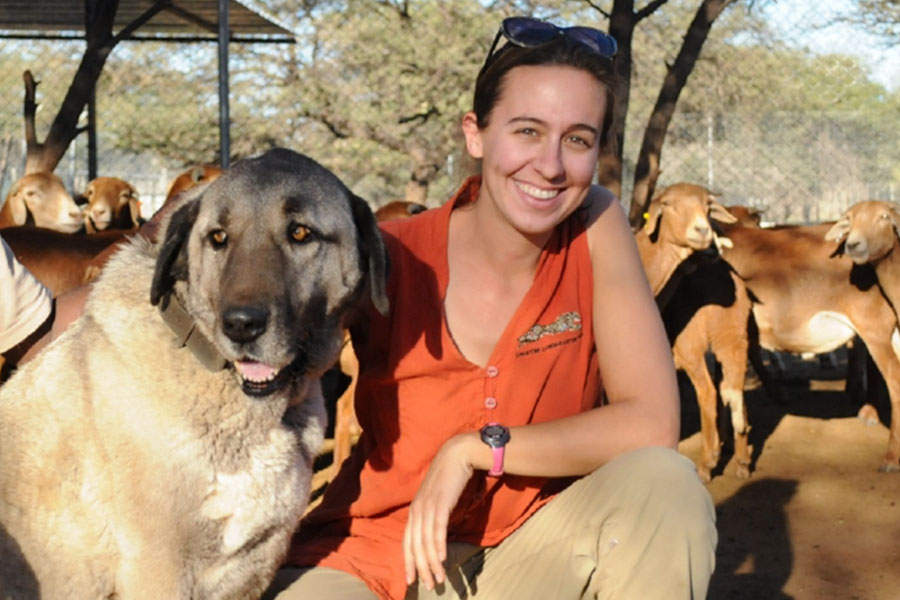 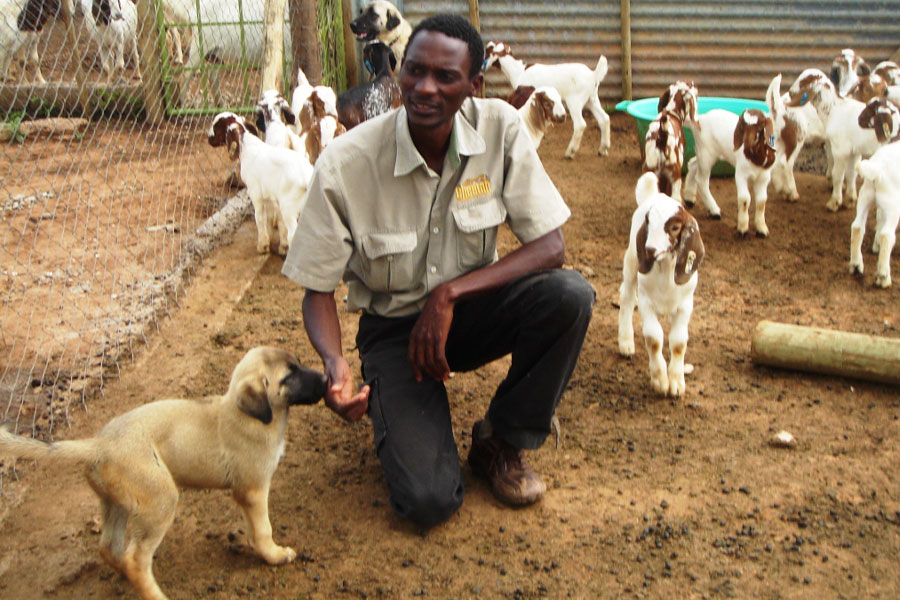 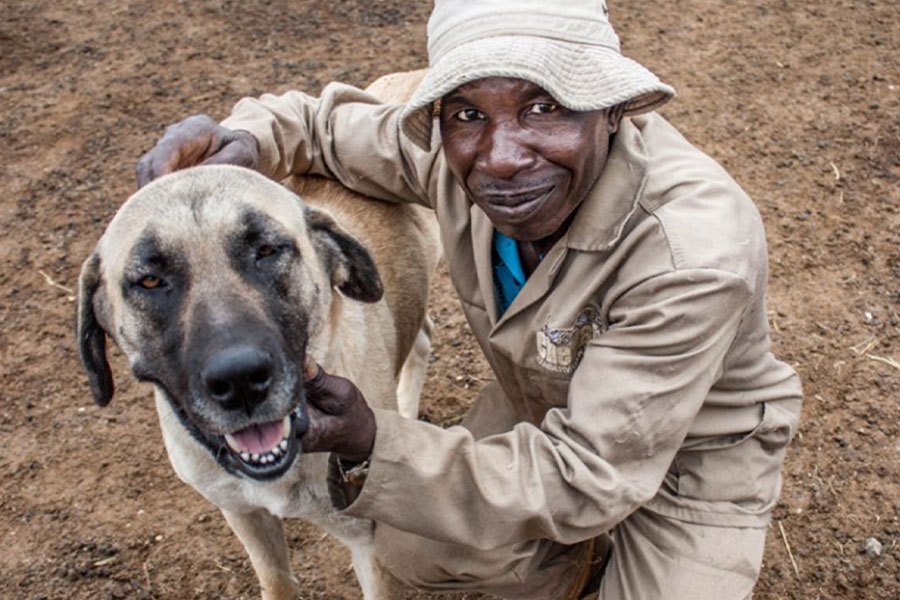 We also would not have been successful without CCF staff that work hands-on with the dogs, the farmers who employ them, and the Boer, dairy goats and sheep on our Model Farm.

Paige Seitz is our Livestock Guarding Dog Program Manager in Namibia. She juggles caring for pregnant mothers and multiple litters of puppies with assisting farmers seeking placements of our dogs. She has been with CCF for five years, and does an amazing job, as have our previous dog managers. All of them have cared deeply for the dogs, the farmers and cheetahs.

Toivo Tyapa joined us in 2011 as Small Stock Manager on our Model Farm. His interactions with our dogs and CCF’s smallstock dairy herd inform our Future Farmers of Africa trainings, and Tyapa’s recommendations improve our LGD program (yes, Tyapa is his last name, and that’s how we refer to him at CCF — his preference).

Gebhardt ‘Gebs’ Nikanor has been with CCF since 2001, working with our dogs as an Education Officer. Gebs places the dogs on the farms and is the person who remains in contact with farmers to check on each dog’s progress. He has been with us so long, it feels like he’s been with us since the beginning of the program, or almost.

Armas Shaanika is CCF’s chief goat herder, and he is the best herder in the world! And he knows our dogs inside and out. Think of him as the ‘Livestock Guarding Dog Whisperer.’ He and I recognized each other as ‘animal people’ and immediately bonded when we placed one of our first dogs with him back in 1996.

CCF’s herd is made up of Boer goats, Damara sheep and Saanen dairy goats that total just over 300 animals. Those animals are housed together with our Livestock Guarding Dogs overnight. As part of their training, Armas takes turns bringing the dogs out to the bush with our smallstock herd during the day. He evaluates our young dogs on their field work and assesses whether rehomed dogs are ready to go back to work. Armas is a Namibian conservation superstar by accident, an almost-divine intervention whose presence has been a real blessing! Without him, we would not know the true potential of our CCF Livestock Guarding Dogs.

Most importantly of all, our dogs would not have become a success without you. Your support over the past 25 years has kept our program going strong. Your donations have enabled us to grow in Namibia, and at the same time, have helped launch sister LGD programs in three additional African nations, South Africa, Tanzania, and Botswana.

Over the past 25 years, CCF Livestock Guarding Dogs have become the Namibian small stock farmer’s best employee. They are also CCF’s most vital, ‘paws on the ground’ partner in cheetah conservation. Please help us celebrate these amazing working dogs by sharing news about our dogs with your family, friends and social networks. Bark out loud for CCF Livestock Guarding Dogs in 2019!

On behalf of Namibian farmers, their small stock, and cheetahs and other predators spared by CCF Livestock Guarding Dogs, thank you for supporting our program.