OTJIWARONGO, Namibia (13 July 2018) – For the 20th consecutive year, Cheetah Conservation Fund (CCF) celebrated the Speed and Elegance of the cheetah with fellow Namibians at its annual Gala Dinner at the Windhoek Country Club on the 13th of July. Jackie Asheeke, a leading Namibian tourism industry expert and highly regarded social commentator known for her lively personality, served as the evening’s Mistress of Ceremonies.

The honoured guest speaker was Dr. Greg Rasmussen, a conservation biologist from the Painted Dog Research Trust, in Zimbabwe, who spoke about his work to save the African wild dog, one of the world’s most highly endangered carnivore species.

The Gala event, which is now much-anticipated by Namibian conservation circles, is a celebration of the cheetah and highlights the efforts CCF has made to ensure the survival of the cheetah in the wild for future generations. The evening included a candlelight dinner, and conservation awards, brought together over 250 guests from the business, conservation, agriculture and government sectors in Namibia and internationally.

The silent auction once again was a huge success, with over 120 items donated by local and international businesses, included artwork, jewellery, Namibian craftwork and tourism ‘get-aways’ at exclusive Namibian and international tourist venues, including stays at the NamibRand Reserve, the Swakopmund Hotel, and CCF’s exclusive Guest House to name a few.

CCF Founder and Executive Director, Dr. Laurie Marker presented the 2018 State of the Cheetah and emphasised the need to conserve Namibia’s treasures and to foster an economic system where humans can live within the natural scope of a healthy, intact and bio-diverse landscape. In addition, Dr. Marker presented the 2018 Cheetah Conservation Awards (see below for bios of all award recipients), of behalf of the CCF Namibia Board of Directors, recognising those who have helped conserve the cheetah and the Namibian environment.

The 2018 Cheetah Conservation Fund Business of the Year Award was given to the Safari Hotel and Conference Centre, for their support of the 2018 Pathway’s Africa International Conference on Human Dimensions in Wildlife (see below for full information).

The 2018 Cheetah Conservation Fund Farmer of the Year was presented to Johannes and Thomas Andjamba, for their care and dedication to their livestock guarding dog (see below for full bio).

2018 Cheetah Conservationist of the Year, was presented to Dr. Jock Orford for his years of support for Namibia’s wildlife conservation (see below for full bio).

If you would like more information on CCF’s research, conservation and education programmes, please contact CCF at: 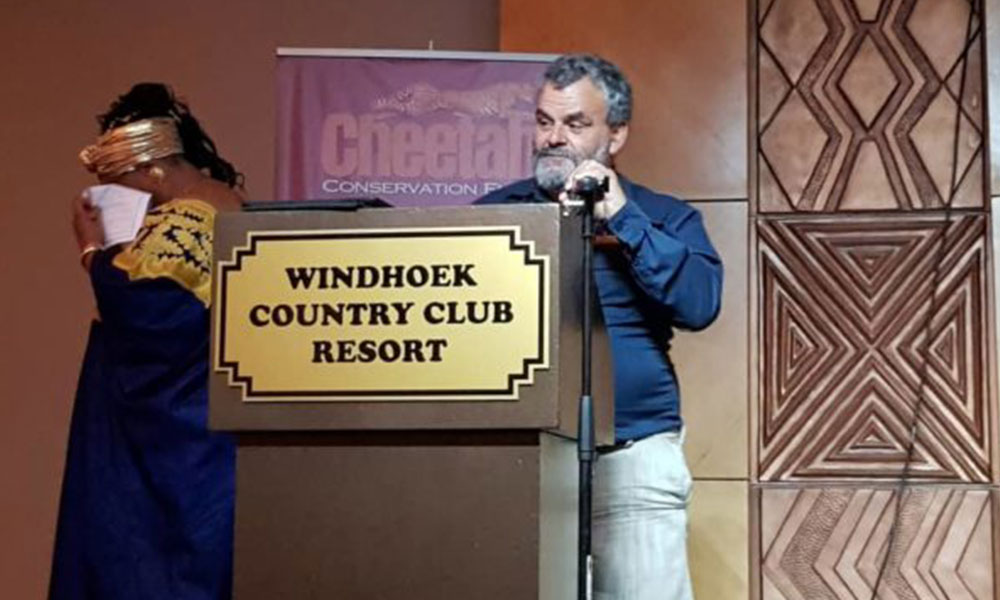 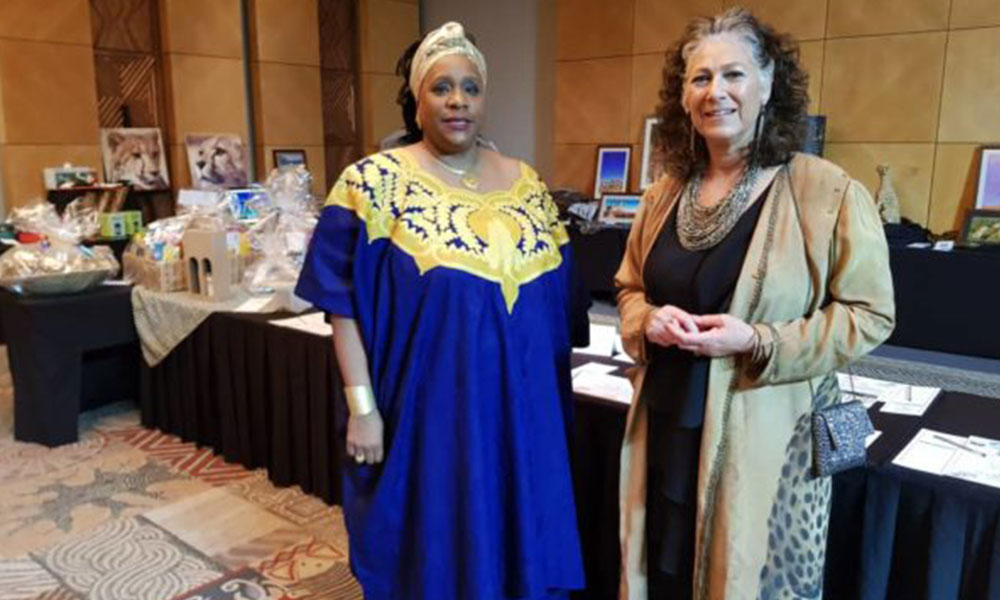 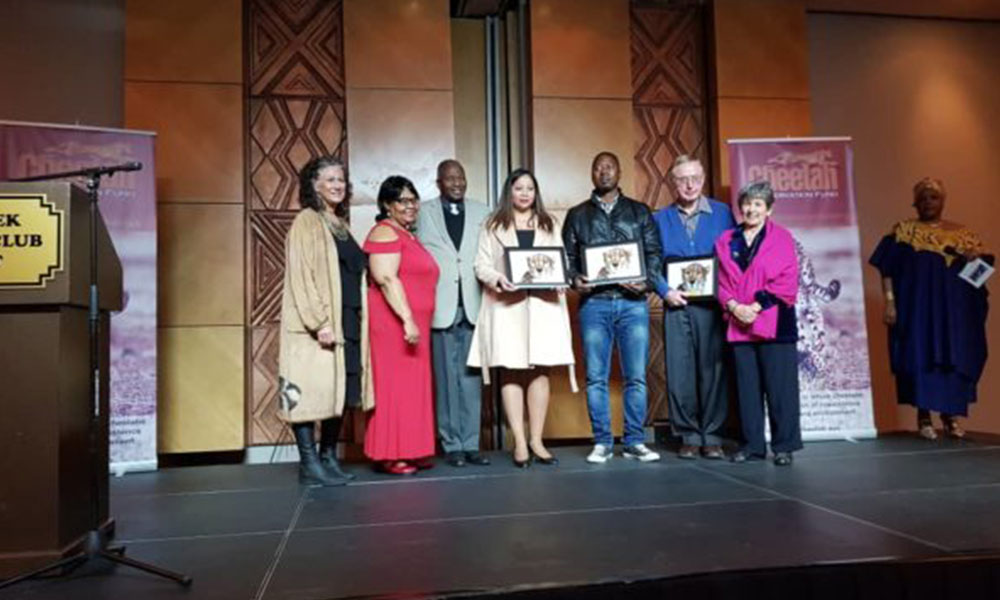 Dr. Greg Rasmussen, a conservation biologist, is the Founder and Executive Director of the Painted Dog Research Trust, in Zimbabwe. He has studied African wild dogs for over 25 years. Rasmussen was born in London but moved to Zimbabwe with his parents when he was 11 years old. He attended Falcon College and then joined the merchant navy. In 1988 his research began by observing African wild dogs in Hwange National Park, and he established the Painted Dog Conservation project in 2002, thus making it one of the longest studies into the species.

Greg got his PhD. from the University of Oxford’s WILDCRU. In 2003 he was involved in a light plane crash which left him severely injured and alone in the African bush. He survived and was eventually rescued. He almost lost his feet but doctors saved them. He is 3 inches shorter now. The story of his survival is featured in the documentary series ‘I Shouldn’t Be Alive’ and the series is called ‘Alive’ in the UK. Greg has over 30 publications on the African wild dog, which he has renamed the African Painted dog, and is one of the world’s specialist on wild dog behaviour. With research as the guiding tool, Painted Dog Research Trust is dedicated to the conservation of this critically endangered species and building tomorrow’s conservationists through Zimbabwean graduate students training.

Dr. Jock Orford, was born and raised on a cattle farm. He was interested in nature and farming from the get go. Aiming to go farming he studied agriculture, graduating in 1959 with a BSc Agriculture. However, Jock decided instead to study medicine. After qualifying as a doctor at the University of London at St Mary’s Hospital he went on to specialise and is a Fellow of the Royal College of Obstetrics and Gynaecology, London. He 1971 moved to Namibia to take up his appointment as head of the department of Obstetrics and Gynaecology in the Ministry of Health. Where he worked till 1998 when he retired from the state department, but continued working in private practice.

Although he worked as a doctor, his interest in nature remained an active hobby which led him to seek alternatives to culling of wildlife. With the support of Bernabe de la Bat and Hu Berry, he undertook pioneering research with his wife, Rosie, in Etosha National Park on contraception in free ranging lions during the 1980’s. Jock was a founding member of the Endangered Wildlife Trust of Namibia, and an early member of the Board of the Namibia Nature Foundation on which he still serves. In addition, Jock is a Founding Board member of the Cheetah Conservation Fund, serving since 1992 and has actively supported cheetah conservation on his own cattle farm near Dordabis.

Johannes Andjamba and his son, Thomas, have been farming goats, sheep, and cattle for over 20 years in the Tsumeb area on the farm Oshipaya Maroela Vaal. While farming they were experiencing more than 10 losses per year from predators. Thomas inquired about assistance with this issue through AGRA, who then referred them to the Cheetah Conservation Fund. Thomas then completed a course with CCF and received a livestock guarding dog (LSGD) for their herd in November 2006. They named him, Otjiwarongo, after the town they received him from. After receiving their new employee, their losses to predators were reduced to zero. Due to the results they received with Otjiwarongo, they requested another puppy in 2018 as he will soon need to retire as he is almost 12 years old. CCF is providing him with a new puppy in July 2018 to continue this success on their farm.