I was born in Vienna and have been drawn to animals and nature since childhood. My first encounter with animals was at 11-years-old, when my parents got two budgerigar birds as pets – a green and a blue one. Although I had no idea how to take care of the birds, I became fascinated with their movements and started to study their behavior as they explored their surroundings every day. The birds stole my heart and I spent a lot of time drawing and sculpting them with wax and even bread.

I grew up reading Karl May’s adventure novels and was intrigued by the North American Indians that were written about. I especially adored the horses on which the native Americans rode. I met a horse for the first-time years later and immediately fell in love with the creatures. It was through my admiration for a horses’ noble attitude and elegant beauty that I grew an infinite passion for movement and dancing.

I met my husband Herbert while dancing at a ball. We were married in 1975 and our son Bernhard was born in 1978. Bernhard grew up alongside his ‘big brother’ Fritzi, the fourth family cat. In 2004 our family moved to the outskirts of Vienna where I worked as a teacher for many years. I loved the profession but eventually I felt the need to embrace my passion for art so I started working part-time in order to attend painting and drawing classes. During this period I really discover the evocative power of colors.

I can’t explain how to create my paintings. They are inside me. When they come to life, they often aren’t soft or frail. My paintings and sculptures were regularly exhibited in Lower Austria, in the greatest Austrian bank BA-CA and even twice – in 2001 and 2016 – in the museum of the famous Austrian sculptor Anton Hanak. My focus medium was watercolor painting, sculpture and drawing. My work included abstractions of emotions through different techniques and creating a peaceful paradise of my own.

There was one particular story I wanted to tell. It deals with big cats, the only purring ones: the cheetahs. Compared with the other big cats, cheetahs are tiny. They are the prettiest and most elegantly speckled predators. Long legs make them the fastest sprinters among the mammals and from their amber almond-shaped striking eyes, framed like with kohl, stripes similar to black tears meandering down to their delicate jaws.

I am attracted to a big cat native to Africa but I am not one for traveling. To convince me to get into an airplane, I had to be promised to find two special things; a tolerable climate and a pleasant landscape. Introduced to southern Africa through books like Serengeti Mustn’t Die by biologist Bernhard Grzimek, which was later made a movie, I began to dream of the vast African Savanna and the herds of native wildlife and the predators who prey on them. I especially love the Cheetah. My husband is not as enthusiastic about Africa as I am. He prefers to travel throughout Europe.

I stumbled across an EARTHWATCH advertisement in a newspaper, being attracted by a picture of a cheetah included with the article. EARTHWATCH is an organization through which anyone can sign up to be a volunteer in the caretaking and conservation of animals all around the world. What interested me most about the article, was a hyperlink www.cheetah.org, which lead me to the website of the Cheetah Conservation Fund.

I researched on Namibia and Dr. Laurie Marker – and Chewbaaka – and when spotting a Volunteers Guide on CCF’s website, and my mind was made up. In May 2010, I set course to Namibia on a journey of 12,000km from north to south, my end destination being Elandsvreugde – the farm upon which CCF’s International Research and Education Centre is based. I immediately sprung into the volunteering work at CCF, helping in all departments and being fascinated by every aspect of work that CCF staff have to do with. Namibia’s unique and breathtaking land – and skyscapes were dazzling to me.

During my stay, Dr. Bruce Brewer – CCF’s General Manager and Dr. Marker’s partner – identified a project that would fit my talents. New solid cottages were built on CCF’s camp Lightfoot, where educational groups are hosted for overnight stays, Dr. Brewer wanted numbers painted on the front of the buildings from 1-10. He also wanted different wild animals to be incorporated into the numbers, and I was up for the job. The day after being assigned the project, I started searching through the books in CCF’s library to find good pictures of local animals. Once I found the animals I took a 40-minute ride to Otjiwarongo to buy the supplies for the project.

The next day I started painting an antelope jumping over the number 1. Upon seeing the mural Dr. Brewer was speechless – there seemed to have been a gap in our ideas – but he was amused nevertheless. On the second day I painted a zebra galloping through the number 2. When introduced to the finished painting Dr. Brewer laughed and I knew at that moment that he was enjoying the surprise of the artistic process. From then on, Dr. Brewer was eager to see what the next day’s painting progress would bring.

Everyday before 5 o’clock, I finished the next number mural. Time was constricting and meant the style of the paintings was loose with limited detail work. Elfi worked fast and concentrated on building character and humor into the work. The number 3 circles the head of a yawning cheetah, and a rhino forks up the number 4.

After seeing number 4 Bruce requested for me to meet him at 9 o’clock in the morning the following day. His confidence in me meant he wanted to let me meet Chewbaaka the ambassador cheetah. At the time Chewbaaka was 15 years old and like most older cats he suffered from kidney problems. Chewbaaka was having a bad day that day and wouldn’t eat. Dr. Brewer was concerned but as they sat with Chewbaaka he began to purr and show he was comfortable.

Dr. Brewer invited me to assist with the caretaking of some of the special orphaned cheetahs residing at CCF such as the evening feeding of five young cubs that were newly arrived in 2014.

Everyday I continued painting the numbers onto the cottage walls – a cheetah cub sitting on top of the number 5, a violet-yellow lion biting into the number 6, and a giraffe framed by the number 7. A hyena sits, howling at the full moon painted within the number 8, an elephant holding the number 9 in its trunk, and finally, a cheetah hunting a warthog through the number 10.

While painting the murals, CCF staff were gracious and brought me food as I did not want to part with painting when lunch time rolled around. During the days I was engulfed in my artistic work and I continued to help with the caretaking of CCF’s animals in the evening.

The Thursday before I departed from CCF I joined a scheduled cheetah run to experience CCF’s resident Ambassador cheetahs running when getting their necessary exercise. On my last evening with CCF’s staff they had a lovely barbecue for my farewell. Dr. Brewer gave a lovely speech that brought m to tears. I am incredibly grateful for the opportunity to use my talents to benefit the cheetah.

Dr. Brewer was also departing to Sweden on the same day and invited me to say goodbye to three of the cheetahs I had been caring for during my stay. Sadly, I said goodbye to Namibia’s clear air and vast landscapes but left a piece of my heart behind. It had been the greatest adventure of my life and I knew it would not be my last visit to CCF. 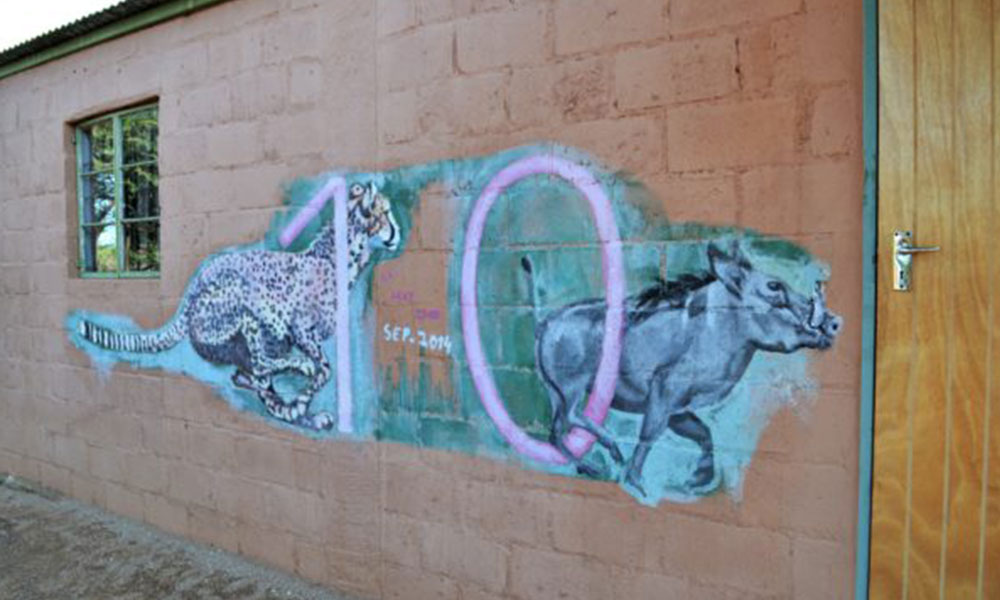 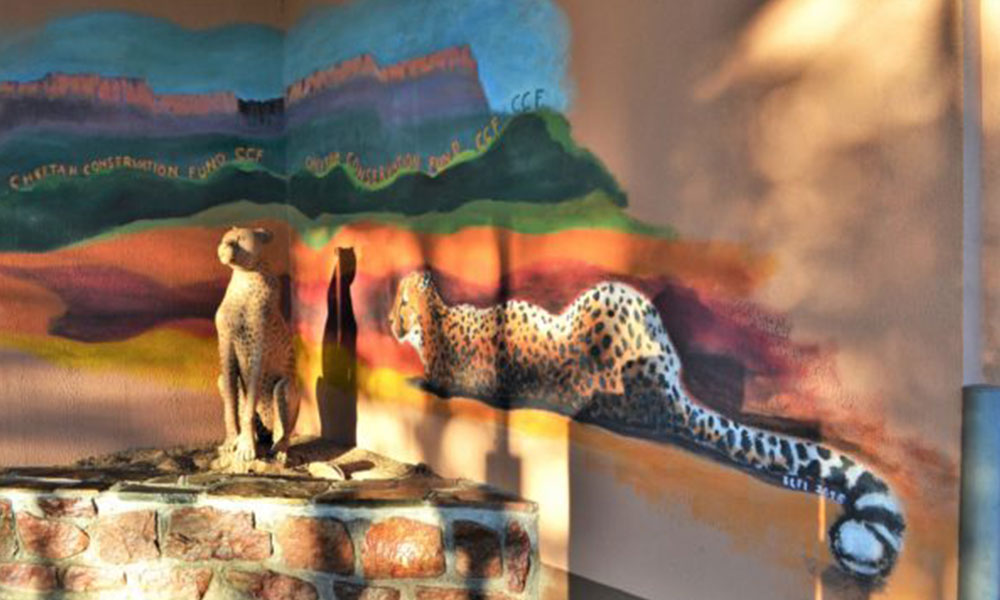 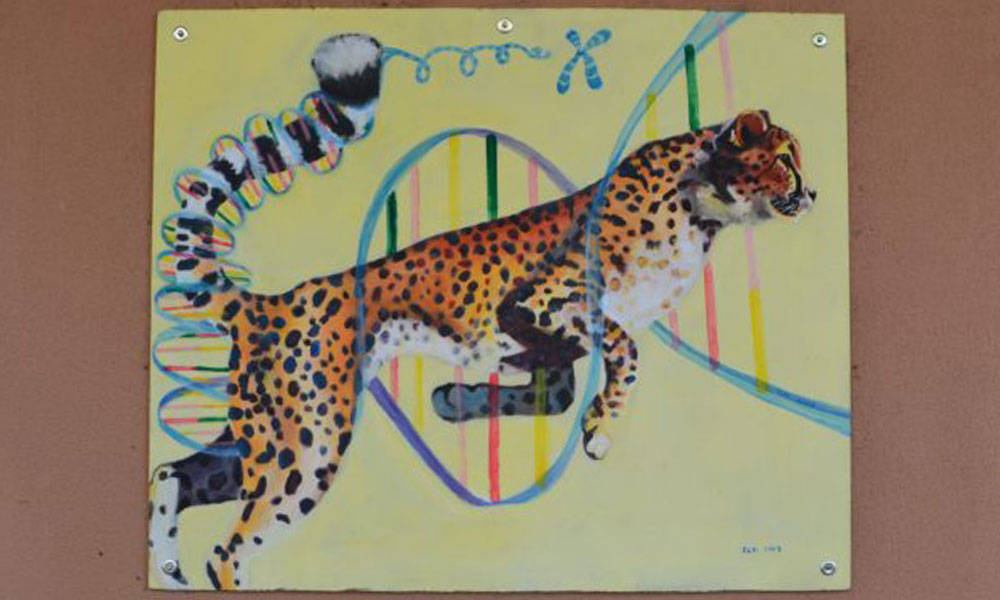 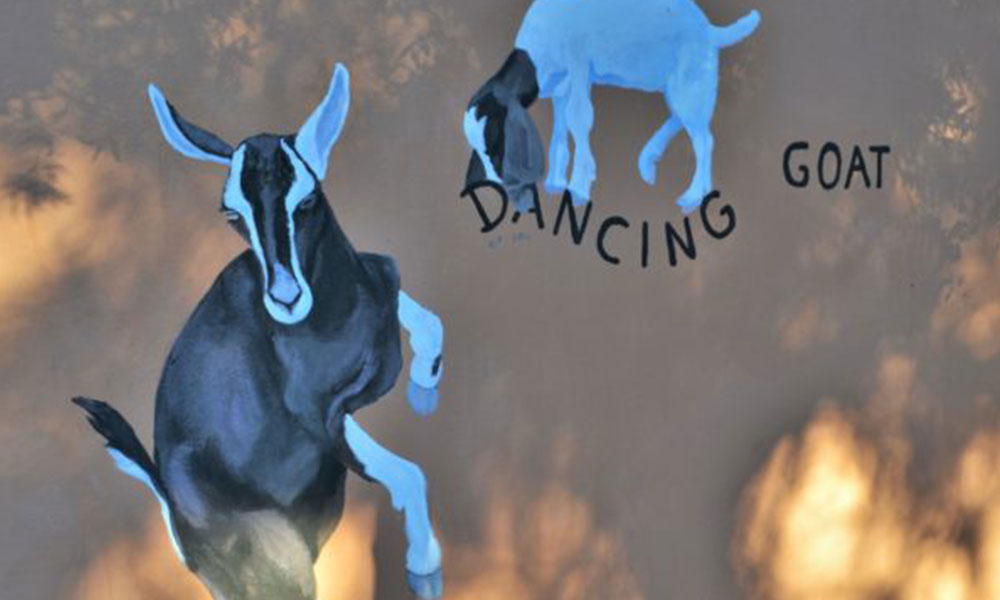 Over the years I have continued to visit CCF. Every time I visit I’m put onto a new artistic project to add to CCF’s walls. I love that I have basically been able to create my own artist in residence opportunity. I am helping to beautify CCF’s campus by bringing my passions for art and conservation together. During my most recent visit in 2018, Dr. Brewer asked me to paint two cheetahs into genetics and veterinary symbols to represent CCF’s Genetics Laboratory and Veterinary Clinic.

Every time I visit I am met with an entirely new group of enthusiastic staff, fellow volunteers and interns, They have all left a lasting impression on me and I hope they are happy to have me working alongside them working on campus. I am eager to be helpful to CCF’s mission and thrilled to have the opportunity to be a part of any daily task happening at CCF. I am honored that my murals will forever be a part of CCF’s walls and serve as a daily reminder of what CCF is fighting to save.