After last year’s very successful joint project in the Gobabis area, the ecology department and the scat dog team decided once again to join forces and unleash the team in the Ondjou Conservancy for a rapid carnivore survey. The Ondjou conservancy is located in Namibia’s East, bordering Botswana and forms the south-western tip of the Kavango-Zambezi Transfrontier Conservation Area (KAZA). It also links to the Greater Waterberg Landscape in the West where CCF has been working for several years. We aimed to get some baseline knowledge of large carnivores in the area as well as the conflict caused by them and potentially other species like Elephant with the local farming community. Therefore we deployed camera traps on roads and potential marking sites of African wild dogs and cheetah and did searches along roads with our scat detection dog.

The team consisting of CCF ecologists Stijn Verschueren and Mike Kakove, together with scat detection dog Enyakwa (Enya) and her handler Tim Hofmann was accompanied by Community Game Guard Kahapavi Tjikuvuva who was incredible with his local knowledge of the area and excellent tracking skills. We had some very efficient but also exhausting 2 weeks in the field where we deployed 70 camera traps, walked 90 km and collected 50 scat samples of which 15 were identified as target species (African wild dog and cheetah) by Enya. Every day we set up camp just next to the road where we stopped working to cover as much ground as quickly as possible. The area is regularly visited by groups of elephants – Ondjou means elephant in the local language – but unfortunately we were only able to see signs of their presence like spoor and dung. The winter time allows for long working hours during the day as the temperatures are rising slowly but therefore the mornings can still be very chilly and it is important to find ways to keep warm . We are already looking forward to our second trip to walk some more km but especially to collect the cameras and see which animals we detected. 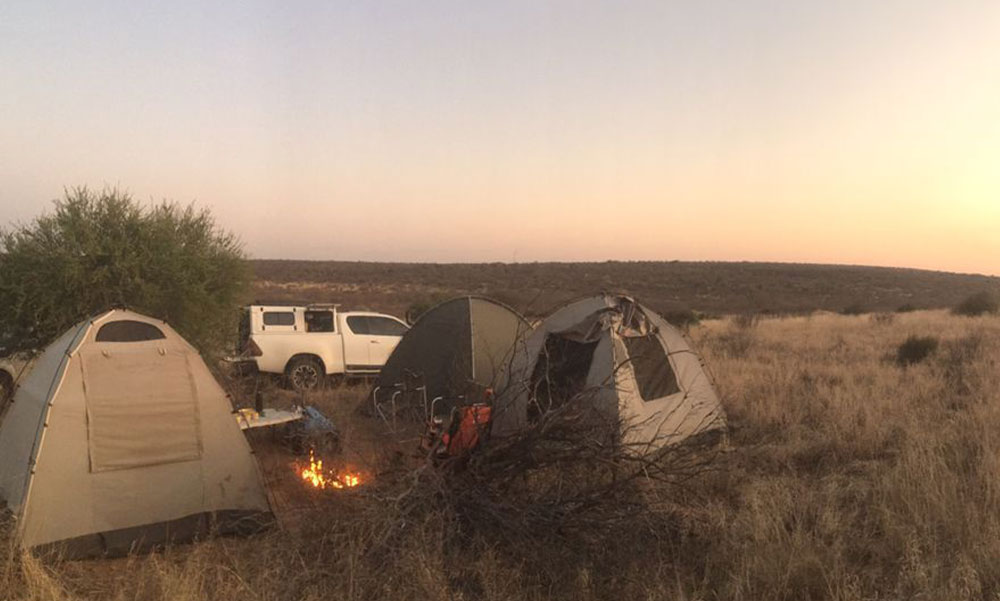 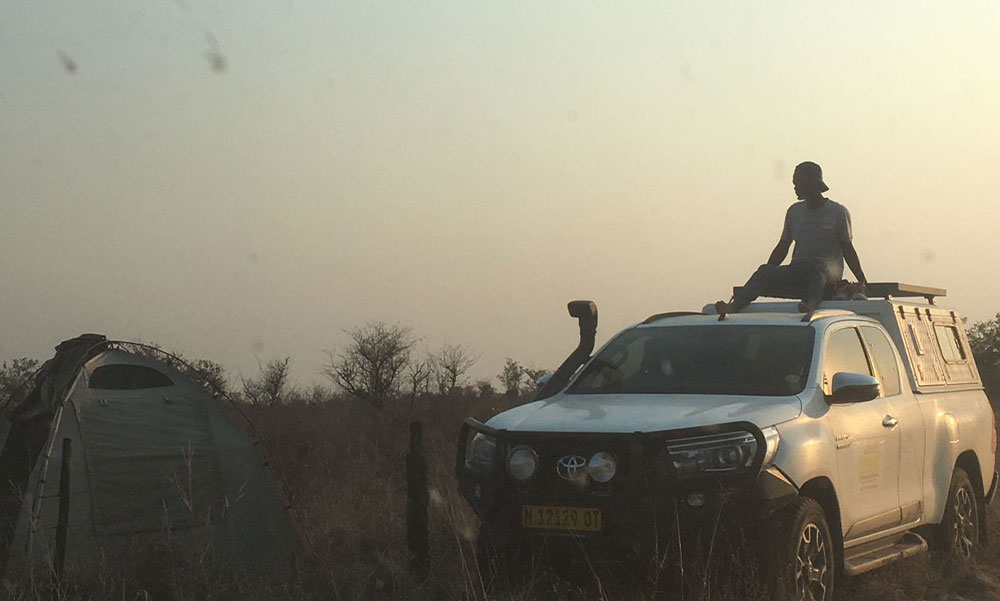 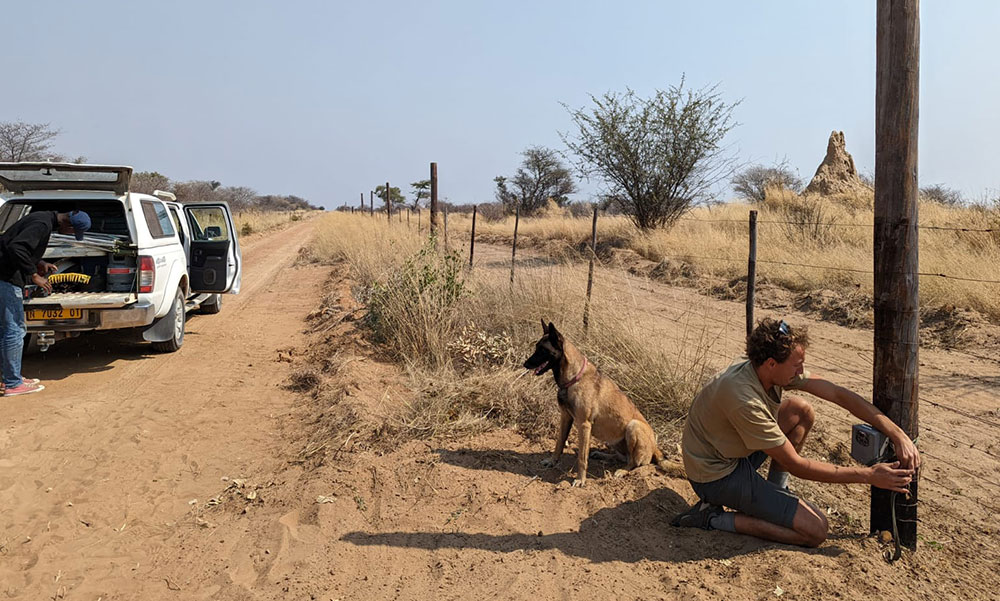 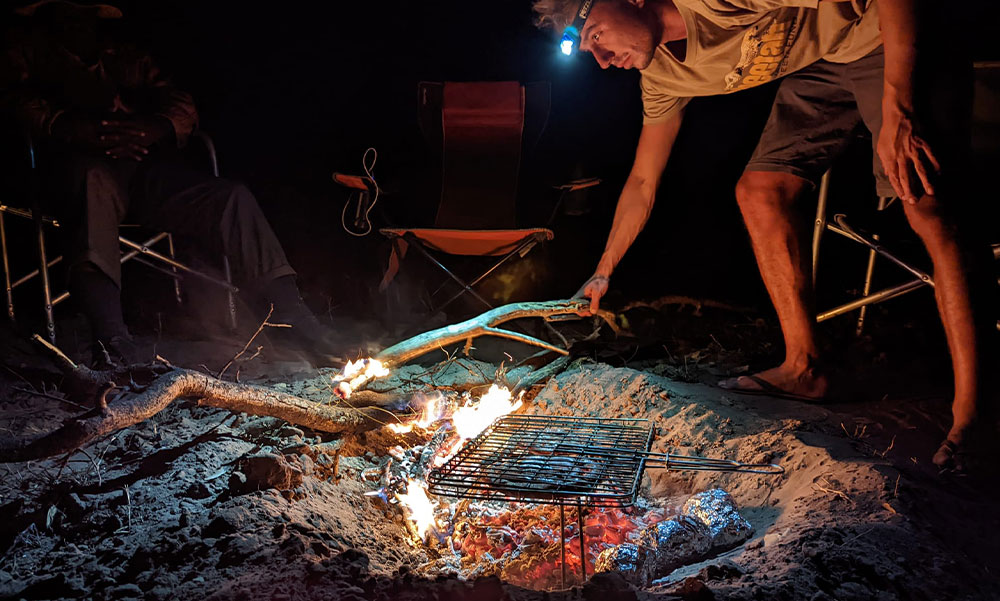 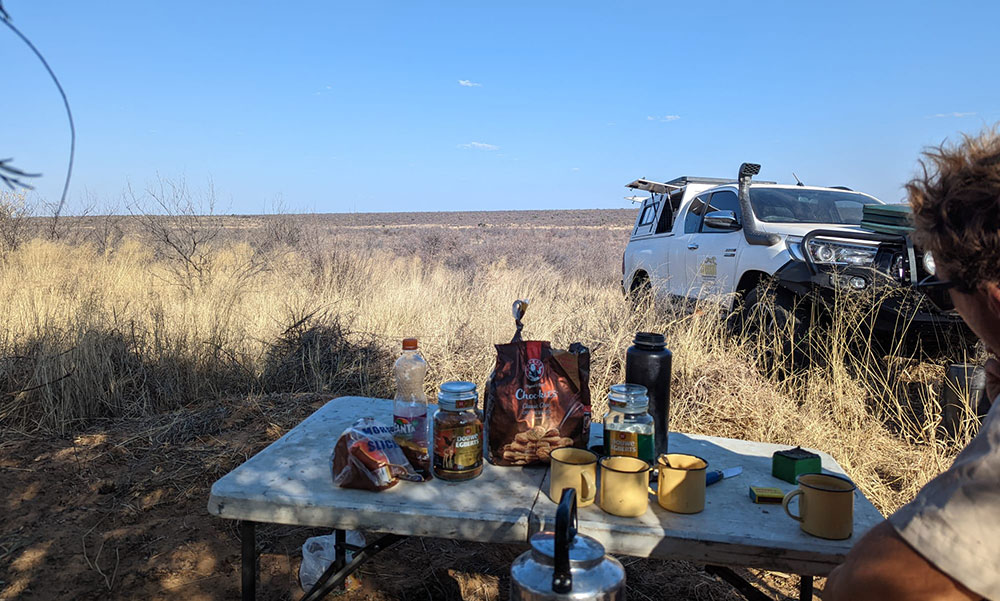 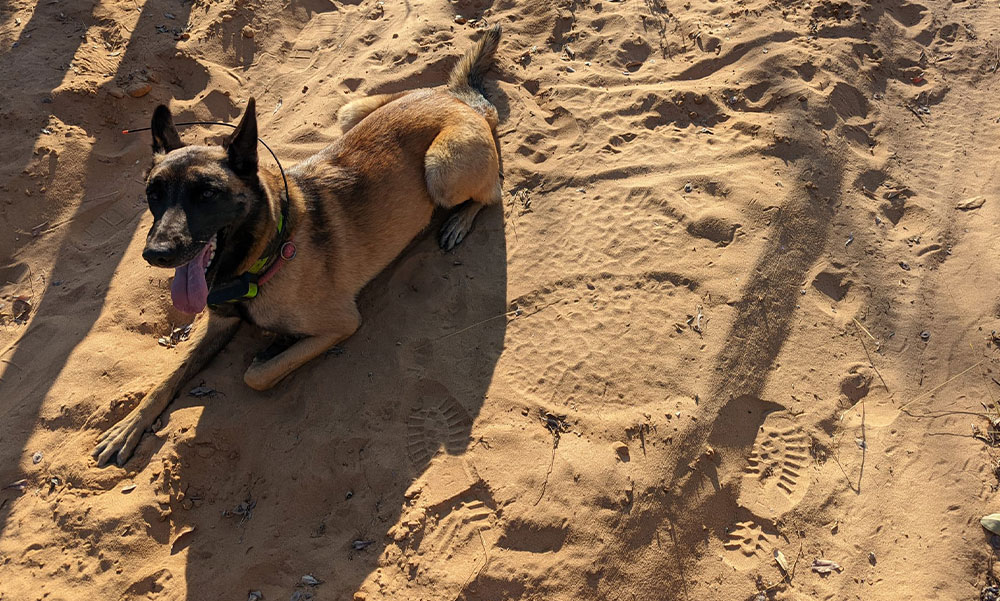 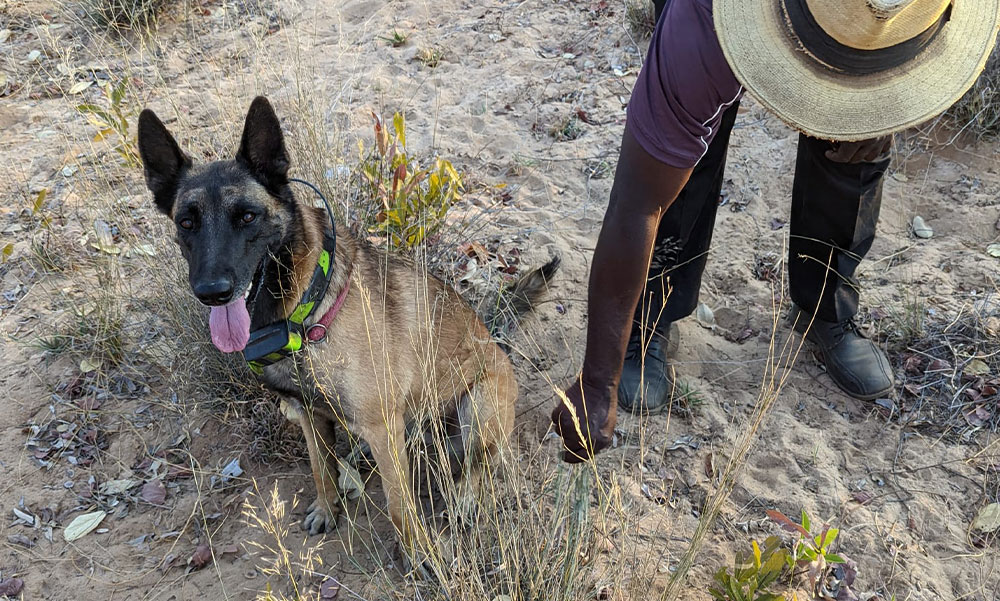 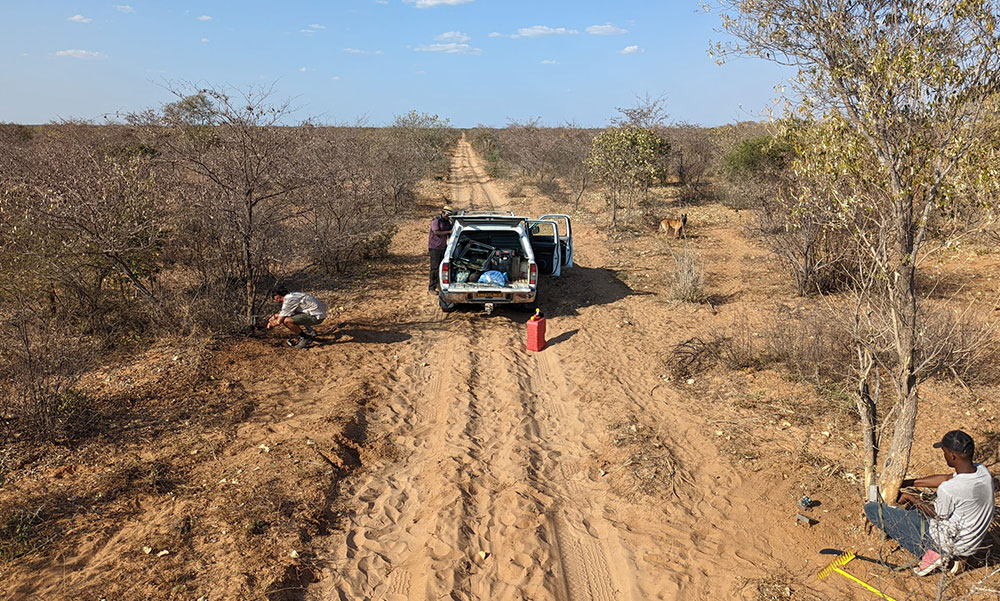 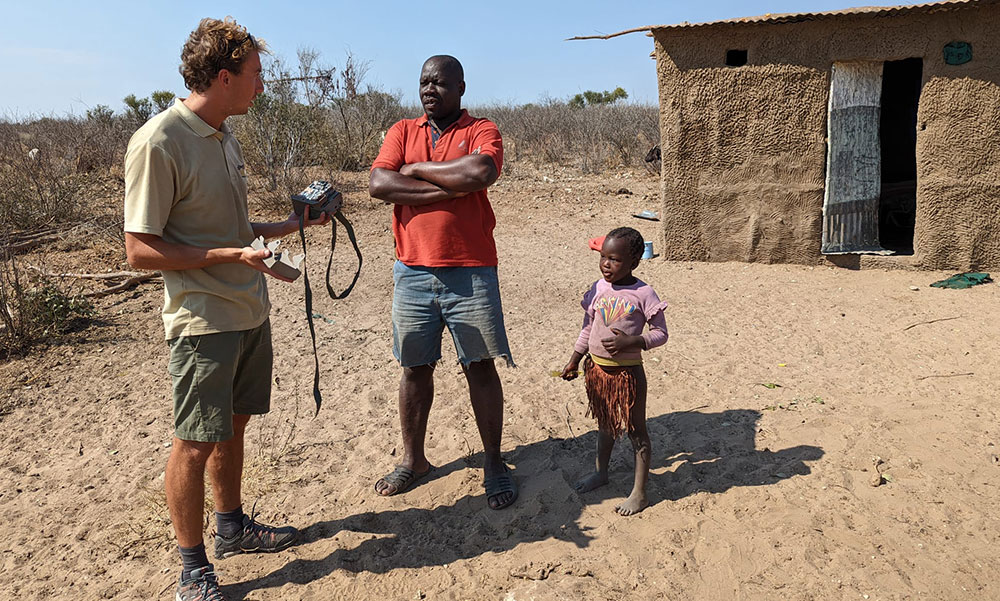 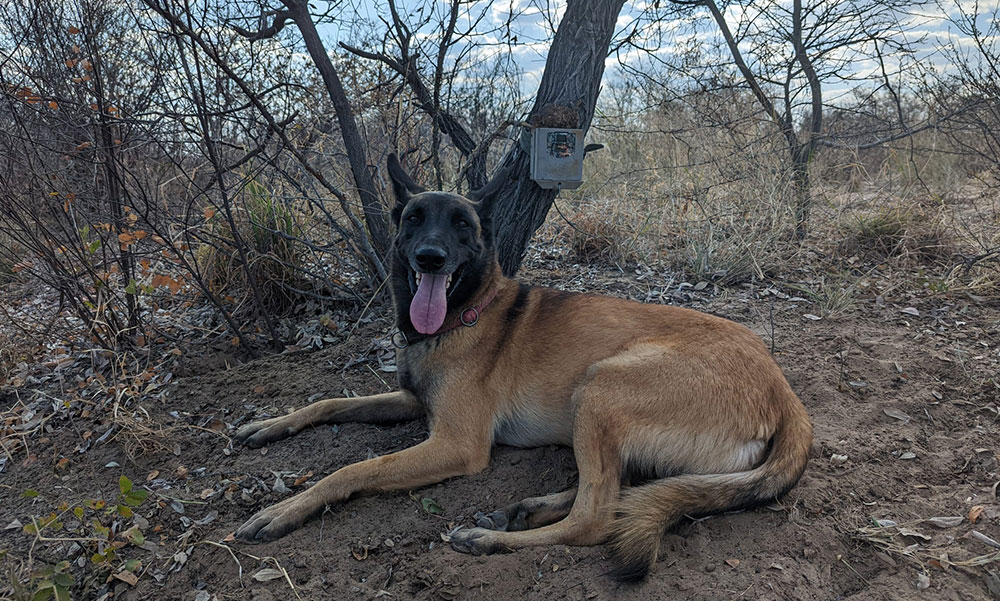 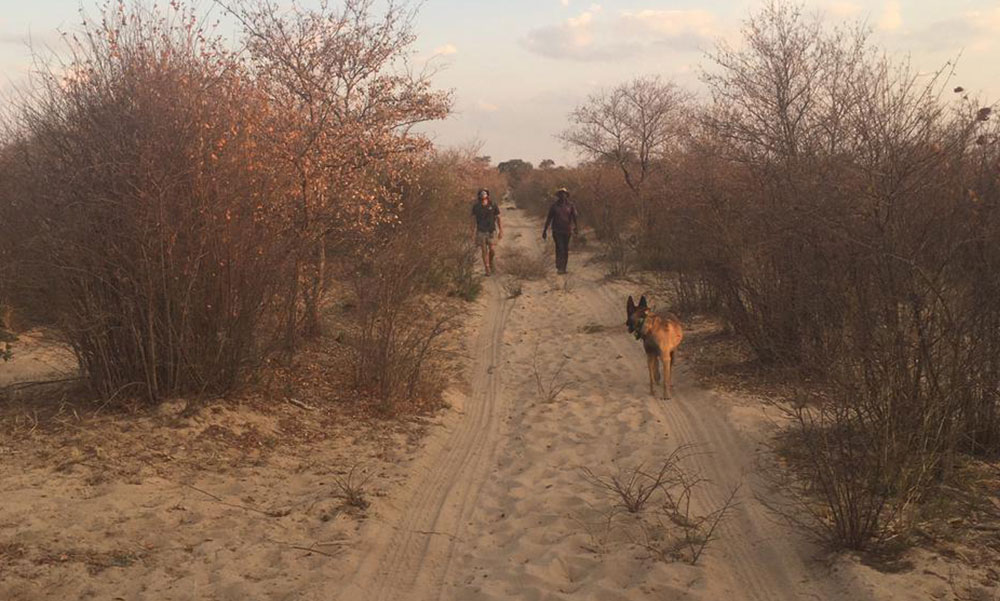 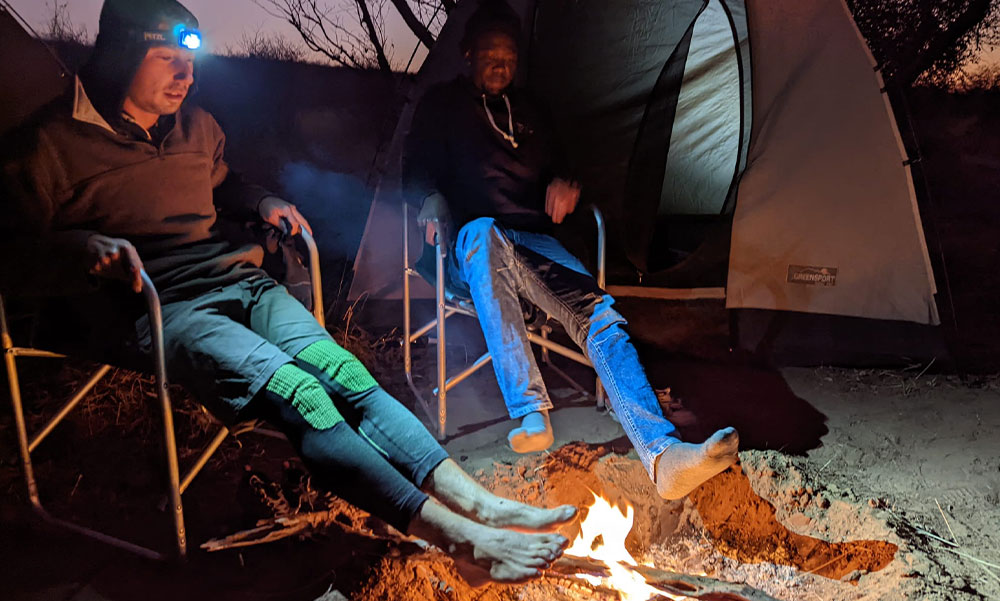 CCF scat detection dog Enyakwa and scat dog researcher Tim Hofmann did their first trip to Angola for this year’s dry season. In the scope of this collaboration with CIBIO (Centro de Investigação em Biodiversidade e Recursos Genéticos) from the University of Porto in Portugal, the team works together with researchers from Angola and Portugal. The scat samples detected by Enya help to determine predators’ presence and their diet. In Bicuar National Park, Enya is searching on a fixed set of roads every visit but due to the seasonally changing vegetation it is always very different. Now in the beginning of the dry season there is still a lot of water in the many natural waterholes and the grass is often very high. This hinders visibility and makes it very exciting when walking on an elephant trail. Last year we added a second area to search for scats which is closer to the park boundaries and is therefore more influenced by human activity. On this trip Enya indicated multiple scats in this area for the first time, making it likely that African wild dogs roam in the area.

In Cuatir Private Game Reserve the floodplains created by the Cuatir River were still reaching up to the roads we were working on which allowed Enya to cool down during our searches. Just a few kilometers down, the river becomes wider and is home to hippos and crocodiles. I am therefore always a bit uneasy when Enya goes for a swim but we make sure to only go to the water at very safe spots. The 3 weeks flew by and crossing the Cubango that further downstream feeds into the Okavango in the cold morning hours where it is still covered in mist was absolutely beautiful and somewhat compensated for getting up in the middle of the night. We are already looking forward to our second trip towards the end of the year which usually is the end of our field season. 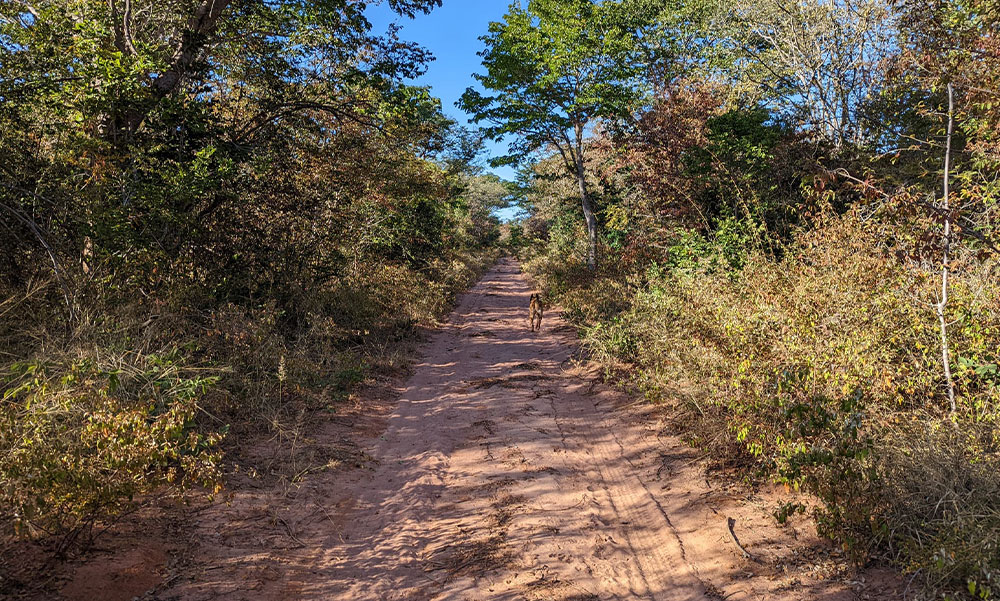 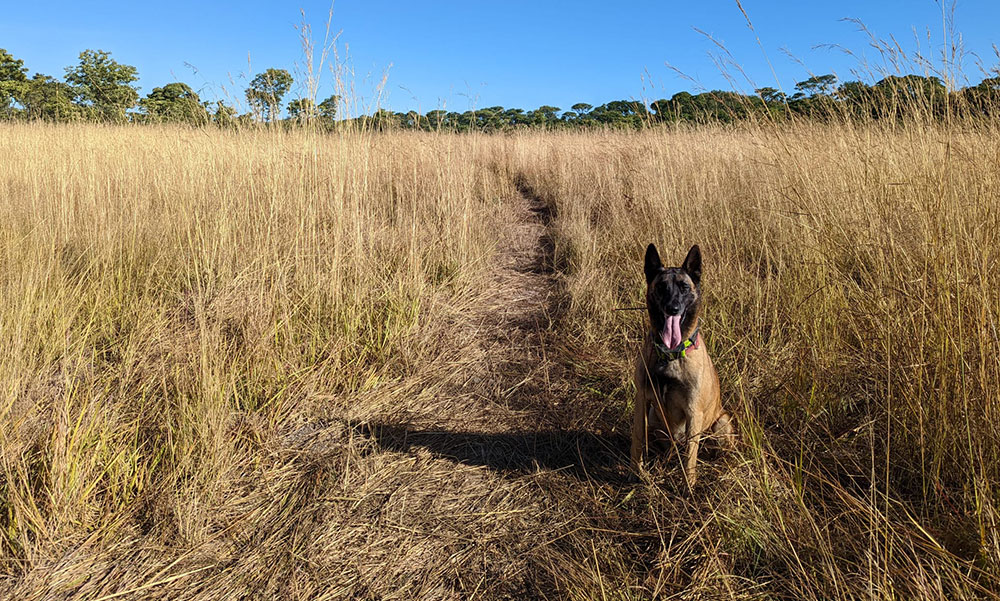 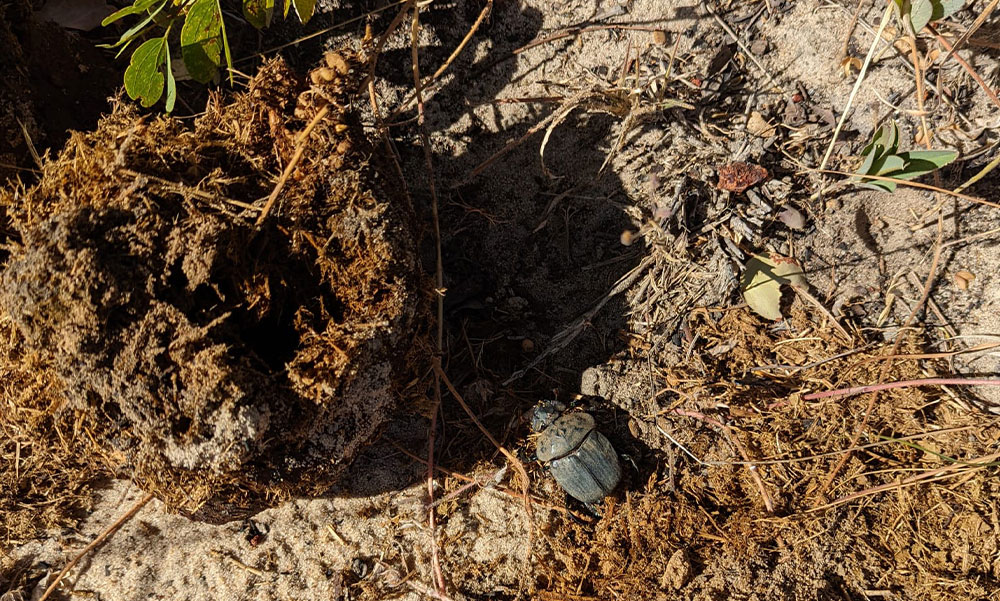 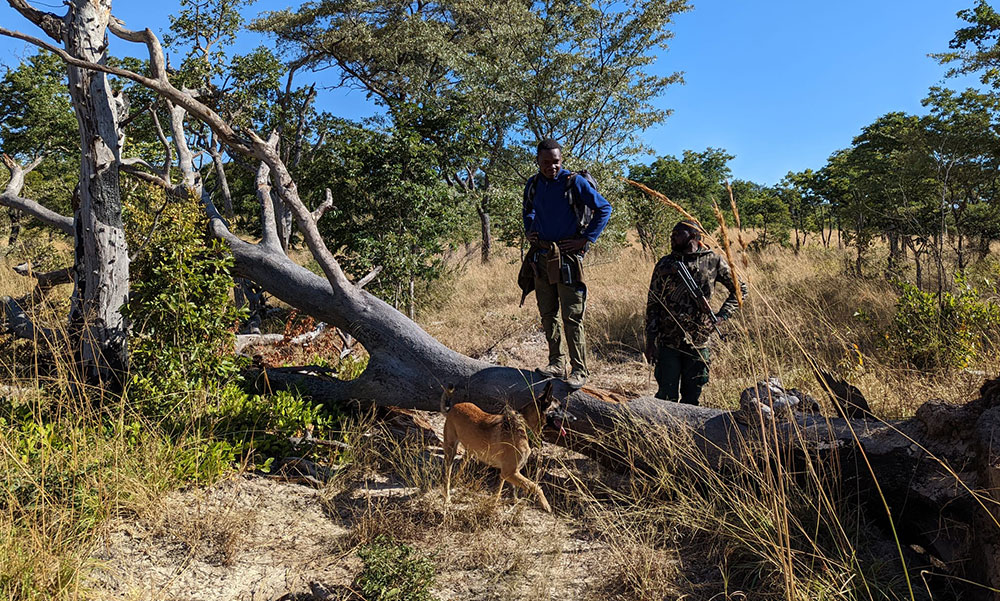 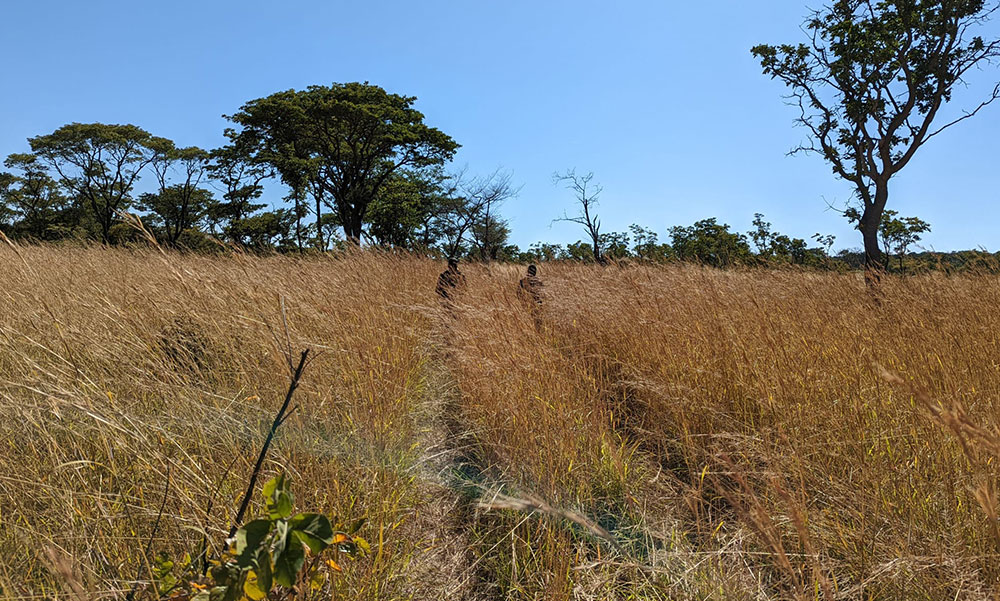 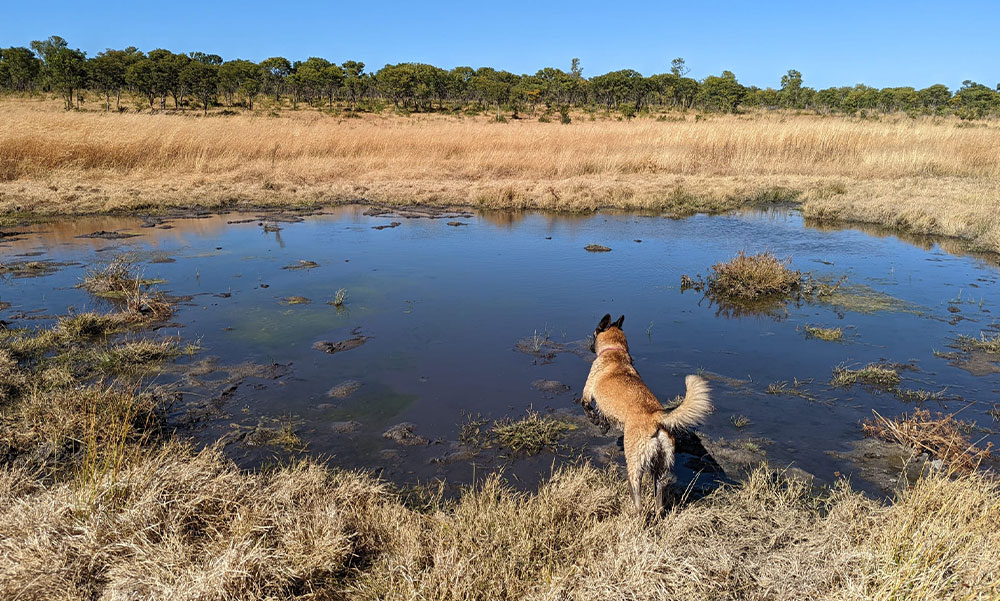 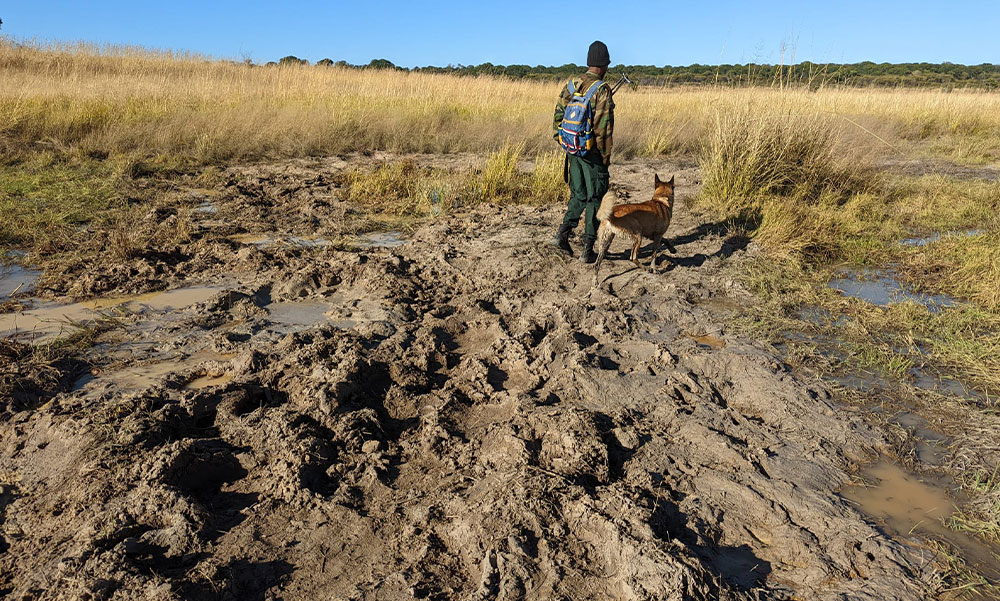 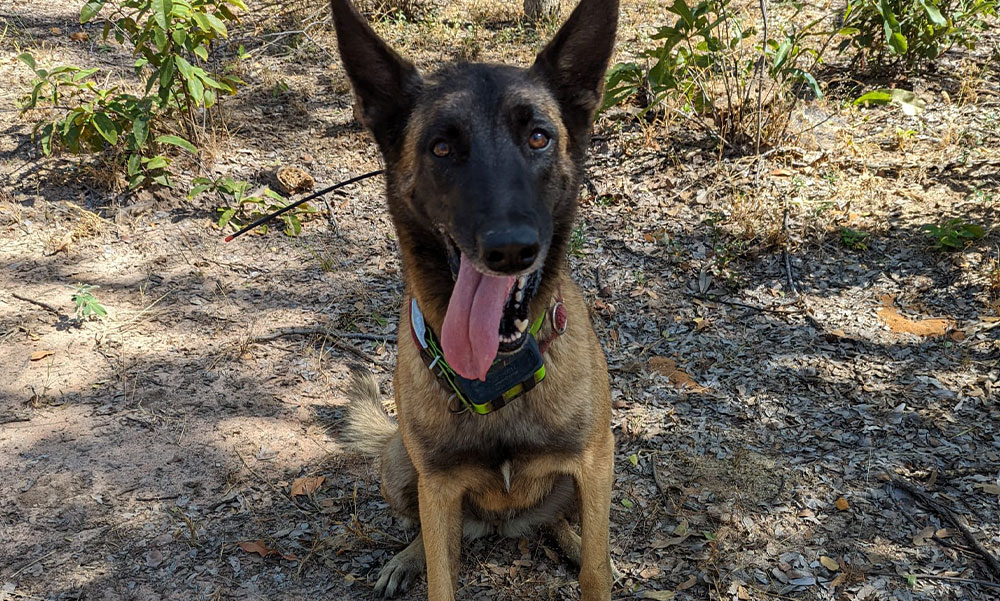 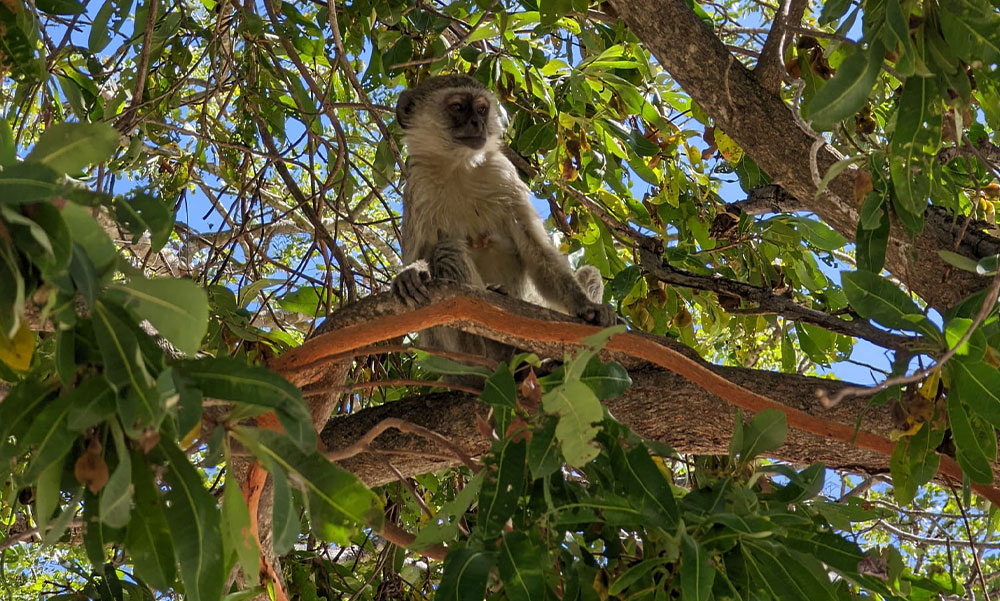 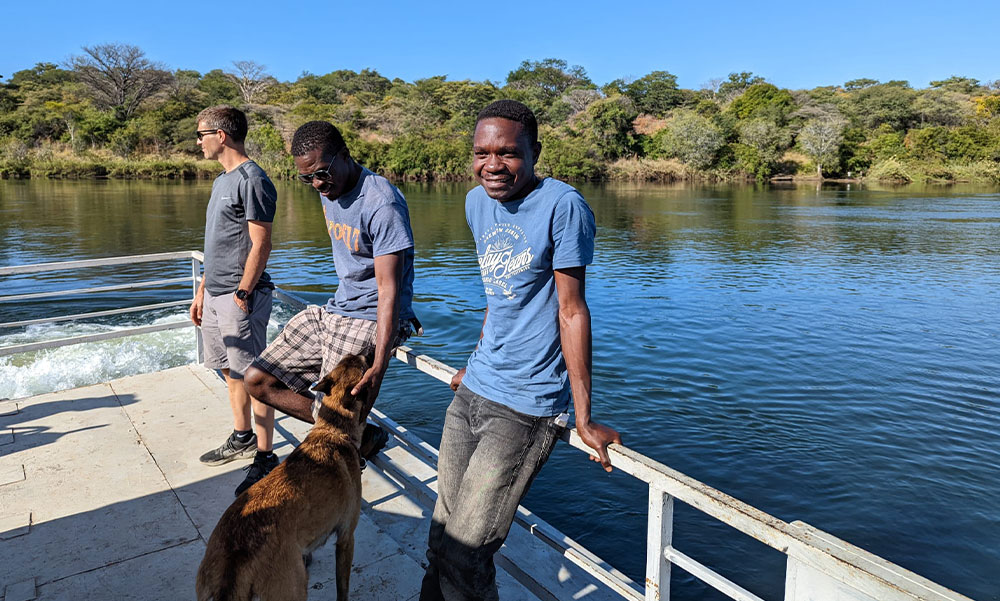 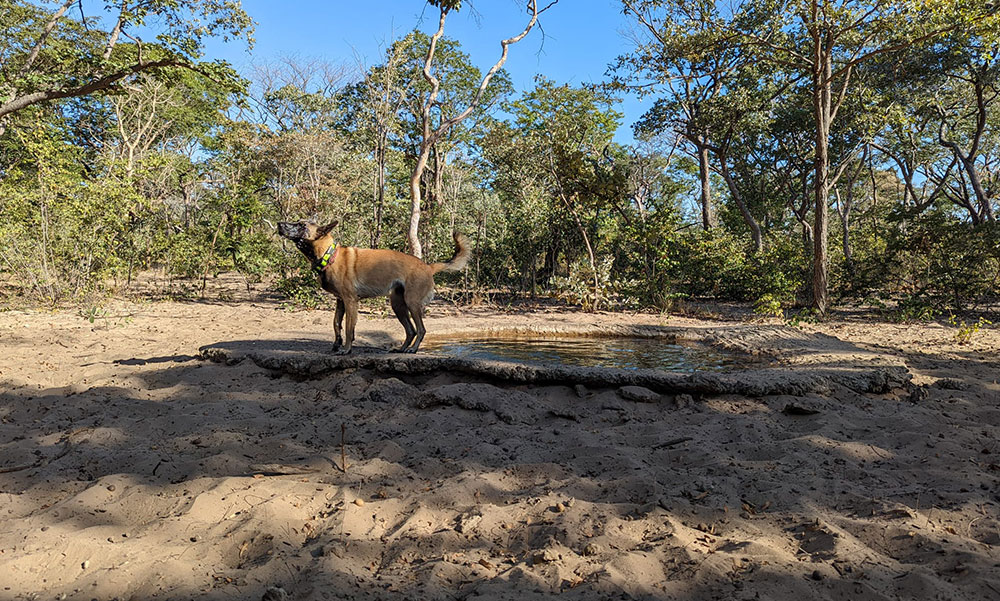 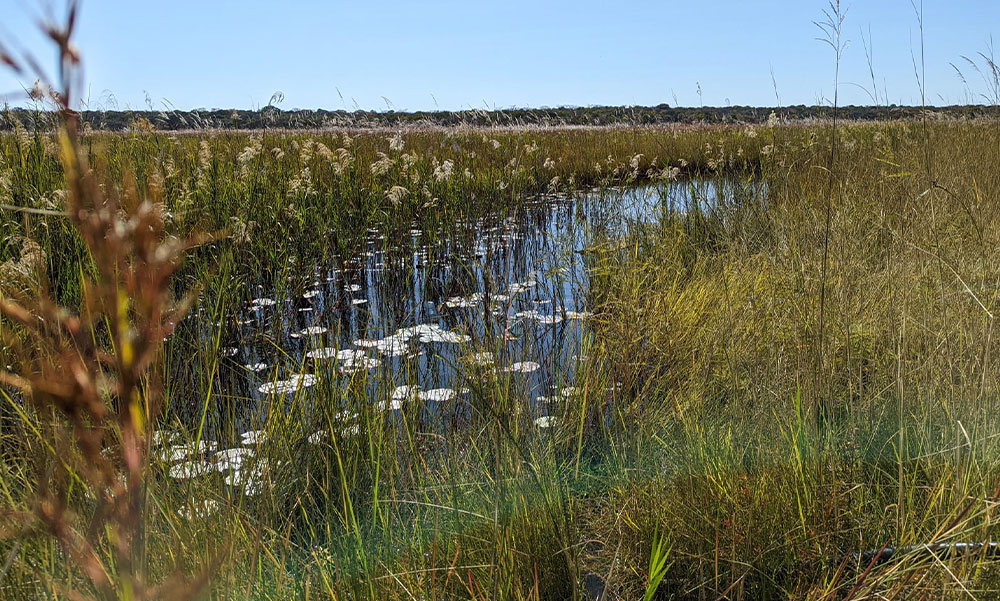 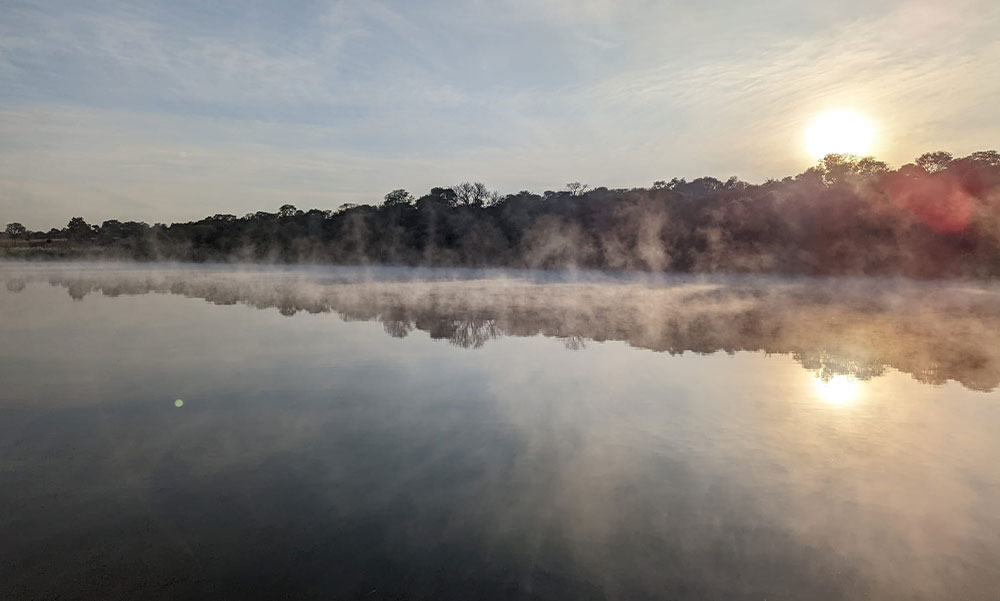 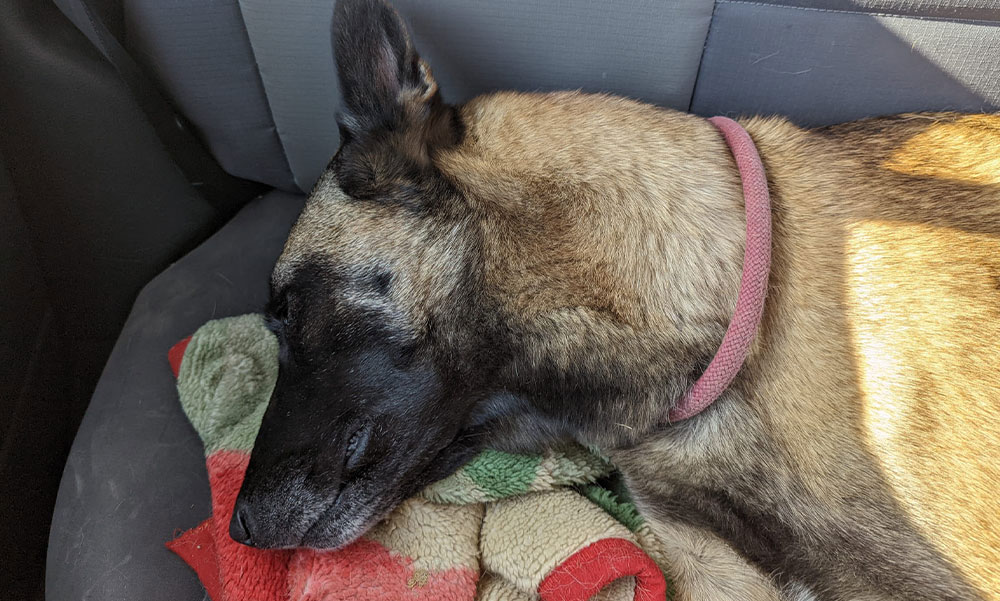 This year the scat detection dog team is conducting its first systematic survey on CCF land and some adjacent farms. This will tie in with the regular camera trapping effort done by the ecology department, monitoring our known play trees and other prominent landscape features such as road junctions or waterholes. Here we have a higher chance to get images of cheetahs and other predators than cameras placed randomly on the farm. With this survey we are hoping to find some new play trees and hotspots of predator activity to place additional cameras in the beginning of the wet season.

We are still in the beginning of our survey and have only walked some 40 km which we know is often not enough to detect cheetahs. It seems that we are lucky because we have already found some scats randomly on roads which are always exciting as those could be from female cheetahs who don’t defecate at play trees. Since we regularly check the known play trees on our land we were very surprised to find scat on a tree that hasn’t been marked in over 4 years. It is great to see that those trees are not completely abandoned and that Enya can help us to prove that by digging out scats under some thorn bushes like in this case. Finally, Enya already managed to find new play trees that weren’t known to us even though they are basically in our front yard.