Scent marking allows cheetahs and other carnivores to communicate with each other by leaving their scent at prominent landmarks such as termite mounds and large trees in savannah ecosystems. These carnivores deposit their scent via scratching, rubbing, urinating, or defecating and often return to the same sites. Such olfactory cues are used to mark territory, advertise dominance or reproductive status, and alert predators. Cheetahs may be the fastest land animal, but they are in fact subordinate to other large African carnivores, so their ability to avoid other predators such as leopards is crucial.

CCF researchers wanted to learn more about how cheetahs navigate and communicate using olfactory cues amongst each other and between other species, such as the dominant leopard. They used nine years of camera trap data at nineteen different scent-marking trees to explore how leopards and cheetahs use and share prominent landmark features.

Not surprisingly, it was observed that cheetahs and leopards do indeed frequently share these landscape features, however they visited these sites at different times. Cheetahs tended to visit during the evening and leopards tended to visit in the early morning hours. During the wet season when scent marking behaviors increased, there was more cheetah-leopard overlap. Cheetahs and leopards also visited trees they did not share, but the selection of unvisited sites changed over time.

Leopards and cheetahs also differed in their preferred marking methods. Cheetahs and leopards both preferred to advertise their presence by urine, however leopards often scratched trees whereas cheetahs frequently defecated. Cheetahs returned to marking sites more frequently, perhaps because their scent dissipates quicker.

Cheetahs have possibly figured out how to strategically use these scent marking sites to minimize their risk of encountering dominant predators, such as leopards. By visiting at different times of day than the leopard and by using some of the sites exclusively, cheetahs may be reducing the likelihood of a dangerous encounter. Scent marking may predominantly occur at landscape features that are instrumental for facilitating inter- and intra-species information exchange. Importantly, this study showed that large trees and termite mounds scattered across the African landscape are indispensable components of the cheetah’s habitat, which need to be preserved to protect cheetah social interactions and ecosystem function. 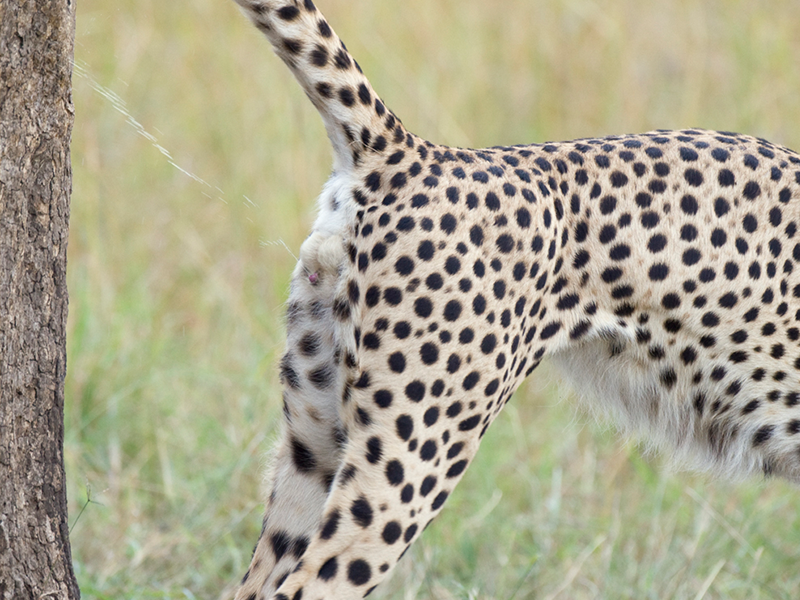