As a vet I often get asked who my favourite patient is, or which one of my cases have been most fulfilling or enjoyable. Predictably I find it a hard question to answer, I have been lucky in my career so far to have worked with some amazing animals, from dogs to elephants to rhinos, and of course cheetah. So having to choose just one is tough, but one patient and one case in particular that I can say for certain is up there amongst my favourites is Duma.

Duma is an adult male cheetah that was rescued from the horrible world of the illegal wildlife/pet trade that plagues the world. It has reduced our beautiful wildlife to mere objects of human entertainment and symbols of ‘power’. It has caused a lot of pain and suffering for many species of wildlife across the world, including the iconic Cheetah.

Known as the fastest land animal on the planet, with their iconic spotted pattern they are amongst the most famous and recognisable species on the planet, people from all over the world will travel to Africa just to catch a glimpse of them in the wild. But many of them are victims of the illegal pet trade, parents killed, cubs stolen and smuggled across the continent and the globe to become someone’s pet. Most of them won’t even survive the journey, and the ones that do suffer a number of serious health issues, malnutrition, parasitic infestations, deadly viral diseases to name a few.

One common issue is malnutrition, being taken away from their mother’s so young they miss out on the vital milk that their mother’s provide that prepares them for life, and they won’t get fed properly, or sometimes even at all and this will lead to many nutritional deficiencies and even starvation. In particular calcium is something they often lack, and this can lead to poor bone development leading to weak bones as they grow, Duma was one of these unfortunate animals.

So one night whilst in his enclosure he fell after being spooked and fractured his pelvis (as far as we know), for a cheetah this can be a fatal injury, the pelvis is such an important part of the body and once that is broken, walking, running, sitting, lying down, even going to the toilet can be a huge issue, and for a wild animal this would usually mean death if another predator finds you in that condition or it seriously hinders your ability to hunt. Since Duma has been with us since he was a young cub he is used to humans and used to being in close contact with us (the keepers and the vets) so he is not completely wild, which for his treatment and recovery was a good thing as we were able to provide the best possible care for him.

So for the first 3 months he was put on strict ‘bed’ rest and on daily pain relief, kept in a small enclosure to minimise how much he could move around, because if left in the larger enclosure with the other 5 adult male cheetah in his coalition he would have made his injury much worse, it is hard to ask a cheetah to rest, you have to force them! Mentally this a huge challenge to put an animal in a small enclosure for 3 months, where he can see his friends on the other side of the fence in the open, and for a lot of the other cheetah this would have been too much to ask of them as would put a lot of mental stress onto them, but thankfully Duma is one of the most gentle and patient animals I have worked with and his demeanour always remained upbeat and friendly, everyday when we would go into to feed him or check on him or just to spend time with him he was always bright and happy, which makes my life as his vet a lot easier.

Once 3 long months had passed, we took x-rays of his hip to see how the healing process had been doing and the fracture had healed really well and he seemed more comfortable on his hip, which was great news! Now that his bones had healed the next step in his recovery was to address the muscle loss in his hips, since he had not been walking or using his hips for much at all for 3 months he lost a lot of muscle around his pelvis and they had become stiff, which was to be expected. So the next step would be rehabilitation/physiotherapy, which is a common part of recovery from a fractured pelvis in domestic species like cats and dogs but in cheetahs it is unheard of… literally.

As far as I am aware there are no cases of physiotherapy in cheetahs that have broken their pelvis, or if there are then very few cases. But I wanted to give Duma the best possible chance of making a full recovery so I spoke to Rachel Cartwright (from 4PointPhysio), a fantastic certified animal physiotherapist in the UK who has been treating my own dog back home for his hip dysplasia, so I knew she would be a great person to ask. So she sent me a bunch of exercises she usually does for dogs & horses that help build muscle in the hip and bring back functionality, and so from the exercises she gave me and I took inspiration from there and adapted it to what I have available to me in Somaliland and in our facilities and created a physiotherapy program for Duma… the cheetah.

I had set out a 4 week plan for him, gradually increasing the difficulty and effort before aiming to have him ready to return to the main enclosure and rejoin his coalition. This was a big ask, to delay his return by another month when 3 had already gone but I knew Duma could handle it. So using a bit of minced camel meat in my hand I would entice Duma to follow me from one side of the enclosure to the other, where he would have to either walk over, jump over, crawl under a set of obstacles (see photos below), these obstacles consisted of either wooden panels or long bamboo poles that I would place through the wire meshing at various different heights which would make him exercise and use his hip more and more in order for him to get me, and more importantly to the meat. 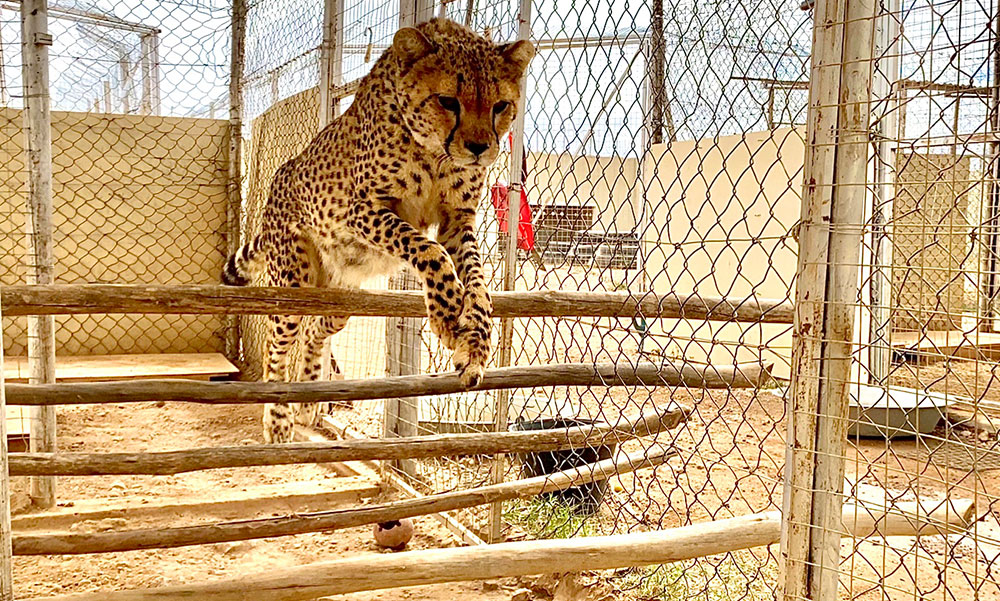 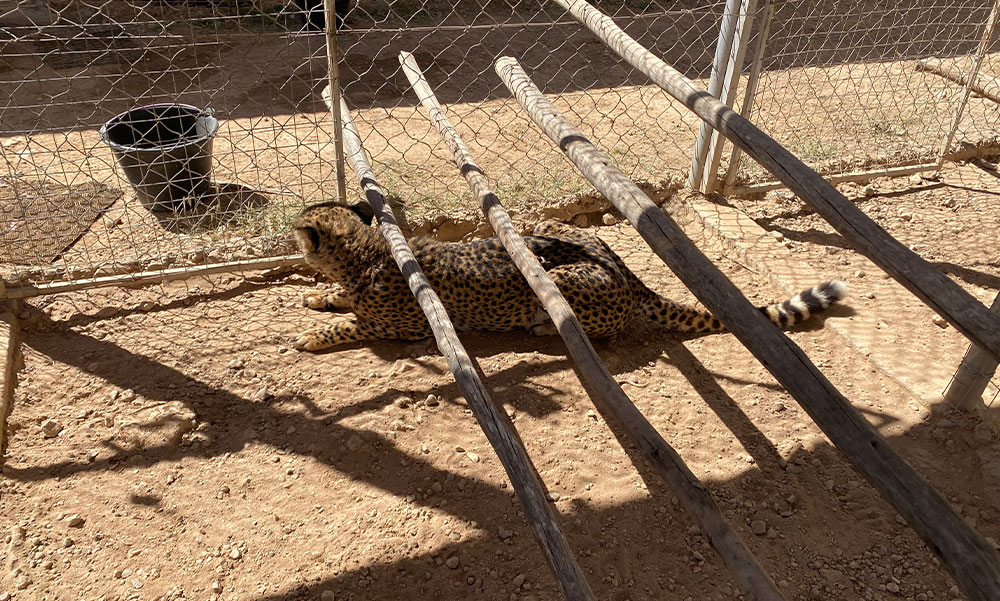 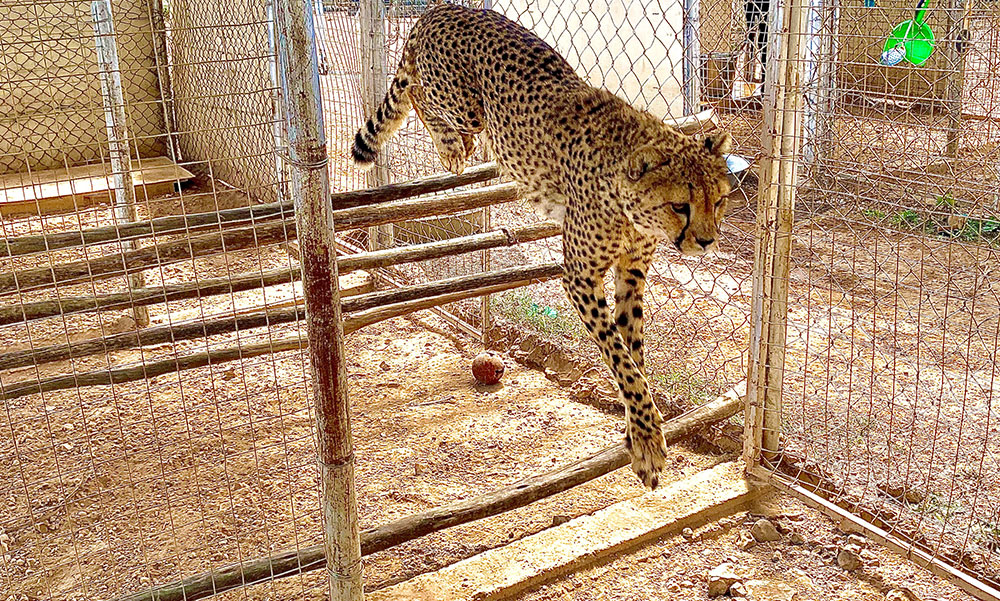 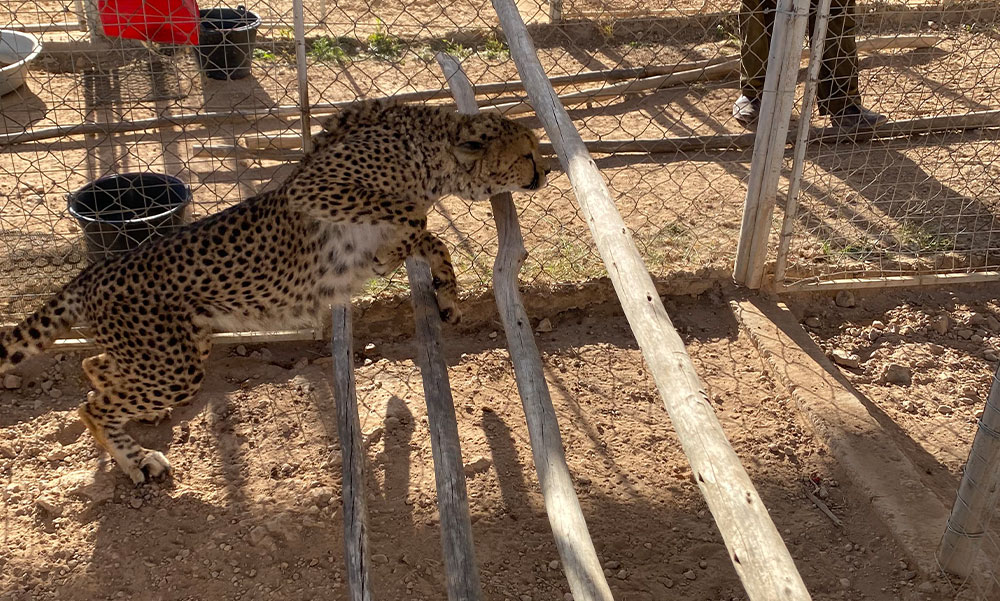 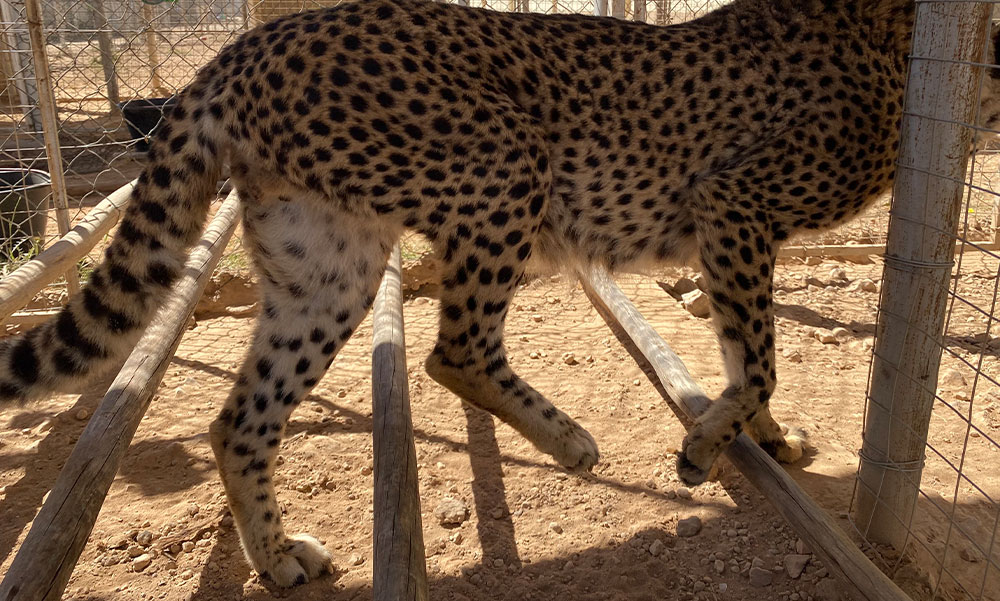 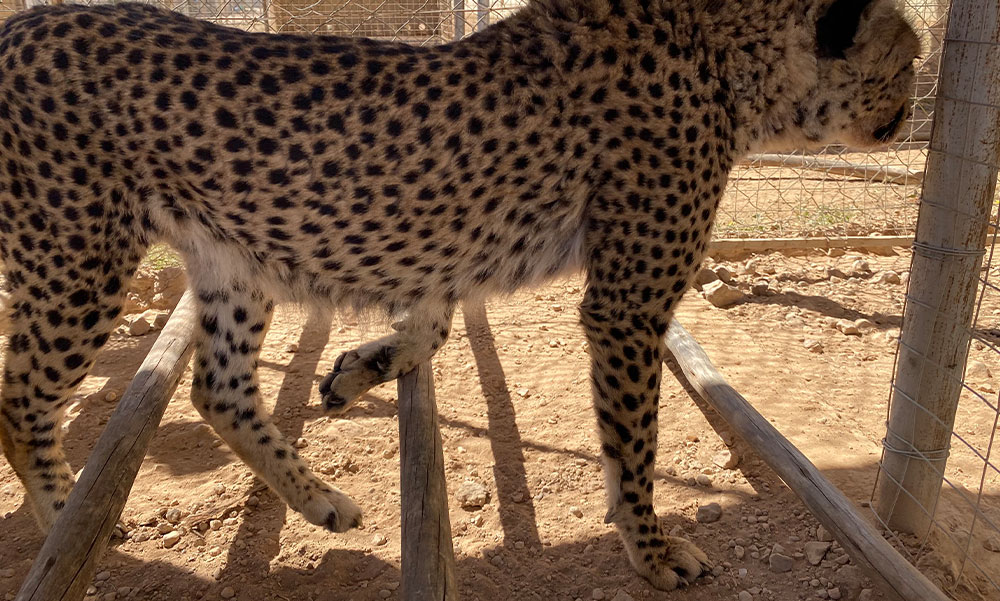 This was only possible due to the close bond I had with him, I had known him for months so I knew I wasn’t in harm’s way and I knew and trusted Duma’s character, not every cheetah that we have would be allow me to do this with them. Duma’s friendly character made it possible, he would gently lick the meat off my hand without ever taking a chunk out of my hand, but this is not something I recommend for anyone to do, this was only for the treatment of Duma’s injury and not for my entertainment. I must make that point very clear as we are fighting to end the perception that wildlife should be kept as pets.

After 4 long weeks, Duma became stronger and fitter every day, our daily sessions were working really well, and Duma himself would really enjoy these sessions as they were also a form of enrichment which is important to keep his mind stimulated when an animal is kept in such a small space then they can develop stereotypic behaviours due the mental strain in puts on them, something you often see of animals in captivity. So not only was this helping him physically but mentally as well, even if towards the end of our sessions when I was pushing him and he was getting tired he would lie down in protest and sulk at me because I was asking to do a few extra laps, overall he enjoyed it…

Once the month was up he looked much fitter and stronger, he wasn’t on any medication and was very comfortable walking and jumping he was ready. So I finally let him out and his 5 best buds one by one greeted him, played with him, groomed him and eventually they all slept together and were happy to have him back with them. Since then he hasn’t looked back, his hip hasn’t caused him any issues and he’s settled right back into life with his coalition. The only negative for me was that I didn’t get to have my daily sessions with him! But he was back with the other cheetah where he belonged. That is why Duma and his fractured pelvis will remain one of my favourite moments in my veterinary career.