For a waterhole game count, we spent twelve hours in a hide close to a waterhole to identify and count all animals that pass by. This is done to estimate the current densities of different species on that property named Bellebenno.

In our hide, we had to stay as quiet and invisible as possible. Equipped with coffee, snacks, binoculars and camera, we started our mission.

We arrived at 6:00 in the morning and the first wildlife we saw was a massive python sleeping above the entrance of the hide. At least that is what we thought in the dim light of the torch. All three of us took a comfortable step back and had a second look. It was quite impressive when we realised it is “just” a big gecko family, snuggling together. What a start 😊

It was still dark and quite chilly when we made ourselves comfortable in the hide, but some hot coffee helped to warm up a bit. Shortly after, we saw the sun rising and soon the coldness of the morning was forgotten and replaced by the warm rays of the sun.

I was overly excited and curious what we were to see. Of course, we hoped for a leopard or a cheetah, but I would be happy with everything that came along.

We first had a big male warthog arriving, taking a sip of water. Shortly after, a whole warthog family joint. It is so cute to see the little piglets dribbling around and exploring the spot 😊

Four plains zebras came closer towards the waterhole a couple of minutes later, but when we moved our heads a bit forward to see them better, they probably heard us, became suspicious and left the scene. It is incredible how much noise a human makes with the slightest movement!

Sometime later, we silently stepped out for a minute to stretch a bit, when we saw a giraffe starring at us, just like 50 metres away. And then four more heads, and another two. We finally counted around ten individuals, all stalking us – which is their typical behaviour when they see something suspicious. It is impressive how they fit themselves into the environment. You would think that an animal that tall cannot hide, but believe me, they do. They actually don´t really hide; they just stand still and are perfectly camouflaged with their pattern. To me it is still a mystery how they can become so invisible. Anyway, they watched us sneaking back into our hide and continued their way.

Over lunchtime, it was very quiet, and time passed slowly. After a 2.5 hour gap of NO ANIMAL AT ALL (guess they tried to avoid the midday heat), not only the warthogs came back to drink and take a nice mud-bath, but also the giraffes (not for the mud-bath though). One by one joined the scene and once they all arrived, we counted 14 adults and subadults altogether. I have not seen such a big group of giraffes so far and what surprised me most is that they were all males, apart from one subadult female. 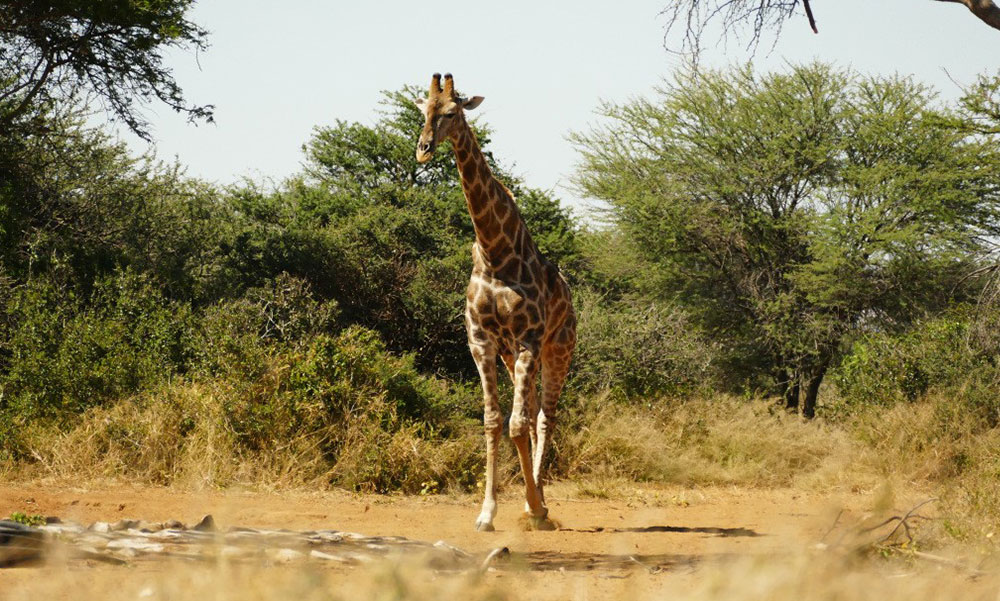 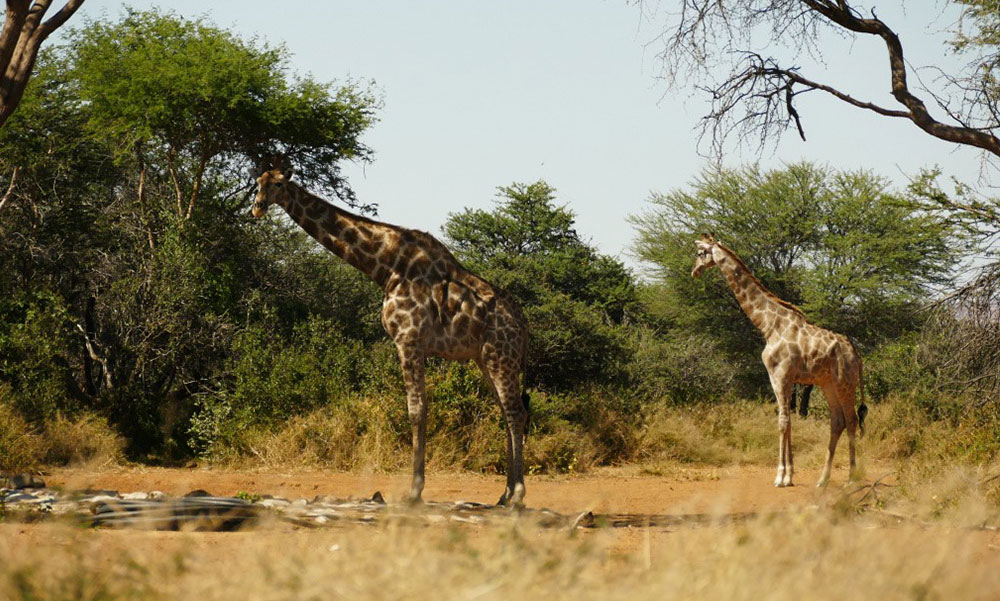 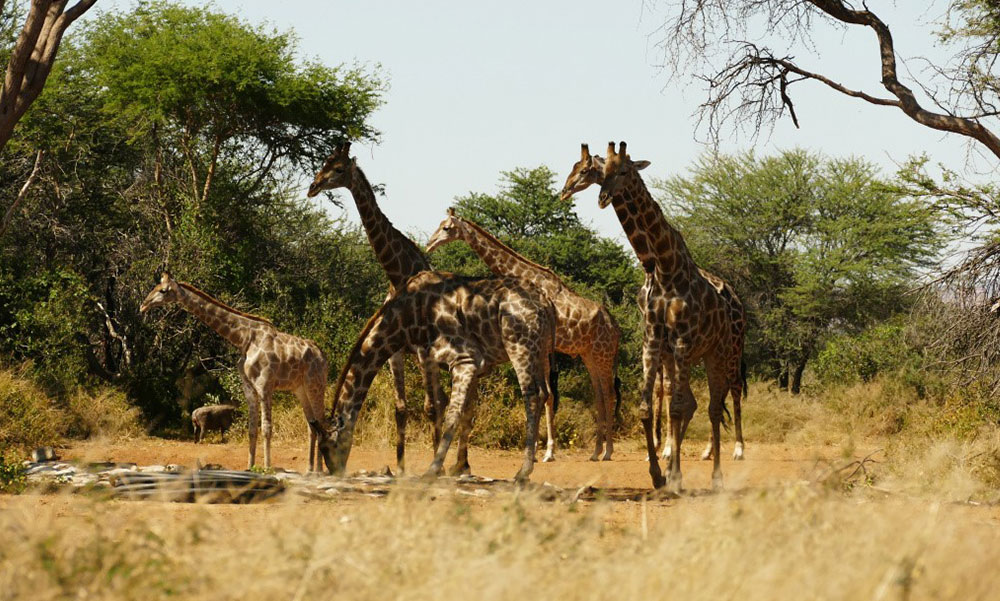 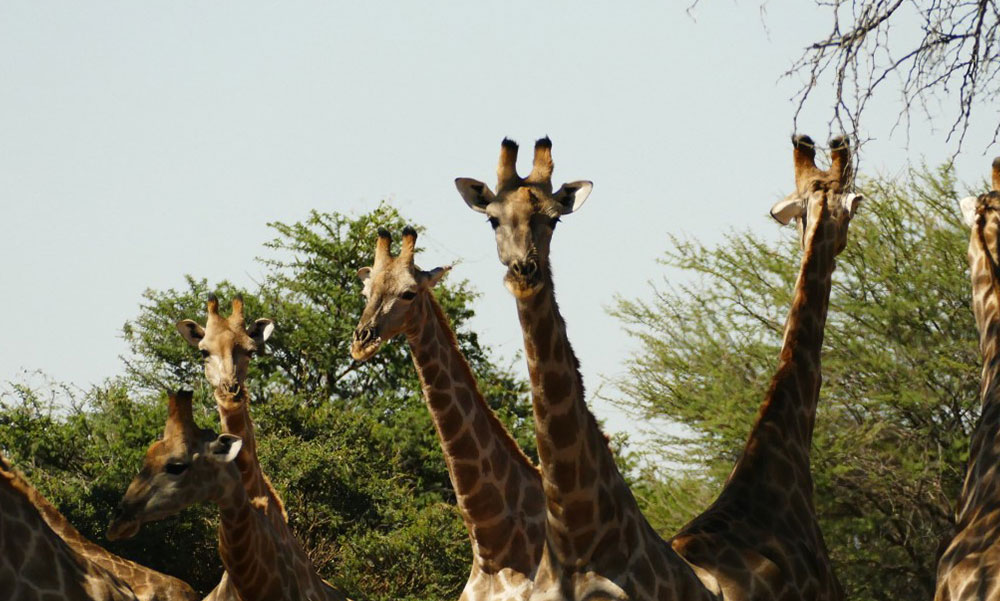 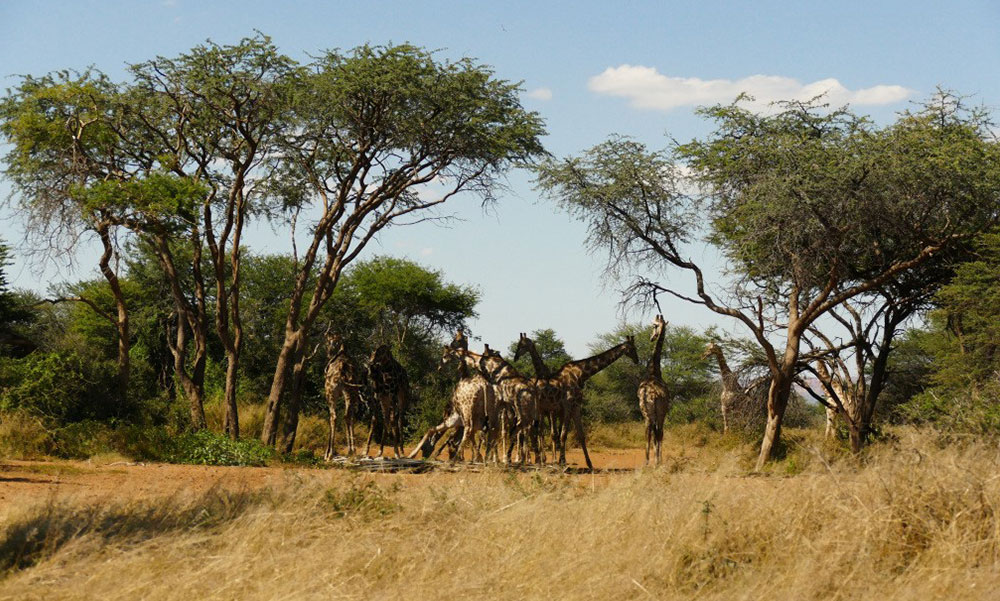 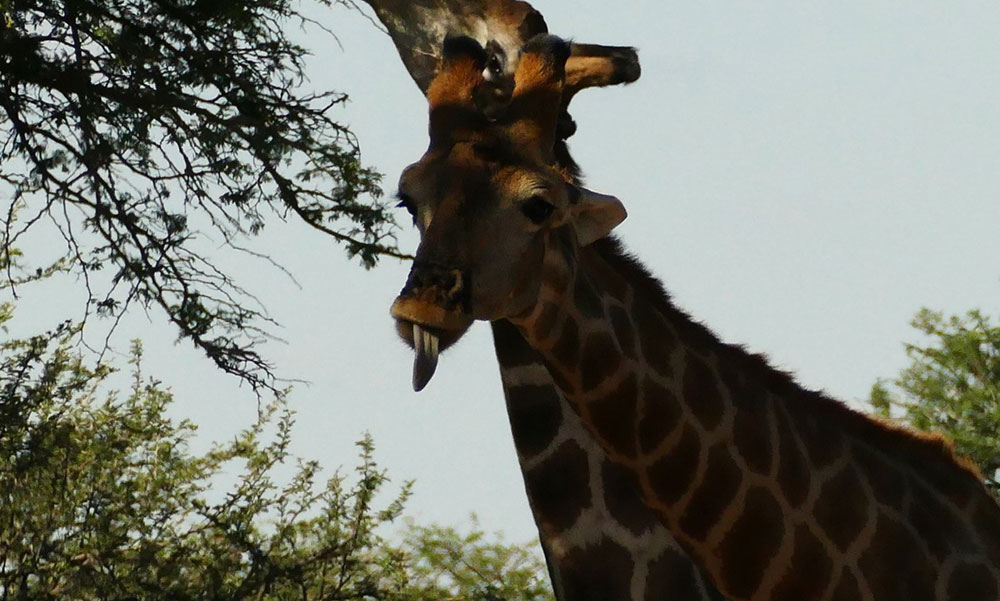 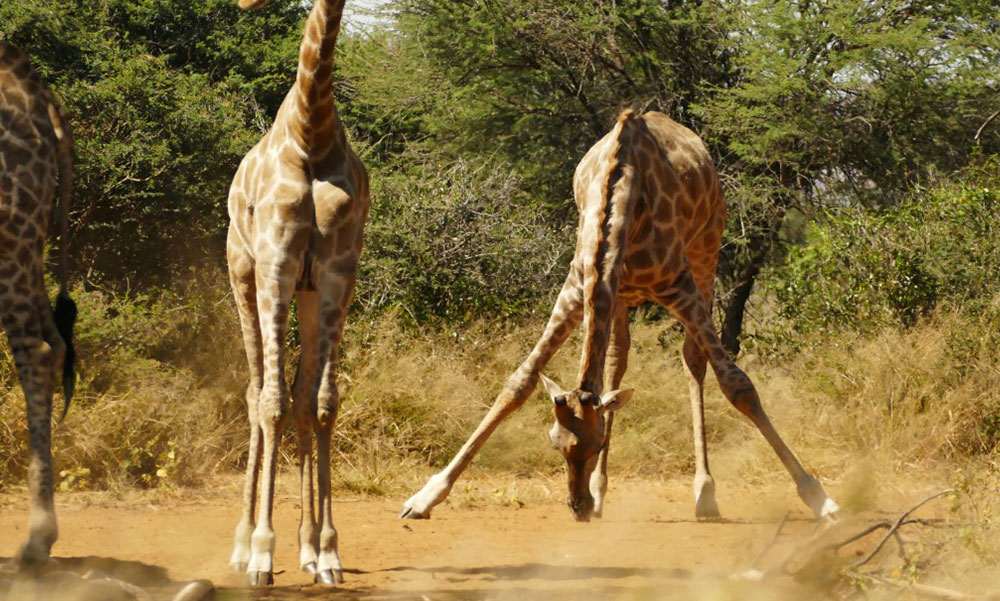 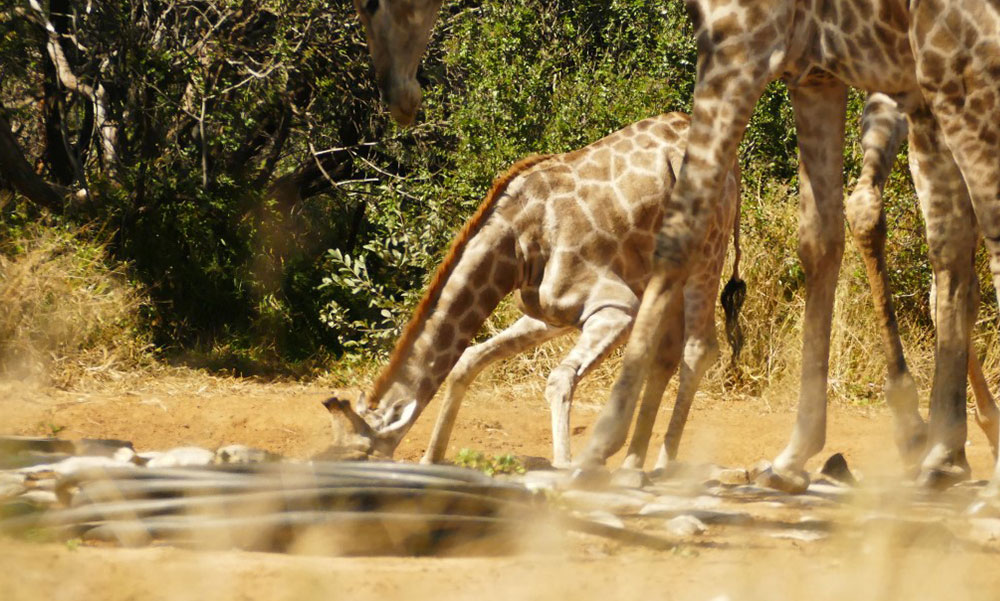 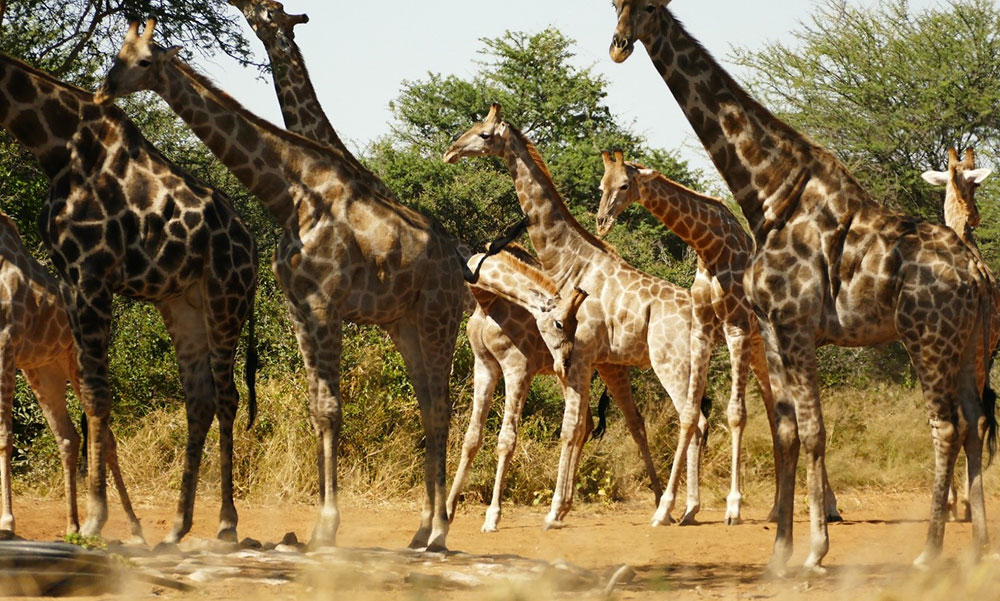 They spent nearly two hours around the waterhole. With their beautiful eye lashes, their unique fur pattern and their camel-like walk, giraffes are on top of my favourite animal list, so I appreciated every minute. Quite nice to see was their foraging and drinking behaviour. With their long neck they reach food sources that no other herbivore – apart from the elephant – can reach. Leaves up to 6 meters above the ground are no problem and with their long, purple tongue they rip the leaves off the acacia trees as if it is the easiest thing to do and as if these trees had no thorns.

But being the tallest mammal on earth has disadvantages, too: reaching the ground is an issue and makes drinking a risky undertaking. Giraffes must spread and squat their front legs before to get to the ground. It is spectacular to watch but this position makes them also very vulnerable towards predation. Luckily, they have been such a big group, so the vigilance issue in this case was solved!

Also nice to see was the “necking” behaviour of two subadult males, their way to sort out hierarchies. They were obviously just practising, and one of the two did not seem to be overly impressed by the attempt of his companion.

The leopard did not show up in the end. Apart from doves, warthogs, zebras, giraffes and a lonely male impala, nothing else came along. But still I so much enjoyed the time out there. Especially the coming and going of the warthogs and the relaxed “tower of giraffes” was nice to watch. When I initially thought that 12 hours are a long time, at the end, the they passed like nothing and I enjoyed the time with the animals.
What a lovely day!