Your support has allowed us to realize the highest record of success at rehabilitating and releasing orphaned, captive-raised cheetahs. The results of a long-term study on CCF’s rewilding program will soon be published and we are very pleased to announce that the cheetahs that CCF released during the study period, from 2004 – 2018, have demonstrated independence at a success rate of 75 – 96%!

As a research institution, our published data is important to share with the world, showing that our techniques for cheetah rehabilitation and release have been successful. The findings of our release study will help CCF’s rangewide conservation partners as they work to save the species. This is a big achievement, and it would not be possible without your help.

Over the past 30 years, we have come so far in our ability to study the cheetah and its ecosystem. Your support has allowed us to create a set of criteria for release, a methodology and set of protocols that helps us to put captured cheetahs back into the wild. CCF’s programs have allowed us to better support cheetahs post-release and (most importantly) to keep them from being taken from the wild in the first place. We are very thankful to have so much good news to report but we still have so much more to do. Our mission to save the cheetah in the wild continues.

From now until August 31st, you can make twice the impact toward CCF’s research, education, and conservation – the pillars upon which our success is built. During Chewbaaka’s Wild Cheetah Challenge, a group of dedicated donors are doubling your contributions up to $225,000. 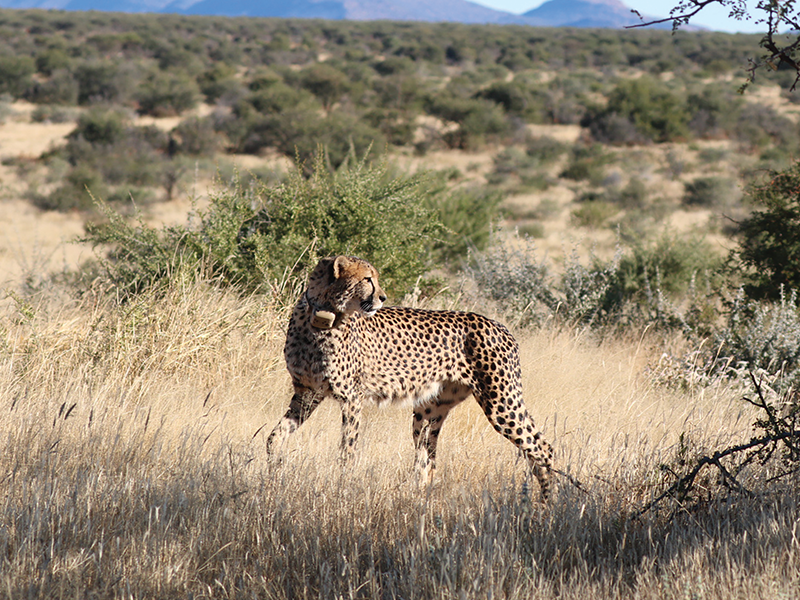 With careful selection of release candidates and release sites, and extraordinarily close monitoring before and after release, cheetahs can learn and use the survival skills they need to be returned to the wild and live normal cheetah lives. The ultimate measures of release success:

Cheetahs make themselves “at home”
Released cheetahs quickly adopt the behavioral routine expected of a wild cheetah and their survival estimates are like their wild counterparts. We support cheetahs with supplemental feedings during the cheetah’s initial release period but, very often, cheetahs will catch their own meal within the first week or so.

Cheetahs get together and make more cheetahs
We’ve tracked the birth and multi-generational growth of cheetah “family trees”. Rewilded released cheetahs support healthy genetic flow as they spread out across new ranges and territories. The released cheetahs live the wild lives they were meant to – hunting, fighting for territory, mating, and raising new generations of cheetahs.

Please donate during Chewbaaka’s Wild Cheetah Challenge. All gifts made before August 31, 2021 will make twice the impact toward CCF’s research, education, and conservation programs. Support our work to rehabilitate, release and rewild cheetahs across the species range.

CCF has shown the world that orphaned, captive-raised cheetahs can be returned to the wild. With your support we can continue to give cheetahs a second chance to live a wild life.

*CCF developed this methodological framework for the releases of 36 orphaned cheetahs between 2004 and 2018. Recommendations for the rehabilitation and release of wild-born, captive raised cheetah: the importance of pre- and post-release management for optimising survival, Eli H. Walker, Stijn Verschueren, Anne Schmidt-Küntzel, Laurie Marker. Paper not yet published.