The CCF BUSHBLOK Woodland Management Plan (WMP) aims to provide a management framework for the biomass operations of the CCF BUSH (PTY) Ltd. It strives to promote Namibia’s vision 2030 through the sustainable utilisation and management of natural resources in accordance with the Forest act 2001, and the Namibia forest development policy of 1998.

The plan prescribes methods of harvesting, suggest harvesting targets, multiple monitoring programs (ecologic, & socio-economic), and land use objectives. By selecting monitoring targets, a business subjected to adaptive management conditions can be developed. Policies related to the WMP (harvesting, fire, land use objectives, permits, were developed as control measures to prevent counter productive activities, and ensure that harvesting is conducted in accordance with the expectations of CCF BUSH PTY Ltd. 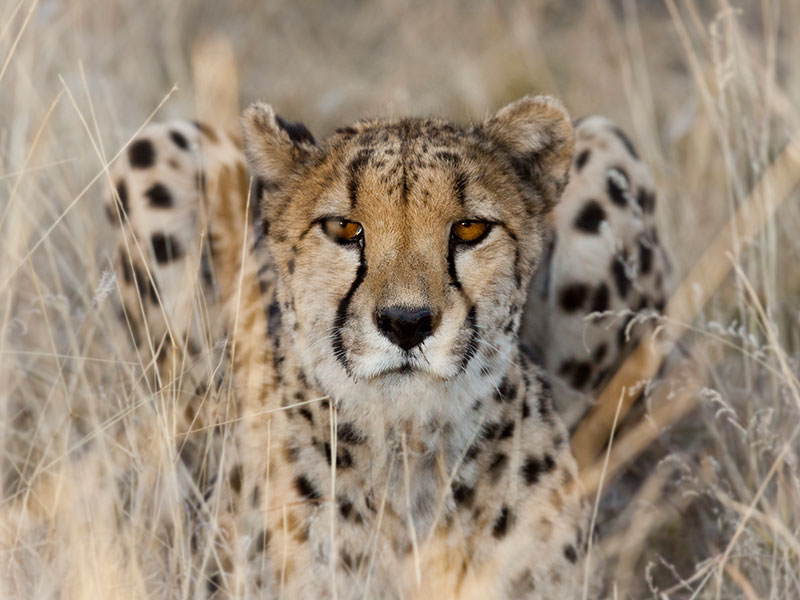 To be an internationally recognized centre of excellence in research and education on cheetahs and their ecosystems, working with all stakeholders to achieve best practice in the conservation and management of the world’s cheetahs.

CCF’s base of operations is in Namibia, which has the largest and one of the few sustainable populations of free-ranging cheetahs in the world. The cheetah’s survival depends on a total ecological system of farmland management, prey species management, and habitat stability.

CCF’s Namibia focus is to work with livestock farming communities in order to develop ways to reduce conflict. This is achieved by devising a conservation plan that secures habitat for the species, while still accommodating farmers’ land use needs. CCF carries out scientific research programs in areas such as cheetah population biology, cheetah ecology, cheetah health and reproduction, and human impacts on the cheetah. CCF researchers develop, test, and promote alternative land-management practices such as conservancy development, non-lethal predator control, relocation of problem cheetahs, and eco-tourism.

Additionally, CCF conducts both Namibian and international education programs to raise awareness of the cheetah’s endangered status. These illustrate ways in which the species can be protected and encourage worldwide support.

The Model Farms have been developed to research and display predator friendly and commercially viable livestock and wildlife programs. During 2003, the CCF bush PTY Ltd developed 50 economic plots (1 ha each = 50 e farm). These plots were used to assess the bush biomass yield per hectare, species composition, and stem densities of the tree/shrub species and the production potential. Educational groups and visiting farmers have the opportunity to see first hand that farmers and cheetahs can coexist. The farms also research and display innovative business initiatives such as: Bushblok compressed fuel log, made from invasive thorn bush, and Cheetah Country products, an eco label for Namibian beef and other products that would allow cheetah friendly farmers to sell at a premium price nationally and overseas.

The Elandsvreugde farm consists of a 1600 ha grass field (22% of the total area size) which supports hay production, and ecotourism activities. Ongoing ecological research activities are conducted on a regular basis, especially monthly game counts which were designed to study the trends in population structure and habitat use of different wildlife species on the farm. Smallstock farming is practiced consisting primarily of goats. In addition, Anatolian shepherds and Kangal dogs are bred at the centre as part of the Livestock Guarding Dog program. No large stock farming is practiced on the farm. Wildlife farming is the most dominant form of land use on the farm. This is the site of the main CCF campus and the Biomass Technology Demonstration Centre with the BUSHBLOK factory.

Farm Cheetahview contains accommodation facilities available to visitors, students and researchers. Both wildlife and livestock farming is the most dominant form of land use type. Various biodiversity studies have been conducted on the farm as part of the projects of the CCF BUSH PTY Ltd since 1998. The farm also contains accommodation facilities for the farm workers.

Farm Boskop contains accommodation facilities for CCF professional staff, and farm worker staff. Both livestock and wildlife farming are the most dominant form of land use type.

CCF manages seven other farms. Two (Osonanga Reserve and Osonanga Farming) are ecological reserve lands and five (Padberg, Otjenga, Bynaadar, Bellebenno, and JanHelpman) are cattle ranches. CCF Bush (Pty) Ltd will not undertake activities on those farms and has no responsibility for those farms.

CCF BUSH will conform to all Namibian labour law.  In addition:

CCF BUSH will not employ individuals under the age of 18.  Age will be verified by national identity documents/ passports/ driver’s license etc.

Employment relationships are voluntary and based on mutual consent, without any threat of penalty.  There is no forced nor compulsory labour.

All employment and occupation practices are non-discriminatory. Employment decisions are based on merit, qualifications, and competence. CCF BUSH is an equal opportunity employer and does not discriminate based on race, colour, religion, national origin, sex, age, marital status, disability, or any other status.

Freedom of Association and the effective right to Collective Bargaining.

Workers may establish or join worker organizations of their own choosing. CCF BUSH respects the rights of workers to engage in lawful activities related to forming, joining or assisting a workers’ organization, or to refrain from doing the same, and will not discriminate or punish workers for exercising these rights.

CCF will negotiate with lawfully established workers’ organizations and/ or duly selected representatives in good faith and with the best efforts to reach a collective bargaining agreement.