And yes—the race is still virtual! Sign up here.

The next race isn’t until December in honor of International Cheetah Day on December 4th, but it’s never too early to start training! Here are some pictures of racers from last year’s event. 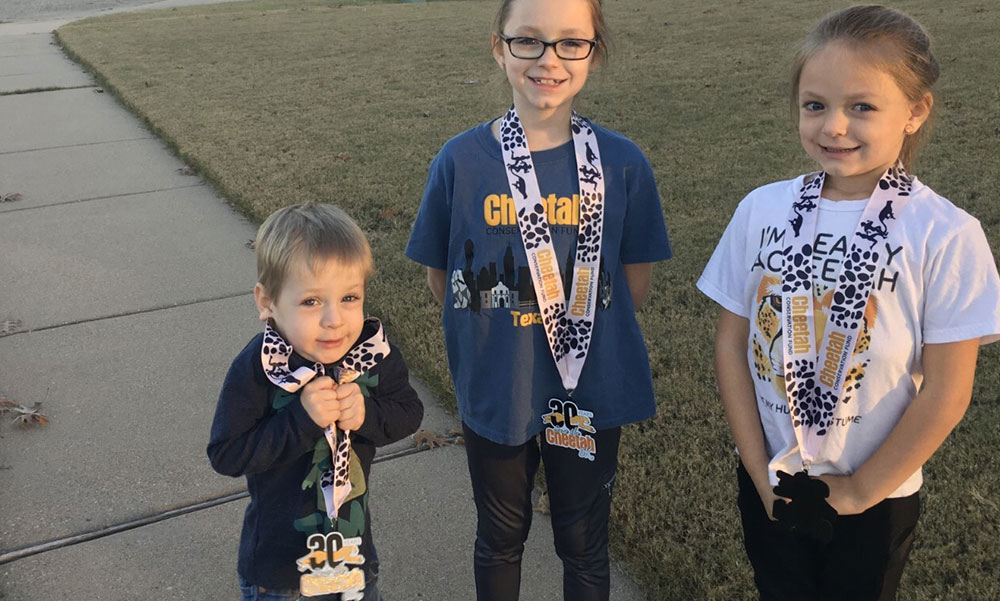 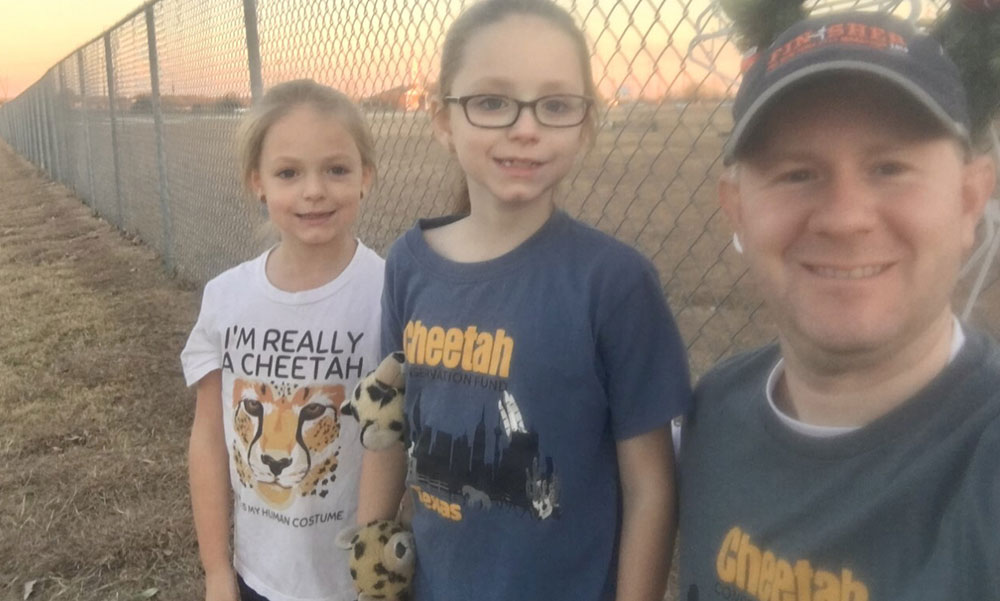 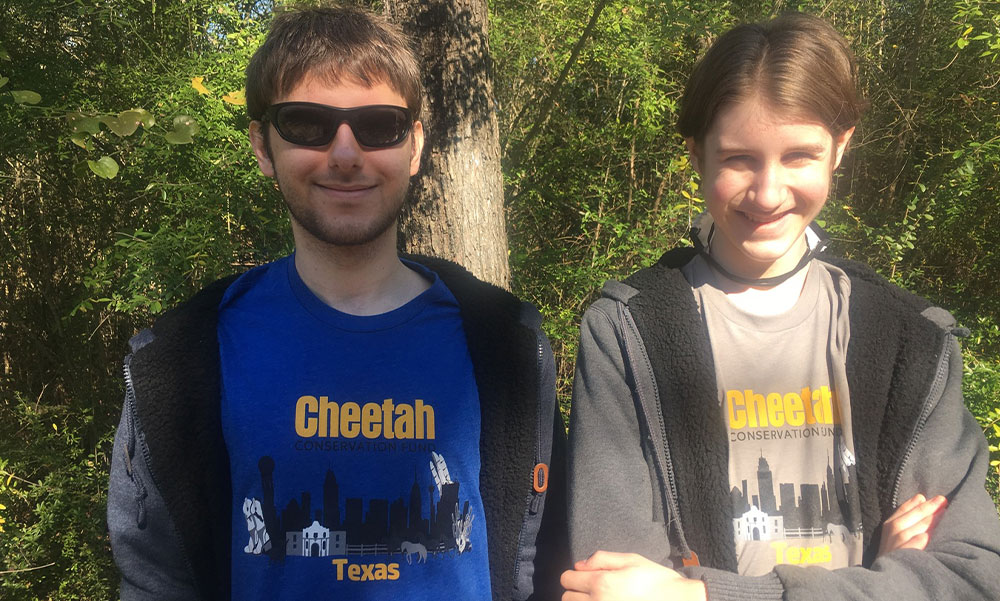 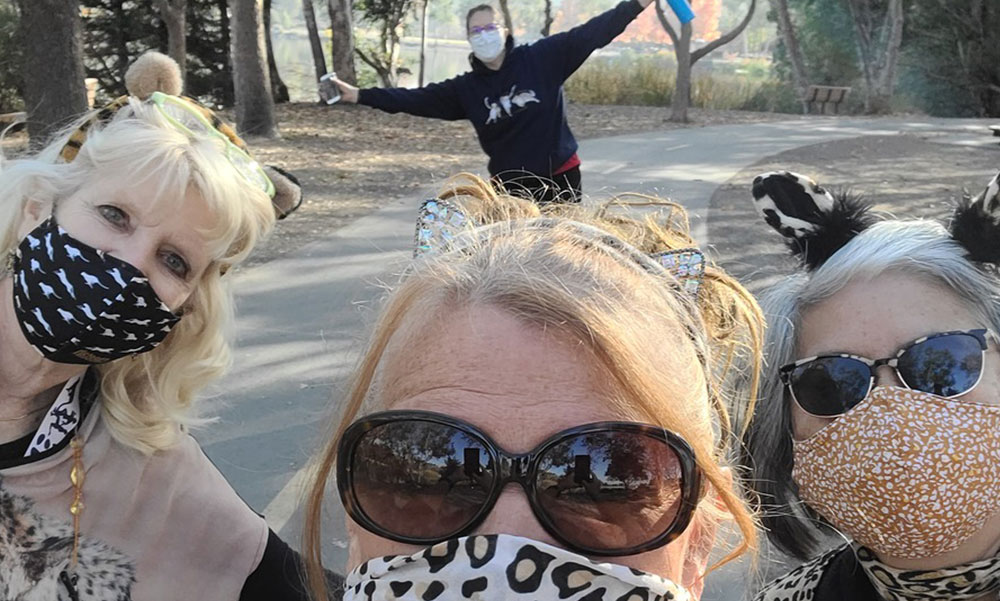 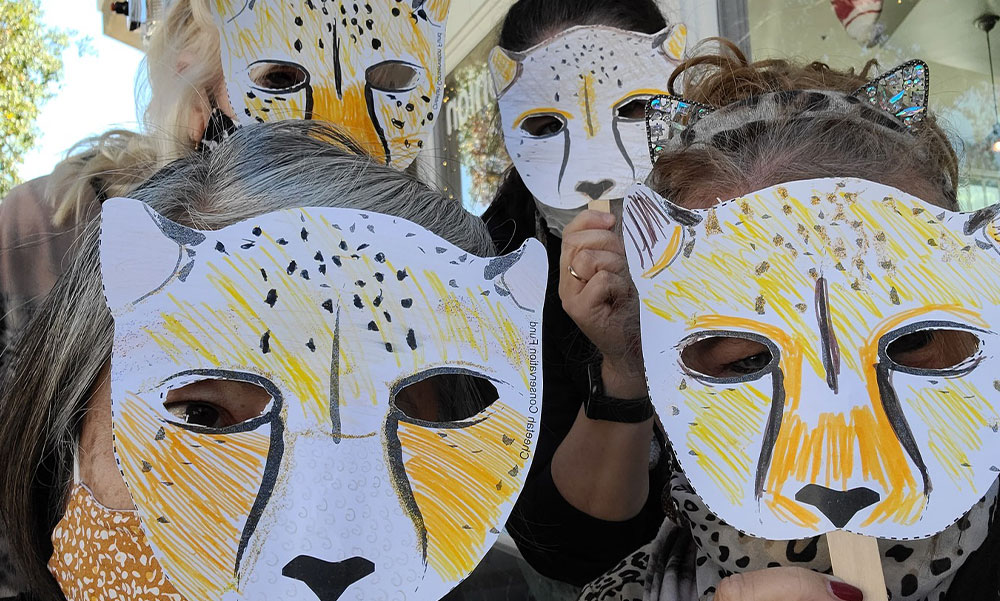 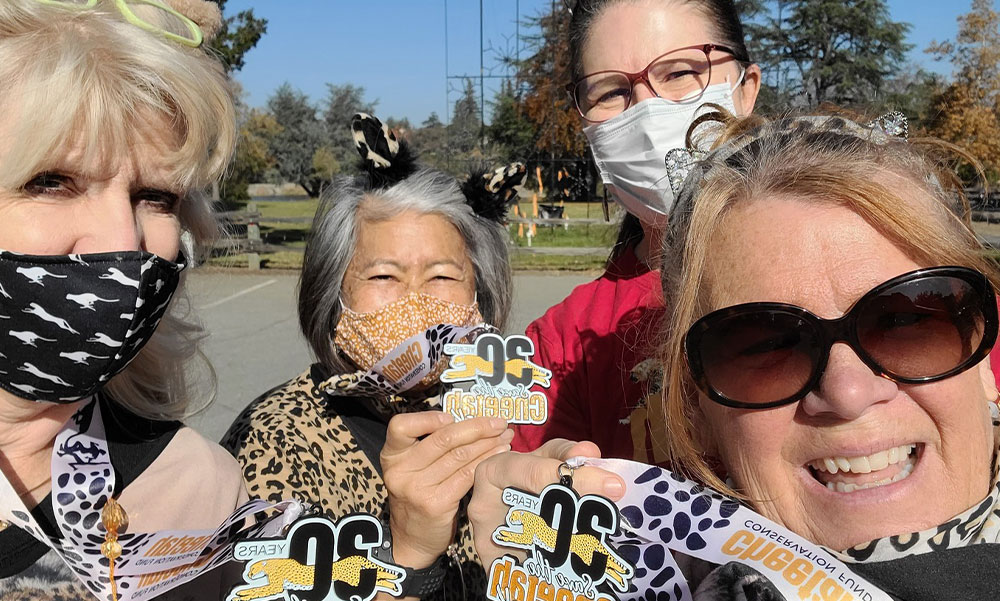 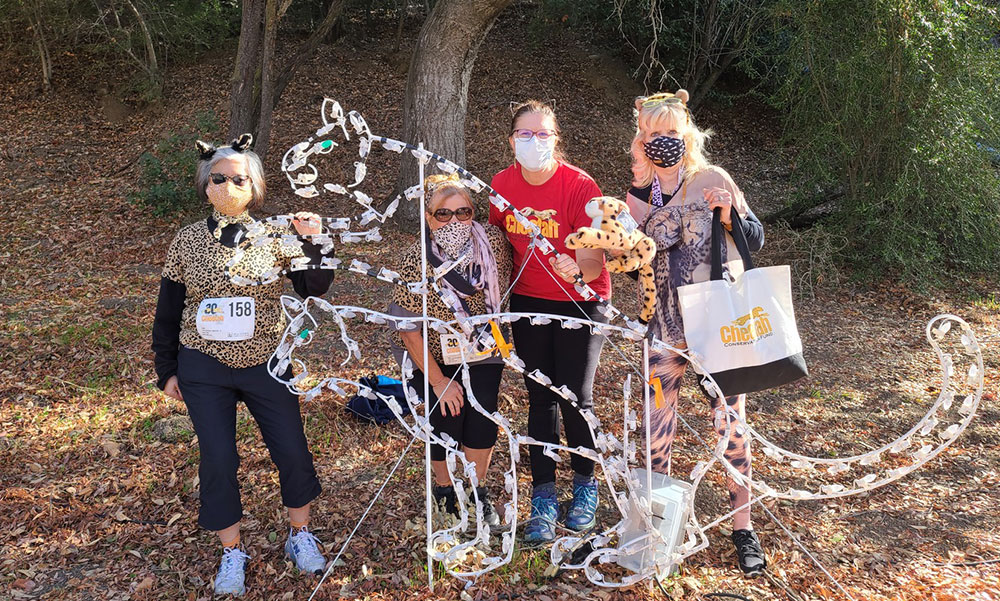 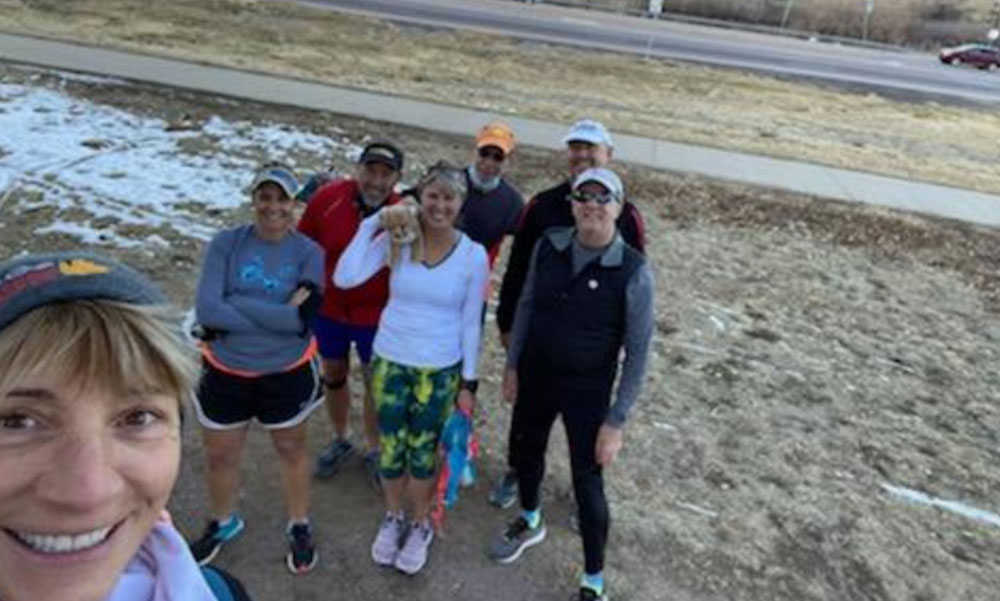 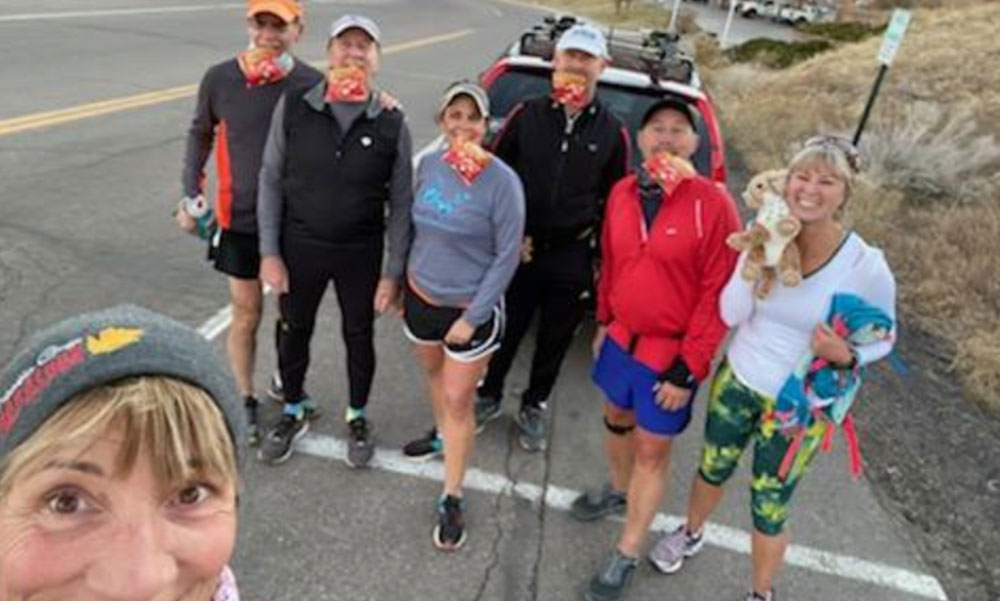 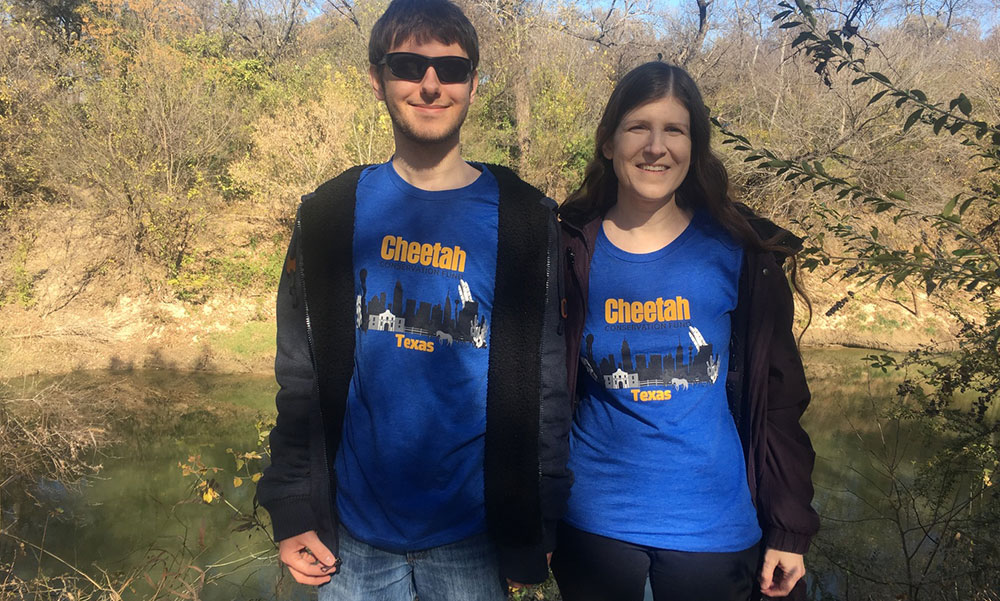 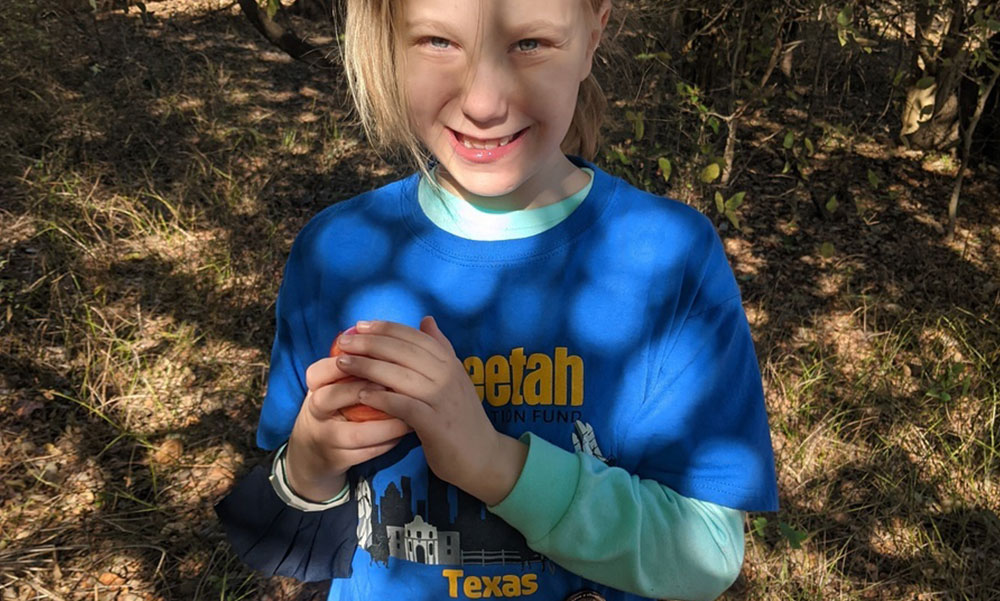 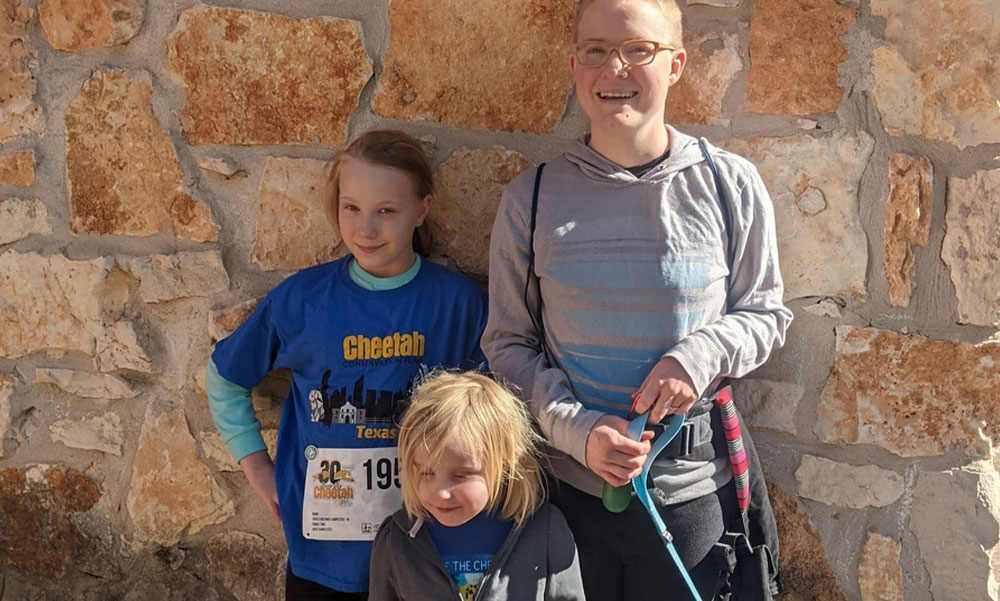 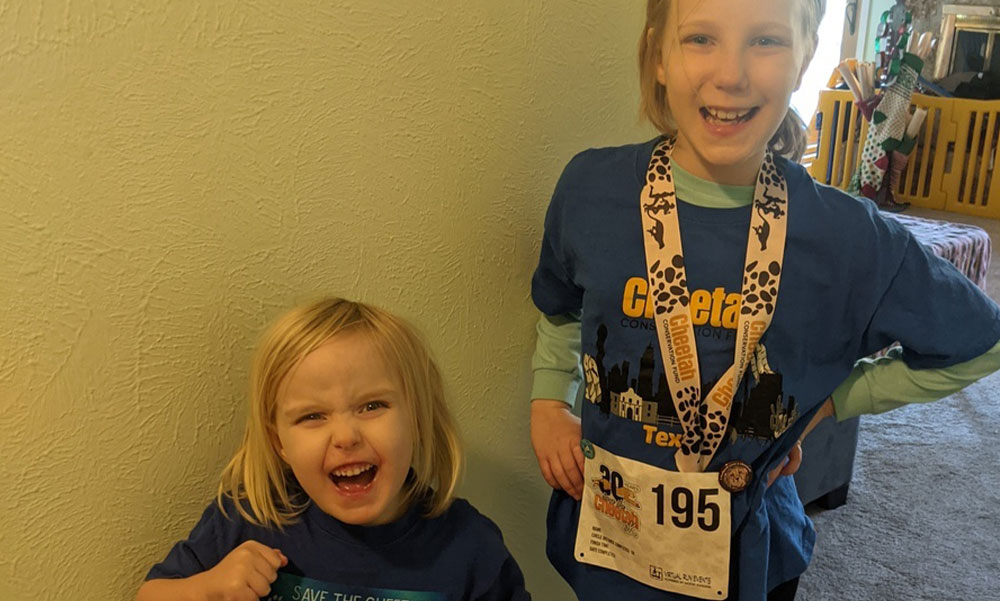 In March and April, we hosted a design contest for this year’s medal. Congratulations to Peggy Clark, winner of the contest! We loved the Namibian sunset Peggy chose for the body of the cheetah and the overall color scheme and the tail detail. (see the featured image at the top of this page) We were impressed!

Peggy has been interested and fascinated by wildlife as long as she can remember and would read Ranger Rick magazines and as many books on animals as she could find. Her interest in big cats was assisted as her favorite was the Carolina Panthers and the mascot of her high school was also a panther.

In Peggy’s own words, here’s why conservation is so important to her and why she chose to enter the medal design contest:

In 2004, when I was 8, I became especially interested in cheetahs… This was around the same time a historic litter of four cheetah cubs was born to Tumai at the National Zoo in Washington DC – significant as cheetahs don’t often successfully breed outside of the wild. Two of my favorite VHS videos were the National Geographic Season of the Cheetah documentary and the Kratt Brothers’ Maximum Cheetah Velocity. I loved watching cheetahs run, as they are one of the ultimate athletes of the animal kingdom. I liked how the cheetah was so unique even among the cat family and had adaptations for speed that other species didn’t.

Back in 2005, I thought that the cheetah didn’t get enough conservation attention compared to other endangered animals and appreciated the work of organizations like CCF that worked to save this species. One thing I was surprised to learn was how a variety of different programs like raising Anatolian shepherd dogs helps conserve cheetahs. With so many species in decline, it’s necessary that livestock farmers and ranchers start finding ways of coexisting with wildlife instead of killing off the predators who play an essential role in their environment.

Reading about CCF taught me about holistic conservation and the many different aspects that go into conserving an endangered species and how the whole ecosystem is involved.

I found out that it’s a lot more involved than just preventing poachers and farmers from killing them. Helping cheetahs helps many other species thrive as well. I learned that held true for large carnivore conservation in other parts of the world, too—conserving jaguars in Central and South America also benefits the other species living in the habitat.

My admiration for the cheetah’s speed helped raise my interest in running at an early age as well. In junior high and high school, I competed on the cross-country and track teams, and was part of a team that won two state championships during my four years. At age 25, I still run regularly on paths and trails for recreation. So cheetahs and running are two things that have been an important part of my life for a long time.

While Peggy is the winner, we want to highlight a few of the great submissions we received!

First, we have Grace Witte! We love how much color she used in her design. Grace is 6 years old and says, “When I grow up, I want to have a zoo that can help endangered animals, and I especially want to help the cheetahs because they’re my favorite animal.”

Next, we have Zoe Oakes, age 7, who is a runner!  We love that she chose to add a second cheetah to this design! Zoe says, “I love that cheetahs are the fastest land mammals. Sometimes when baby cheetahs see their moms trying to catch prey, they want to copy her, so one or two of them try running off. Baby cheetahs are the cutest animals I’ve ever seen. They’re too cute to look at sometimes.”

Finally, Allie Cottrell age 9, suggested that her softball team call themselves “the cheetahs” because she was inspired by the work the CCF does. Her team colors are yellow and black, and she’s the fastest runner on the team! We love the sunrise behind the cheetah and the cheetah spots on the edge of the medal.

Thank you to everyone who submitted! We appreciate your efforts. And we hope to see all of your pictures come December as you participate in the Save The Cheetah Race!

Through fundraising, outreach, and education we work within the USA to support the Cheetah Conservation Fund.